Bella had only just begun her new occupation, and so she knew nothing of men. There was no chance that she would have acquired any diseases. A man named Hamilton, one of the King’s most trusted servants, inquired into her background and then brought her to the King, who was still actively engaged in the war.

Selgratis liked Bella more than he had anticipated. Upper-class courtesans never said what they met, speaking in metaphors with a vague smile on their lips. Bella was incredibly candid. Though she lacked education, she had her own charm. Selgratis found her quite refreshing, and as she began to eat well, she gained enough weight to acquire some dignity and grace.

From the first time they spent the night together, the King kept Bella in his tent. The campaign was going to be protracted anyway, until the resistance was wiped out, and he preferred to have a woman on hand that he could embrace comfortably.

It wasn’t long before Bella discovered she was pregnant, and as she never left the King’s tent, there was no doubt that he was the father. Selgratis grew even more concerned that she would eat well, and held her carefully every night.

Then the rebellion came to an end.

“What shall we do with her, Majesty?” asked Hamilton, as Selgratis was preparing to leave. It had been eight months since his arrival, and with all the Letan resistance eliminated, he could no longer leave the capital of Deltium alone. The time had come to decide what must be done with Bella March.

“Let the child be born,” the King said, glancing back. “And give him funds for maintenance. We might as well part ways here, I can’t bring a commoner to the palace. My betrothed would not approve.”

It was exactly the proper decision. Selgratis had shared the beds of other women, even several courtesans at once. But this was the first time he had ever lived with any woman. Bella March was the King’s first mistress.

Hamilton had feared that the King might become infatuated with her, and make some unwise decision. It was still the early days of his rule, after all, and there was some instability among the aristocracy. But fortunately, the King did not forget his duty. Posted only on NovelUtopia

Relieved, Hamilton was about to turn away.

“Ah,” the King added. “I’d appreciate it if you could look in on the child. He is an illegitimate child, but he is my first son. I would like to be informed how he fares.”

If it were not for this afterthought, then Raphael, the Marquis of Carnesis, might not exist.

Hamilton was still young enough at the time to be zealous in his duty, and so he paid regular visits to Bella to check on Raphael’s condition, and provide her with support for the child. Hamilton was the one that verified the child’s sex, and even gave him his name.

If it had not been for Hamilton, Raphael’s talent would have been swallowed by the slums before it was ever recognized.

Or he would have died at the hands of his mother.

Raphael’s mother could consider herself most fortunate. The first person she had ever sold herself to was the King, which was a miracle for a pr0stitute in the slums.

At the cost of selling herself for eight months, she would be paid a monthly fee forever. Or rather, as an allowance for her son. But that amount of money was the equivalent of being a millionaire in a place like this. Even though he was an illegitimate child, Raphael was receiving an amount befitting a son of the King.

In theory, Bella should have been content. Even if she did nothing but sit still, she would have money to spare every month. She needed do nothing but devote herself to raising her son. But reality always offered new twists to the story.

“Bella, really, it’s just this once. If you help me pay my debts, I will never gamble again til I die. So, please…”

Ben had protected Bella when they were children. But the brother she had known was gone, and now he was a millstone around her neck.

After visiting a casino a few times with his friends, Ben was completely hooked. Every visit, he ended up owing the casino a large sum of money, and Bella had to pay it back. As soon as Raphael’s support money arrived every month, it was immediately snapped up by the casino. And now that Ben had a financial supporter, he only became more obsessed. It was a vicious cycle.

Clutching Raphael in her arms, Bella reproached her brother with a trembling voice.

“That’s what you said last time, what are you doing? You can’t live like this! If you don’t stop, we’re all going to die, don’t you know that? You, me, and Raphael will all die!”

“I know. I’m really sorry. Please, just this one…don’t tell me you’d let me die, huh? I swear to God, this is the last time…”

Do you want to support and enjoy advanced chapters? Click here

A fanart of baby Raphael made by our editor Kitten 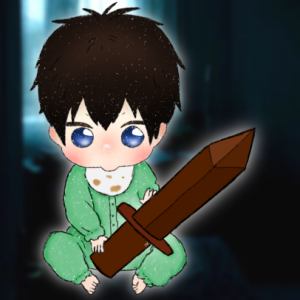