“Who wants to be her lady-in-waiting?!”

Heinley coughed while drinking a glass of water.

Heinley repeated his question, fanning his flushed face with one hand.

“Why? She was so dedicated to being Miss Mastas that I guess she wants to take advantage of this opportunity.”

“Why was she so obsessed with that?”

The siblings Aprin and Mastas belong to the Underground Knights, formed by Heinley with ‘his own people.’

They were not just ordinary members, though. Aprin was the Underground Knights’ leader, and his sister, Mastas, was the commander of the second division.

Their identity was currently veiled so that missions could be carried out in secret, but Heinley planned to reveal the Underground Knights and have them become his own knights once he proclaimed himself emperor.

However, he could not believe that the commander of the second division was going to become the queen’s lady-in-waiting.

Heinley pressed his hand to his forehead due to the oncoming headache.

He appreciated Mastas as his subordinate, but he did not want to have her as his wife’s lady-in-waiting.

She was even famous within the Underground Knights for being rough with her hands.

‘So, would she cut my wife’s steak with the same hands as she cut off her enemies’ heads?’

“This is all because of Sir Aprin. He was so obsessed with Lord Koshar that he chased him everywhere. In the end, it resulted in this.”

“Wait. What are you talking about? Who was obsessed with who?”

“Sir Aprin. He wanted to introduce his sister to Lord Koshar, so he chased him every day while Your Majesty was away.”

“Sir Aprin must have used his head for this. If his sister becomes a lady-in-waiting for the queen, she will naturally have the opportunity to meet Lord Koshar. For Sir Mastas, becoming the queen’s lady-in-waiting would make her a lady that no one could ignore. I am sure he persuaded her that way.”

Heinley opened his mouth in puzzlement.

Then McKenna asked him.

“Your Majesty, changing the subject, are you going to train tonight? You must be very tired. Would you like me to cancel?”

After spending a day with Mastas, I was even more indecisive. She was lousy as a lady-in-waiting, but I liked her very much as a person.

She had been knighted. She was really great and disciplined in her every action.

Also, she was only difficult at first, but once she understood what a lady-in-waiting was doing, she performed quite well.

Unlike her fearsome aura, she had a very gentle personality.

I don’t know why, but as I spoke she looked at my profile in a daze.

Honestly, she was cute.

If I hadn’t asked her to have a ‘mock high society argument,’ I might have taken her as a lady-in-waiting anyway.

But after the ‘mock high society argument,’ I knew that I should not let Mastas be my lady-in-waiting.

Less than five minutes after the argument started, she pulled out her lance and shouted,

“I swear by this spear, that I speak the truth. If it is a lie, I will give you my head, otherwise you will give me yours.”

There are times when the ladies-in-waiting argue on behalf of the empress or the queen.
For that reason, I made a mock argument. The result was obvious.

She made small mistakes and was impulsive in front of me. Nothing else mattered, if she did this at a high society gathering…

Although my brother was also impulsive, I could not have such a lady-in-waiting.

But because of the confession Mastas made awkwardly before leaving, I could not immediately refuse her by saying, “I cannot have you as my lady-in-waiting.”

“I didn’t even hear you say that you would cut off my finger for making a mistake… The queen is really kind.”

I became worried about the environment she was coming from, where someone would cut off your fingers for making mistakes.

Rose gave me some serious advice as soon as Mastas left.

“Ladies-in-waiting are not chosen with the heart, Your Majesty. Never, absolutely never. Especially now, when the queen is being compared to Christa. You should not become a laughing stock because of a lady-in-waiting.”

“Both Sir Aprin and Sir Mastas, are oddballs who were knighted, but are not even accepted by the knights themselves. You must not get involved with them, Your Majesty.”

Even if Rose didn’t say it, I have always paid a lot of attention to the etiquette of my ladies-in-waiting.

The ladies-in-waiting were like my mirrors; at times I would have to take responsibility for their actions mistakes.

Even Laura, my most energetic and outspoken lady-in-waiting, used textbook etiquette when necessary.

But Mastas… was a burden.

What if she stabbed someone with her spear at a party after I make her my lady-in-waiting based on feelings?

Despite this, I still liked her.

Maybe it’s because not many people have taken my side since I arrived in the Western Kingdom.

She wasn’t someone I had planned to have by my side, like Rose.

Eventually, I left the detached palace alone without finding an answer.

I had no one to guide me, but I had already memorized all the paths. Especially this area, which I had memorized perfectly.

I was not afraid to get lost, so I was going to walk alone to breathe the night air. Breathing the night air would help calm me down and organize my thoughts.

By the way, how long have I been walking?

When I heard a fluttering sound, I looked up and could see big birds flying in a row.

I blinked, rubbing my eyes with my hands before looking at the birds again.

‘Is it an illusion?’

Is that really Queen over there…?

I would have been sure if I had also seen the blue bird.

But at first glance there was no blue bird, so I wondered if I had really seen Queen.

I hesitated for a moment, and then followed the birds in the direction they were flying in, arriving at an abandoned palace from which it was rumored ‘ghosts came out of.’

Rose was very frightened when she told me about this place. When I asked her why the abandoned palace where such rumors were circulating was still intact, she replied that all the workers who tried to knock it down ran away after seeing the ghosts.

However, I am not afraid of that, so I went straight in.

But when I heard a splash coming from the central fountain, I involuntarily shuddered.

‘Are there really ghosts here?’

After hiding behind a pillar, I looked into the fountain. Peeking out, I could see a bird in the fountain’s water jet.

I laughed, thinking I had gotten too scared. Embarrassed that I was afraid of ghosts, I bit my lower lip and looked at the fountain. The bird inside was splashing water around with its wings.

‘So I was right, the bird I had seen was really Queen.’

But where did the other birds go, and why was Queen alone here…?

I was puzzled, but continued to watch.

The bird, now turned into a man, brushed back his light blond hair that was wet and stuck to his face with one hand as he grumbled.

I covered my mouth to prevent a scream from sounding out.

The man was… a naked Heinley. 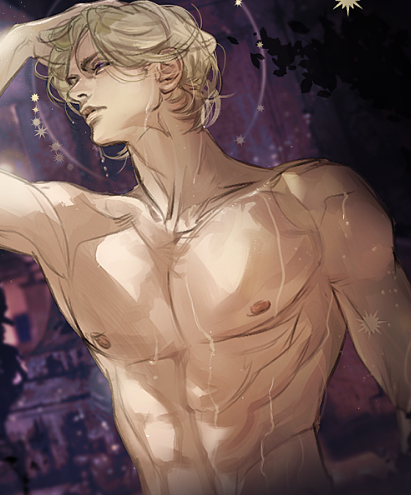