I froze as I stared dumbfounded at his naked body.

His body was submerged up to his thighs in the fountain, leaving everything above exposed.

His body was packed with muscle, as I had assumed in the past when he escorted me.

He looked very different from when he was wearing clothes.

His abdomen, thighs, collarbone, and broad back made him look like a statue in a temple.

His beautiful wet skin looked somewhat sensual, and his handsome face was completely visible with his hair flipped back.

Water droplets glistened all over his body under the moonlight, making him look like an elf.

However, he also had a strange part attached to his body.

That huge part… I don’t think any statue in a temple would have it, nor would an elf.

‘When he turned into a bird, did he lose his clothes?’

I suspected that Queen was Heinley. However, checking it out with my own eyes made my heart beat very fast. Especially because I saw him in a very stimulating way.

‘Although I had suspected he was a bird; I didn’t expect him to be naked…’

So, I hugged, kissed and patted Heinley on the rear…! 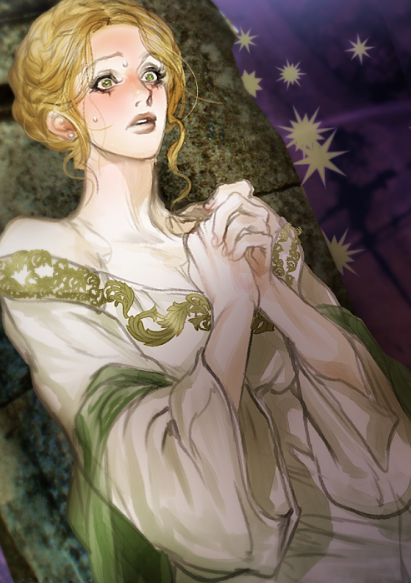 To prevent myself from screaming, I bit my tongue hard.

Seeing Heinley’s naked body in front of me, I was thinking about what I had done when I had him in my arms.

I should be mad at Heinley for deceiving me, for being so cruel and for separating me from ‘Queen’.

But I was too bewildered that I couldn’t even feel angry.

Besides, I was too embarrassed.

As I bit my lips, Heinley came out of the fountain and went somewhere.

After waiting there for a moment, I looked around and hurried back to the detached palace.

‘Angry… I should be angry.’

As soon as I got back to my room, and racked my brains trying to get out as much anger as possible.

I should be angry at him for deceiving me without intentionally letting him know of what I had been feeling.

It was only normal to feel this way.

But no matter how hard I tried, all I could think about was his naked body.

His naked body left…a strong impression on me. It dwelled on my mind.

I wanted to give Heinley a chance to be honest.

Since he said that everything about the bird tribe was confidential, I had never thought that he intentionally deceived me.

So now that we are married, I wanted to give him a chance to be honest.

But what if he were to admit it honestly?

Naturally, he’ll think of me hugging him and patting his rear… Again, the Heinley that appeared in the fountain had appeared like an illusion.

Finally, I buried my head in a pillow.

‘…Should I pretend not to know?’

“So Navier is in the Western Kingdom…”

After receiving the report from his subordinate, Sovieshu smiled and rested his hand on his forehead.

“Yes, she settled in the royal palace.”

Sovieshu laughed as if he was listening to a good joke.

He continued to laugh out loud in a state of despondency. The strong sense of betrayal made him shudder.

As angry as she was, how… how could she immediately become the queen of another country?

He could not understand it at all.

If she didn’t harbor any feelings for him from the beginning, how could she remarry so soon?

He regretted burning the letters she exchanged with Heinley. Perhaps there was a secret message hidden in those seemingly ordinary letters.

Sovieshu suppressed his anger and ordered his subordinate to leave. As soon as he left, he gritted his teeth and stomped his foot.

Navier had been his wife from a very young age. Not a concubine, but a wife. A wife who had always been by his side and should continue to be by his side in the future.

Other than that, the Navier Family was a prestigious family that produced empresses.

The empress did not leave the same family all the time to avoid marriage between close relatives.

But among all the families, it was the most prestigious for having produced the largest number of empresses.

‘A woman from that family married the King of the Western Kingdom?’

Sovieshu clenched his fist and punched the wall repeatedly.

Surely she was angry, but isn’t there a line that must not be crossed?

Sovieshu in the end could not calm his anger, so he called Marquis Karl and ordered,

“My wedding to Rashta must be hastened.”

“We should have the wedding before the baby is born. But a wedding is also exhausting, so it’s better to do it before the pregnancy is too far along.”

“I want the wedding to be as grand as possible.”

Marquis Karl nodded and looked worriedly at Sovieshu. Only now did he notice that Sovieshu was more agitated than usual.

Marquis Karl also noticed that the area around Sovieshu’s eyes was slightly reddened.

“Navier will have to come to the wedding… I’ll make her regret it.”

Navier had not yet had her wedding. If she was going to have a wedding, the invitations would also arrive here.

He intended to have his wedding before Navier’s, so that Navier would regret it when she saw his splendid, grandiose wedding.

He knew this was shameful, but he had no other way to appease his anger.

After venting inside, Sovieshu asked casually as he struggled to calm his agitated mind.

“What is the public opinion about Rashta now?”

“It has always been good, but now it is better because of the rejection of Navier’s actions.”

Not that they expected Rashta to become the empress. On the contrary, even those who were close to Rashta were more likely to be shocked if she became the empress.

Although not many commoners became empresses, the nobles always opposed those who did.

Of course, she now had noble parents, but the early image of her would not disappear so easily.

“Public opinion is important to Rashta.”

“Yes. But… I don’t know if the current public opinion will remain as it was when it’s finally announced that Miss Rashta will take the position of the empress.”

Sovieshu, who had repeatedly clenched and extended his fists, finally sat down at his desk and ordered,

“Give Rashta’s parents a worthy honorary position to look after their image.”

To interact in our community, enter our Discord → Discord Server