Heinley stared at me dumbfounded. He didn’t seem to comprehend what I had just said.

I took a breath to appear as calm as possible. It was hard for me to say it twice. 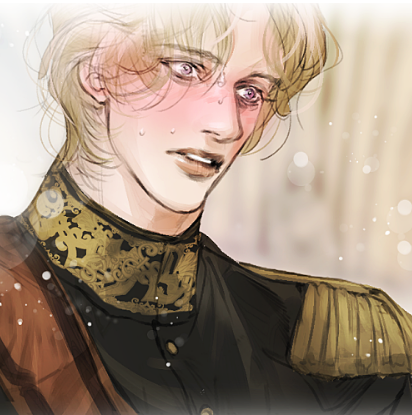 “I… I see,” he finally mumbled, half covering his face with his hands, “You saw me… ah, that’s why you avoided looking me in the eyes…”

“Honestly… One moment,” he stopped to turn around and quickly fanned himself with his hands.

It certainly wasn’t intentional. Not only was his neck red but so were his ears.

Heinley turned around again after a while, but from the looks of it, fanning himself didn’t seem to have any effect.

Heinley asked as he grabbed his neck, “By the way, where did you see me like that?”

“I saw you at the fountain in the abandoned palace.”

“You were soaked with water.”

Heinley again covered his face with both hands.

On the other hand, by telling the truth, my initial embarrassment lessened.

The power of the truth was immeasurable.

I was still embarrassed, but at least now I can talk to him face to face. But now Heinley is the one unable to look me in the face.

The office went temporarily silent. I didn’t feel uncomfortable, but for some reason, I couldn’t open my mouth.

I wanted to talk to him, but at the same time, I didn’t want to say anything.

The atmosphere was extremely strange.

Wouldn’t it be better to… just hold hands in silence at a time like this?

As soon as I thought about it, Heinley reached out his hand and touched my fingertips, as though he was hesitating to do so.

I looked away and grabbed his fingertips. Instantly, his body faintly trembled.

When I looked up at him, I saw Heinley smiling as he looked at me. The moment our eyes met, he grasped my hand tightly and asked with an even wider smile, “Have you eaten yet?”

When I nodded, he intertwined his fingers with mine and walked over to the desk, pushing the small bell on the side.

A moment later, an attendant entered. The attendant flinched when his gaze flicked over to our intertwined hands.

Feeling more embarrassed, I turned my head toward the window.

We were in the middle of eating.

It was awkward at first, but as we talked, that feeling gradually dissipated. At one point, we even began to talk more comfortably, but then Heinley asked carefully, “By the way Queen, does the image of me really keep popping up in your mind?”

As soon as I heard that, the end of the salad cabbage got stuck in my throat. He quickly offered me a glass of water when I started coughing.

“It must be true if you’re so surprised about it.”

After having some water, I responded firmly, “Not anymore.”

Of course, it was a lie, but there was no way to tell.

“No. That’s not what you said a moment ago.”

“You misunderstood me,” I lied once again.

But he was persistent and asked again, ignoring my words, “Queen. Does my image keep popping up in your mind?”

“After our wedding, I’ll be able to show you my body every day.”

Although I drank some more water to avoid choking, it was unavoidable when I heard his words. Tears welled up in my eyes as I coughed.

I glared at him sharply. Heinley lowered his eyes shyly in response and held out a handkerchief to me.

But he immediately regretted it and put it away.

However, I had already recognized the handkerchief.

It was the handkerchief that had been tied around Queen’s neck.

I confronted him, “Isn’t that mine?”

Hearing my confident tone, Heinley reluctantly handed me the handkerchief and defended himself, “You didn’t ask me to give it back…”

“Because I gave it to the bird.”

I was about to argue back, but suddenly the thought of Heinley’s neck intruded into my mind.

Heinley is naked when he becomes Queen. Does that mean that, at the time, he was naked with a handkerchief tied around his neck?

…don’t think about it.

It was a very embarrassing image, so I handed the handkerchief back to him instead of arguing.

“I wasn’t thinking anything.”

Heinley, who was folding the handkerchief, bit his lips hard.

Because of my thoughts, I ended up saying something I shouldn’t have. So I deliberately put on a cold expression.

But instead of stopping there, Heinley whispered with a smirk, “Queen. If there’s anything you want to see, you can tell me.”

Sovieshu repeatedly folded and unfolded the newspaper throughout the night.

He read Navier’s interview from cover to cover, over and over again. He had no idea how many times he had done it.

Even after memorizing the interview word for word, Sovieshu could not take his eyes off the paper.

He felt his heart twisting, the pain so strong that he couldn’t sleep.

‘Did she hear when I promised Rashta that I would divorce her? Did Navier hear it with her own ears?’

It was hard to guess how much it had affected her because of her proud personality.

He was finding it difficult to breathe, it was like he was suffocating. He felt like his head was about to explode as his heart twisted and turned.

Sovieshu pounded his heart with his fist several times. For some reason, just thinking about it was painful.

He kept repeating this action throughout the night. By the time the sun rose, even just touching that area caused him pain.

His servants noticed his bruises when they helped him change his clothes. After instructing the alarmed servants not to make a fuss, Sovieshu ordered Marquis Karl to be summoned. He sat on the bed and closed his eyes.

As time went on, he began to think that this must have been some kind of misunderstanding.