Sovieshu, who had instructed Marquis Karl about the wedding, asked him how the wedding preparations were going. After discussing what silks to use, what other people to invite, etc., he went to Rashta’s room.

Rashta was trying on a dress at the moment.

The new dress was almost finished and she was trying it on, so she looked very happy.

“Your Majesty, how does Rashta look?”

Rashta stepped down from a small box and gracefully turned in front of Sovieshu.

The long dress slowly swayed to the rhythm of Rashta’s movement.

She looked as beautiful as a fairytale princess, which made the designer feel pleased.

Due to Rashta’s insistence, the designer ended up making the glamorous dress that Rashta wanted.

Contrary to her expectations, Rashta also looked good in this glamorous dress, which made her proud.

But as soon as Sovieshu saw Rashta’s dress, he said firmly, “It’s too glamorous.”

Rashta’s eyes widened and she asked, “But isn’t it beautiful, Your Majesty?”

“It is beautiful. But I would like it to be plainer.”

Sovieshu spoke as if he was replying to Rashta, but he was actually talking to the designer.

The designer bowed her head and replied, “I understand.”

Rashta gaze flitted between Sovieshu and the designer in surprise.

Then, when Rashta burst into tears, Sovieshu and the designer looked at her more surprised.

Rashta sobbed and complained to Sovieshu, “I want to wear this dress, Rashta wearing this dress will look very good by Your Majesty’s side!”

“You can wear a glamorous dress another time. Wear a plain dress this time. Won’t there be many parties to attend in the future?”

“It is important to wear this dress on the most special day.”

Rashta added with a sad expression, “Rashta wants to be worthy to stand by Your Majesty’s side.”

Sovieshu wanted to refuse, but he had heard that stressing a pregnant woman was not good for the baby in her womb.

Seeing her whole face flushed, Sovieshu finally sighed and agreed, “It’s alright. You can wear it.”

I finished reading the Western Kingdom clerk’s records for the past 20 years. Now it was time to read the administrative records of former queens.

“Your Majesty is always reading books,” Mastas grumbled, she was so active and did not to like this…

“It’s always been like this, even in the Eastern Empire.”

Mastas and Laura were talking enthusiastically about me, while Countess Jubel pretended not to be interested in the conversation, but was discreetly sympathetic.

The scene brought back memories of my days in the Eastern Empire, which made me smile along with them.

It was at that moment…

Rose, who had gone to get coffee, came in and said with a strange expression, “One of Christa’s ladies-in-waiting is here.”

“Yes, she brought a flower basket.”

Although it seemed absurd, I let her in anyway.

“My name is Imaru, Your Majesty.”

It was the first time I had seen this lady-in-waiting of Christa’s.

After greeting politely, she pushed the flower basket she was holding with both hands slightly forward and said, “Christa heard that Your Majesty has gotten personal knights, so she asked me to hand this to you as congratulations.”

When Rose stepped forward and received the flower basket, Christa’s lady-in-waiting added, “These flowers were grown by herself.”

“Please pass on my thanks.”

The flowers were vivid and beautiful, and the basket was also beautifully decorated.

But as soon as Christa’s lady-in-waiting left, Rose snorted, “She must be uneasy about Sir Langdel’s knights. She has ignored Your Majesty all this time, but now of all times she sends a gift.”

Countess Jubel also asked coldly, “Shall we throw it away?”

Rose looked at her in surprise, then smiled and added, “Just kidding,” pointing to the undecorated table.

“I’ll put it there, Your Majesty.”

After a moment of thought, I asked Rose, “Miss Rose, send a bouquet of acacia flowers to Christa in return.”

I would have liked to send her flowers from my garden, too, but I hadn’t grown any yet.

“It’s a gift she sent to look good. Do you have to send one in return? Anyway, I don’t think she was really happy to send this gift.”

Mastas seemed to dislike the idea, but…

“It doesn’t matter whether she sent it sincerely or not.”

“A false friendship is much better than being in conflict.”

Days passed, but Christa did not show any friendly action since then.

However, there were some changes.

Now my ladies-in-waiting got along very well with each other, and I got used to having knights standing guard at the door.

Nian would come with Viscount Langdel every two or three days to hang out, and it was great fun to see them together.

Perhaps it was because I now knew that Viscount Langdel was not an innocent young man with a crush, but the commander of the 5th division of the dreaded Supranational Knights.

Every time I saw him concentrating and reacting to both Nian’s words and actions I couldn’t help but laugh. Although I tried not to laugh because it might seem impolite.

But despite these peaceful days, I felt uncomfortable whenever I looked down at my desk drawer.

It was because Sovieshu’s letter was in that drawer.

If I could bring back the Sovieshu from my childhood, I would like to sit in front of him and ask, “…What are you really thinking about?’”

That Sovieshu was more honest in expressing his emotions than the one now.

As I was about to open Sovieshu’s letter to read it again, someone knocked at the window.

I looked back and saw Heinley at the window again!

I left the letter in the drawer, walked over to the window, and closed the curtains.

A voice of bewilderment sounded from behind the curtains, I wanted to see him like this at least once.

If I kept opening the window for him he wouldn’t stop coming this way.

“Queen? I’m sorry, Queen?” Heinley called me repeatedly as if he were really surprised.

I deliberately counted 30 seconds and pulled open the curtains.

Heinley was so dejected that he squatted down, resting his hands on the windowsill.

Once I opened the window, he looked me in the eye and apologized, “I’m sorry. It’s just that I’m used to seeing you this way…”

“I’ll just allow Queen to come in through the window,” he added, “So, may I come as Queen?”

“If you’re willing to dress.”

“…Will you dress me yourself?”

What did he expect? Sly Eagle.

“What brings you here at this hour?”

Evidently, it was still time to work.

“I have good news and bad news. I just wanted to give them to you.”

“The good news is… our wedding date has finally been set, Queen.”

“Before long, we will undeniably be a married couple.”

“We are already married and undeniably a married couple.”

“What we did was an oath before God. Now we will proclaim before the whole world that I am your husband and you are my wife.”

Looking at Heinley speaking with satisfaction, I felt like pinching his cheeks.

The way he spoke… confused me. I remembered how I mistook it for a love confession when he tried to tell me about the self-proclamation of empire.

But I acted calm, and asked him, “What’s the bad news?”

Is it worse than I thought?

Heinley hesitated a little and said, “The Emperor of the Eastern Empire sent an invitation to attend his wedding.”

“He hopes that we can attend. In case I can’t, he at least wants Queen to attend.”

After he finished speaking, Heinley looked me in the eye, “Are you going?”

He told me this was bad news, was it because Heinley didn’t want me to attend?

But I answered him right away without hesitation, “I’m going to go.”

“I want to see my parents and my friends.”

“I don’t want to miss the opportunity to see the people I love just because he’s there.”

As soon as I spoke, Heinley quickly said, “I’ll go with you.”

I immediately declined, “You don’t have to.”

It’s not because I was uncomfortable with him going with me but because last time we were temporarily detained at Troby Mansion on Sovieshu’s orders.

That must still be an unpleasant memory. I didn’t want to make him go there again.

But Heinley replied with a smile, “I want to go with you. My parents and my friends are there too.”

Heinley’s parents were in the Eastern Empire?

I guess he meant my parents.

When I opened my mouth in surprise, Heinley grumbled in a joking tone, “They seemed to feel very uncomfortable around me when we met. This time, I’ll make sure they accept me as their beloved son-in-law.”

Heinley had saved me from being completely disgraced.

He chuckled and moved his head closer.

Then he kissed me lightly on the cheek. 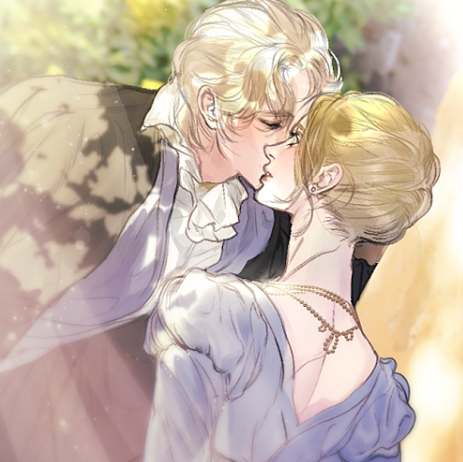 I was so surprised that my eyes widened in shock.

Then, he pulled his head back a little and looked me in the eyes, seeing that I remained motionless, he moved his head closer again and pressed his lips against my cheek.

This time, it was even longer.

He eventually pulled back and smiled shyly.

“When will you accept me as your beloved husband?”