Navier hugged his body with both arms, not moving a muscle.

Queen, who was motionless like a doll, looked up stealthily.

He could see Navier’s chin. Her nose was higher up, followed by her lush lashes.

Her eyes were closed.

Navier’s body swayed for a moment.

Queen’s eyes narrowed. He briefly examined Navier and gently pulled out one of his wings from her embrace.

Then he checked again that Navier was still asleep and made an effort to free the other wing.

Queen, after checking for the last time that Navier was still completely asleep, chirped happily with both wings freed.

Of course, he had to be careful not to make a sound.

‘Gu! Gu!’ Queen twittered inside and immediately wrapped Navier in his soft wings.

Despite having enveloped her with his wings, Navier would barely be able to feel the contact. However, she would be very cozy because of his feathers.

Queen stayed on Navier’s chest, also closing his own eyes.

He wanted to sleep next to her like this. If there was such a thing as happiness, being together like this would be—.

However, a sudden jolt caused Navier’s body to fall to the side.

Queen spread his wings out to try and protect her, but his wings were not large enough to cover Navier’s entire upper body.

I felt a sharp pain on the side of my head.

I opened my eyes in surprise to find myself collapsed on the floor of the carriage and crushing Queen.

Did he hurt his wing?

Panicking, I quickly got up and examined him.

Fortunately, he seemed fine. He even stretched out his two wings and lightly touched my head.

Actually, the side of my head hurt a lot, but I lied to hide my embarrassment.

Then, he began to look around inexplicably.

Heinley had become Queen, so naturally he couldn’t say anything.

Upon careful inspection, I noticed that the carriage was tilted.

Something must have happened.

When I opened the window, I heard Yunim’s voice coming from outside.

“Your Majesty Heinley, are you all right?”

But Heinley, who was supposed to answer, was currently in his bird form.

“His Majesty is well.”

When I eventually responded instead, Yunim was silent for a moment before speaking up again,

“Your Majesty Heinley, I think you should come take a look at this.”

As I listened carefully, I could also hear the sound of carriage wheels.

Then, Queen looked at me.

“Return to your human form.”

I whispered quickly, put his clothes aside and closed my eyes.

Soon after I heard a soft voice say, “Don’t worry.”

With my eyes closed, I smiled quietly and nodded.

My husband is a bird. Isn’t that cute?

Suddenly, the carriage jolted once again. Startled, I reflexively opened my eyes and tried to hold onto the sides.

However, almost at the same time, something large pressed me to the floor.

After waving my hands in bewilderment, I realized that Heinley had lost his balance while dressing and slipped.

It was Heinley’s body that was pressing down on me. My eyes widened in shock.

Heinley’s face was right in front of mine. He looked embarrassed and shocked as well.

Heinley stammered, his face was flushed and he tried to put his hands on the floor of the carriage. However, he ended up putting his hands on mine.

I turned my head to the side and whispered,

“It’s alright…You can get off of me.”

It was very embarrassing to know that his naked body was on top of me.

Fortunately, our faces were so close that I couldn’t see anything else. But that didn’t mean I wasn’t aware that he was naked.

Heinley mumbled and hurried to get up, avoiding my hands.

But this time he slipped on the skirt of my attire.

Our noses almost touched. We might have even gotten hurt, but Heinley reached out his hands to brace himself off the floor and avoid collision. 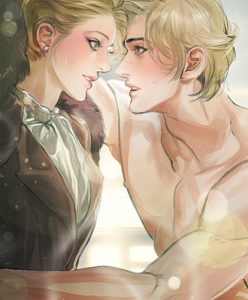 On the other side of the door, Yunim shouted again, “Your Majesty, are you all right?”

Heinley said adamantly to Yunim and tried to get up, but slipped again.

Our bodies became even more entangled.

Embarrassed, I tried to push him off. But it was his naked body that I touched.

I became more embarrassed, so I took my hands off his naked body and tried to pull away. Because the carriage was tilted and my skirt was spread out on the floor, if Heinley tried to stand up he would slip again.

But Heinley groaned as soon as I started to slide away, so I asked worriedly,

Did I hurt him? Did my jewels prick him?

Stunned, I looked down.

I would have preferred that Heinley did not separate from me. When Heinley lifted his body a little, I could immediately see why he had told me not to move.

I exclaimed in shock, and Heinley flinched. I hurriedly looked up, but again made eye contact with Heinley.

Then I turned my eyes away, overwhelmed. I couldn’t even ask for outside help in this situation. It wouldn’t be any good.

I could only think of one way.

After that, I lowered my hand and picked up the skirt that was spread across the floor of the carriage.

As soon as I finished, Heinley stood up leaning one hand off the floor and the other off the wall to avoid my attire.

I turned my head towards the wall. My face was burning and my ears were ringing.

If there was a hole here, I’d bury Heinley in it right now.

I heard him put on his clothes, but didn’t open my eyes.

Not long after, I heard the sound of the door opening. Only then did I open my eyes and look.

Heinley’s clothes were wrinkled, his neck and face were completely flushed.

Oh my god. I didn’t notice it before because I was too embarrassed, but there were lipstick marks on his neck.

Rose, who was gawking at him, turned her head towards me.

In a panic, I hurriedly closed the door.