I must definitely not be a good person. I know that many people wish their ex-spouse to be happy. However, I feel it would be very unfair if the two people who threw me out, lived happily ever after. So, the only thought in my head was, ‘I hope they’re not happy.’

“Let’s invite them,” Heinley whispered softly beside me.

Did he notice my thoughts?

“Let’s invite those two too.”

Will they attend just because we invite them? I don’t think so.

When his warm hand touched mine, my momentarily disturbed mind, returned to normal. His whisper and touch made me feel better.

As we intertwined our fingers, I was comforted to have a place to hold on to tightly.

But suddenly I felt a gaze on me and realized that Sovieshu was staring at us. 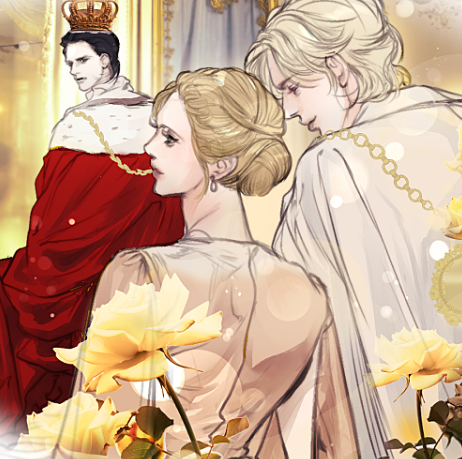 Does he feel that his ex-wife is ruining his wedding? Sovieshu’s expression was distorted.

Even Rashta, who was beaming beside him, noticed it and followed Sovieshu’s gaze. Looking at me, Rashta frowned slightly.

The next event after the wedding ceremony was the parade.

A wedding parade in which the Emperor and Empress would ride through the capital in the same carriage. Although completing the route in an ordinary carriage would not take long, in a parade carriage it would take three to four hours because it moved at a slower pace.

At this point, a small problem arose.

They were supposed to get on the parade carriage right after the wedding ceremony.

Rashta, who made her way to the carriage with the help of Viscountess Verdi, was stopped by Sovieshu.

“Change your clothes,” he told her.

Traditionally, the bride and groom would parade in their wedding attire to show their people how they looked as they sealed their wedding vows. Other nobles would also gather around to watch.

But when Sovieshu suddenly asked her to change her clothes, not only was Rashta surprised, so were the other nobles.

After reflection, the nobles quickly agreed with Sovieshu’s words. If she appeared dressed like that in front of the people, it could be a disaster.

Rashta grumbled with a sad expression, she seemed to really like her glamorous dress.

“Rashta was told to go to the parade like this.”

Sovieshu tried to appear more determined, but eventually sighed and ordered her.

“At least take off those accessories. They look ridiculous.”

At Sovieshu’s harsh words, Rashta was forced into a nearby empty room next to Viscountess Verdi.

After a while, Rashta came out. Having removed all the accessories, she really looked as beautiful as an angel.

Although the dress was still extremely glamorous, Rashta stood out above it.

However, she got on the carriage with a sad expression, seeming to prefer her previous look.

Only then Sovieshu got on the carriage and moved his head ever so slightly as if to look in our way. In the end, he didn’t and simply instructed, “Let’s go.”

At the back of the departing carriage, white silk ribbons with gold edges fluttered beautifully.

As I watched this scene, I got into the next carriage with Heinley.

Feeling a little nervous, I grabbed onto the carriage railing with one hand and grabbed Heinley’s hand with the other.

The parade carriage had no cover, so I had to stand the whole way.

In other words, I would have to face the stares of the people of the Eastern Empire I left behind.

I couldn’t help but be tense. Now was no time to pay attention to Rashta’s dress.

The Western Kingdom was also a powerful country, so we would be right behind the Empress and Emperor’s carriage…

It was the perfect position for the people to see Rashta and me alternately.

I took several deep breaths to appear as indifferent as possible, and gripped the carriage railing tightly as the carriage began to sway.

I heard a loud cheer as we began to move through the streets.

It was the people of the Eastern Empire cheering for Rashta.

I had heard that Rashta was incredibly popular among the commoners. It was clearly noticeable as we passed through the streets.

The people’s cheering for Rashta was louder than it had been at Sovieshu’s parade with me in the past.

The atmosphere among the nobles and commoners was completely opposite.

Probably relieved by the fervent cheering, Rashta was smiling broadly and waving to everyone.

Her bright and charming appearance made people even more excited.

However, the cheering turned to near deathly silence as I passed them next to Heinley.

I had heard that about half of the people were not opposed to my marriage. Apparently, even those people did not expect me to personally attend Sovieshu’s wedding.

Wherever I passed, it became amazingly quiet.

I was trying to hide my embarrassment by keeping my chin up as I made an effort to remain composed.

Heinley gripped my hand even tighter.