She reached out and examined a feather. The blue was very beautiful.

‘But why is this here?’ Delise glanced at Rashta.

Rashta had a blank stare, still sad and with her arms folded.

Did she put this here out of some kind of superstition?

Delise, who was pondering what this was about, suddenly remembered the events of a few months ago.

Emperor Sovieshu had given Empress Navier a blue bird, and she refused it.

That bird certainly had these same blue feathers. Moreover, at that time it did not have as many as it should have. When she asked why, Rashta replied that the empress had plucked them.

‘It was Rashta who plucked the bird’s feathers, not Navier?’

It was originally quiet, but now it had become even quieter… Delise felt an inexplicable shiver run down her spine, and slowly turned her head.

Rashta was leaning back in the armchair, staring at her. When their eyes met, Delise froze as her heart pounded.

‘Did I see something I shouldn’t have seen?’

Despite that, Delise believed in Rashta’s character, which her brother claimed, and tried to speak calmly.

But even before she could finish speaking, Rashta shouted thunderously.

Delise was startled and tried to move closer to Rashta, but when Rashta shouted, “How could you do this!” She reflexively backed away.

Delise was startled and tried to approach Rashta, but instinctively stepped back when she shouted, “How could you do this?!”

“How dare you pluck His Majesty’s feathers?”

Delise was so surprised that she didn’t even notice that Rashta misspoke.

“Oh, no, I didn’t do it, I was changing the pillowcase, when this—”

As Rashta screamed again, the door opened and several people came in.

“”Your Majesty the Empress?””

“”Your Majesty the Empress!””

It was the other maids; Arian, Viscountess Verdi, and her guards. Rashta without even turning to look at them, covered her mouth with one hand and shouted at Delise,

“I can’t believe you plucked the feathers off a live bird, how could you do this?!”

Delise, horrified, hastily knelt down in front of Rashta,

“Certainly not, Your Majesty! I, I thought that was the work of the former empress—”

Rashta slapped her on the cheek, shutting Delise’s mouth. There was a loud sound and Delise’s head snapped to the side.

“How dare you pluck His Majesty’s feathers?! Also, you put them inside Rashta’s pillow. It’s clearly an attempt to harm Rashta!”

But as Rashta screamed repeatedly, Delise only stuttered without a sound of pain,

Even so, Rashta still had a cold attitude, so Delise hurriedly pleaded with Viscountess Verdi.

But Viscountess Verdi, who was unaware of the reasons, quickly stepped back to avoid being involved.

Then, Delise clung to the guard with whom she was on good terms.

“I did absolutely nothing, please stop Lady Rashta!”

But even the guard, who had always greeted Delise with a blush on his cheeks whenever he saw her, coolly brushed her hands away and stepped back.

It was an attitude as if trash itself had touched him.

Although no one knew exactly what was going on, they assumed it was something bad.

Delise was deeply hurt, but she suddenly begged Rashta.

“No! Rashta can’t have a creepy girl like you as a maid.”

When Rashta ordered the guards, “Take her away!” The guards quickly reached out and roughly grabbed Delise by both arms.

Although she was being treated roughly, the young guard was indifferent toward the beautiful Delise.

Delise struggled, but in the end she couldn’t overcome the difference in strength and was dragged down the corridor.

“This gave me goosebumps!”

Rashta cried out, her face deathly pale. From her expression she looked truly horrified.

When everyone finally surveyed the room, they noticed a removed pillowcase, with blue feathers scattered around it.

“What is that, Your Majesty?”

“It was Delise who plucked the feathers from His Majesty’s bird and put them inside Rashta’s pillow. Fortunately, I caught her.”

Rashta looked trembling in another direction and ordered,

Arian, another maid, gathered the feathers around the pillowcase with a heavy face.

“Get rid of the pillow too.”

Once Arian came out, Viscountess Verdi said, “I’ll bring you hot tea” before quickly following her.

Rashta slumped on the armchair after everyone left. In fact, she was really scared. She was rubbing her arms as she suppressed her fear.

Back then, she didn’t know what to do with the feathers, so she had hidden them first. Then, so much happened that she forgot about it. 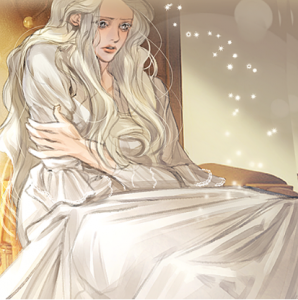 Rashta frowned, berating herself and spitting curses in her mind.

“Was that too much? Should I have pretended not to know?”

Once she calmed down a little, she felt strange remembering how Delise had been dragged away for no reason.

However, she couldn’t change her mind now.

“The empress has enormous power… I can’t believe I can get rid of a person with a single word.”

After dealing with Delise, Viscountess Verdi, who had been a nuisance earlier, re-entered her vision.

‘She’s definitely smart. I don’t like her, but that doesn’t mean she has any way of catching me.’

However, Rashta decided to postpone the elimination of Viscountess Verdi.

Delise could have accused her as soon as the situation arose, but Viscountess Verdi could not. Besides, despite everything she was still of the nobility, and seemed to be on good terms with some nobles.

More importantly… Now that this happened, she recalled the attitude of the noblewomen who attended her first tea party as empress.

What would happen if after bringing those noblewomen as my ladies-in-waiting, rather, they tried to find a weak point to take advantage of it?

She preferred to stay only with Viscountess Verdi.

At Rashta’s indifferent words, Viscountess Verdi was relieved and walked out saying, “alright.”

Rashta closed her eyes, and sipped the hot tea.

As the hot tea entered her body, the circulating heat gradually lessened her tension. In any case, the blue feathers were now a thing of the past.

‘I think I can relax now. I was planning on getting rid of her at some point anyway.’

But before she could relax, a horrible thought suddenly came to mind.

‘What if Delise holds a grudge and spreads bad rumors about me?’

People were prone to believe false rumors. Rashta had taken advantage of this to bring down Duchess Tuania, and now she was frightened to think that the target might be her.

Delise seemed sincere and charming, wouldn’t it be easy for her to spread false rumors?

She was currently being looked down upon by the nobles. Clearly it would not be good in the long run for the commoners, who were on her side, to be swayed by strange rumors.

‘I’ll have to shut her mouth forever.’

“Come to think of it, that’s too serious a crime. Mistreating His Majesty’s bird is to harm the Empress, isn’t it?”

Viscountess Verdi swallowed hard, she had a bad feeling.

“She has done a horrible thing, so she must be punished accordingly. Have her tongue cut out and imprison her.”