In fact, it was just a bedroom.

The only furniture inside was a bed with a fluffy rug underneath it.

The bed in this bedroom was even larger than the bed in the Empress’ Room and the Emperor’s Room, which in themselves were very large.

Was it really a place just for sleeping?

However, it didn’t feel empty because there were bunches of baby’s breath flowers around.

There was also a subtle glow coming from the bed. What function did it have?

As I looked around, I heard ‘My Queen’ from behind me.

To my surprise I saw Heinley standing against the wall next to the door that connected my room to the bedroom.

As expected, he was wearing the same robe as I was, but…

Feeling embarrassed, I hastily turned around.

I could see most of his chest because the belt of his robe was tied loosely.

As I tried to avoid eye contact out of awkwardness, Heinley came over and gently wrapped his arms around my waist from behind.

I felt so embarrassed and awkward, I was on the verge of tears.

Also, heat rose from the areas where his lips passed. And probably because he had just bathed, his lips were moist.

At my careful words, Heinley chuckled softly, and went to the bed with his eyes on me.

Then he sat down on the bed, stretching out his arms with his legs slightly spread.

He had asked me to take the lead, but did he really want me to?

However, I slowly approached feeling a little calmer. In an instant, I was standing between Heinley’s legs.

But it seemed that this was as far as he would go in his bold behavior..

He looked at me with an unknown expression, and I swallowed hard, staring into his mysterious pupils.

His still damp hair made him look more attractive than usual.

I reached out my hand slowly, and ran it through his hair. Heinley then closed his eyes and raised his head slightly, he seemed to say ‘I’m in your hands’.

… So cute. He’s like a big puppy. A very gentle puppy.

His attitude gave me a little courage.

I slipped my fingers through his hair to stroke it, as it gently tangled around my hands.

After doing this some more, I lightly kissed his forehead and whispered.

Heinley opened his eyes and smiled, obediently climbing onto the bed.

Although I hesitated, I pushed his chest slightly so that he completely laid his upper body down.

Once my fingertips touched his naked body, Heinley flinched for a moment, but lay back on the bed without protest.

In this position, he stared at me and whispered with eyes full of expectation.

“Naughty eagle. You don’t mind if I’m rough… or do you want me to be?”

When I asked with a smile, Heinley mumbled, “As you wish is fine,” then reached down with one hand to grab the belt of his robe to untie it completely.

Once he untied his belt, his upper body was fully exposed.

Dropping my slippers to the floor, I climbed onto the bed on my knees and slid onto his abdomen, straddling him.

Heinley let out a suffering sigh, as if he couldn’t take it anymore, and put his hands on my thighs.

Although his hands were touching my robe, I felt as if they were directly touching my skin.

As the heat quickly rose in my face and I bit my lower lip, Heinley’s hands slowly ran up the sides of my body, stopping near the upper tailbone.

“Wife, how do you see me from above?”

“You only make it naughtier.”

His whispers tickled my eardrums. I slowly stretched my hands out and roamed his upper body. Heinley moaned, as I caressed his skin with my hands, from his chest to his neck.

But still, he continued to move his hands slowly in a bold manner…

At this point, I grabbed his hands, and pressed them firmly to the bed near the side of his face. 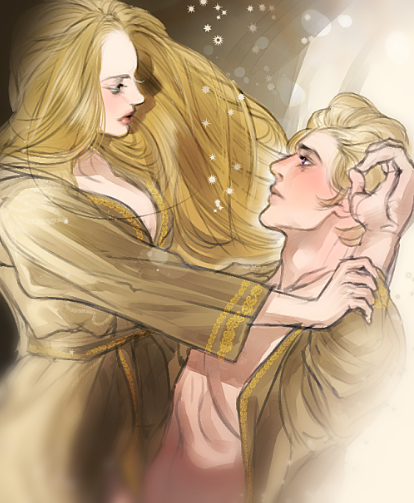 “Didn’t you ask me to take the lead today?”

I kissed a surprised Heinley a few times on the cheeks, before slowly placing my lips on his.

Wanting to fully enjoy the moment, I lowered my hands and slowly removed his pants.

…This part was already completely prepared.

When I burst out laughing at how cute he was, Heinley blushed up to his ears, grabbed the belt of my robe and tugged lightly on it.

“It’s embarrassing, please do it while kissing me.”

Sovieshu returned to where he was staying as soon as Navier left the banquet hall.

After spending some time sitting on the bed in a daze, he went to the window and leaned his head against the window frame.

He felt dizzy and broken. Even right now he felt nauseous, and as if his heart was about to shatter into pieces.

The image of Navier smiling as she held the hand of that damned king appeared before his eyes.

He clenched his fist.

‘Will she now be in the room where the wedding night will happen?’

When that thought came to his mind, he turned white as a sheet.

He hated to see Navier smiling next to Heinley, rather than that the Western Kingdom had become an empire.

He hated to see them dancing together, and he hated the fact that that damn kid kept sticking to Navier as if they were really close.

Sovieshu clutched his chest and bent over from the pain in his heart. It was very painful.

The pain was strong enough to suppress his anger.

His wife, who had smiled next to him, now stood next to another man.

This fact alone made the blood in his head boil. He felt as if the blood was going to leak right out of his eyes.

In the end the blood did not come out of his eyes, but from his nose.

Sovieshu took out a handkerchief and wiped his nose as the blood dripped.

Suddenly, he wondered if she had felt the same way when he brought Rashta.

‘If she was angry, because she didn’t show it, did she suppress her feelings?’

Sovieshu muttered at once, grinding his teeth.

‘If so, I would have noticed it at some point, but Navier didn’t seem to be affected. She had no interest in me. That’s why she acted so indifferently.’

However, he thought it was just as well. Because if Navier had experienced these same feelings, it would have been awful.

Sovieshu sat down on the floor with his back to the window. He leaned his head against the wall and lowered his handkerchief.

He could see the Navier of the coronation day in front of him.

The Navier of that day held out her hand to Sovieshu.

“We must go quickly, Your Majesty.”

Frowning, she continued in a reproachful tone,

“What are you saying?”

She pretended to look at him sternly, and then reached out her hand again.

This was not what he remembered from that day.

He had prepared from the beginning for the coronation ceremony with great dignity and did not complain that he could not stand up.

‘So who was the Navier in front of me? What the hell was this?’

When he thought about it, he recalled that this happened shortly before the coronation day. ‘That was probably the first time I got drunk. Did that matter now?’

Sovieshu tried to reach for his wife’s hand. However, the moment their hands overlapped, Navier’s illusion vanished.

He was about to get up when he fell on his back again, hitting his head against the window frame.

However, he cared more about the illusion that vanished before his eyes than the pain of the blow.

Sovieshu shouted her name in bewilderment and waved his hands in the air.

“Navier? Where did you go?”

He muttered and managed to get up. He was reeling from the terrible effects of the alcohol.

Scared, Sovieshu rushed to open the door and came out shouting.

“Your Majesty, you are drunk!”

Marquis Karl quickly carried Sovieshu back to his room while supporting him.

“Bring me some sobering medicine.”

He immediately instructed one of the guards, then helped Sovieshu lie down on the bed.

Rashta, who had come to get Sovieshu to sing a lullaby, stood in the corridor, stunned, before hastily turning around and running away.