Rashta hurried back to her room.

Her heart was beating uncontrollably.

‘What does this mean? What did I just see?’

Her mind was in chaos.

As much as she tried to deny it, Sovieshu’s attitude under the influence of alcohol made it all too obvious.

As soon as she recognized this fact, a deep fear washed over her.

Sovieshu had been her benefactor and savior, the one who lifted her from the bottom, but he was also the person who knew her weaknesses.

If he let her go she would plummet again with nothing she could do to stop it.

There was also no bloodline to hold on to since the baby had not yet been born.

‘Calm down. The deposed empress has already remarried. It’s useless for him to regret it now.’

Rashta scratched her skin while biting her nails.

Her belly started to hurt again, probably as a result of all the stress.

‘But even if he didn’t bring back the deposed empress, what if this caused him to turn cold to Rashta? What if he blamed Rashta for the divorce and walked away?’

Then he would bring another woman. Sovieshu was an emperor, young, and extremely handsome. Many women would take his hand if he wanted it. Either by choice, or for the sake of their families.

‘No way, absolutely not.’

Rashta quickly got into bed and curled up.

She wished to hear from Duke Elgy that everything would be fine. She wished he would comfort her with his exceptional mind.

However, there was no way Duke Elgy, who had not even come to the Western Empire, would appear out of nowhere.

Rashta opened her tightly closed eyes and removed her fingers from her mouth.

A firm determination emerged in her uneasy eyes.

That’s right, there is no time to act like this.

If she had stayed crying inconsolably and fallen into despair the day she lost her first baby she would never have gotten this life.

Rashta had run from that place of her own free will to cling to a new life.

The same was true now.

If she remained as is, trembling with trepidation, the end would be obvious.

‘I must protect what is mine.’

When she was a concubine the emperor’s love was everything. All her power came from the emperor. However, now at least she had her own power.

Even as the Emperor he could not divorce again for a while because of public opinion. He had to hold out for at least a few months.

By then the baby will have been born and will be the Emperor’s firstborn no matter what anyone else said.

‘In the future the baby will protect Rashta. But until then, Rashta has to protect the baby.’

Rashta got up from the bed and paced the room.

The deposed empress betrayed the emperor, and although she currently held the position of empress, she was the empress of a country that had just proclaimed itself an empire only yesterday.

Viscount Langdel is a wicked ruffian who tried to stab a weak and unarmed girl. And isn’t Duchess Tuania also a frivolous woman who uses her feminen wiles to drag men behind her?

‘There is no need to be pressured by such people. Why should Rashta be discouraged when the perpetrators hold their heads so high?’

Isn’t Viscount Langdel the leader of a knightly order? If that’s the case, that’s great. I’ll expose how disgusting he is in front of everyone.

As soon as I woke up I felt a lightness. As I felt around with my hands I heard a chuckle and opened my eyes.

Looking up, I saw Heinley staring at me and chuckling.

“Wife, did you sleep well?” 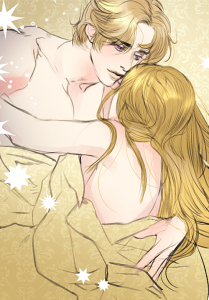 I buried my face in his chest from the flood of memories that arose in my mind.

Although I think I fell asleep around dawn, I didn’t remember the details well.

But when I woke up I was laying in Heinley’s arms. I didn’t feel my body sticky either, ah….

When I asked awkwardly, Heinley lightly bit my earlobe.

“You asked me to prepare the bathtub with rose scented bath bombs, lots of bubbles and wash your hair with fruit shampoo.”

Heinley smiled and rubbed his cheek against mine.

Feeling embarrassed, I hugged him tightly and hid my face.

After he mentioned the rose scent and the fruit shampoo, I could tell Heinley wasn’t lying because those used to be my tastes.

Then, I suddenly realized that Heinley’s hair smelled like my favorite scent also…

He washed it with the same stuff.

As soon as I noticed it, my face got even warmer.

Isn’t Heinley embarrassed now? Although he wasn’t being shy at all, his ears were still red.

Meanwhile, Heinley, who kept nibbling my ears, started traveling down my neck.

Then he kissed my collarbone lightly.

… I was confused by his current behavior.

We were friends, but we were only bound together by a marriage of convenience…

However, he acted like he was dying for me.

After calling my name, Heinley slowly and naturally began to move his lips further down my collarbone.

He had said that he was a fast learner. And they weren’t empty words. His soft lips running light kisses down my skin were wonderful.

I had to prepare for the next reception. I couldn’t stay in bed for much longer.

As I pushed his forehead Heinley rubbed his face against the palm of my hand and kissed my wrist.

“Heinley. We cannot, not now.”

After insisting again Heinley finally moved aside with a regretful expression.

Why doesn’t he look tired… despite trying so hard yesterday?

Did he have such good physical stamina?

I glanced at his profile. His face that had made me exclaim in admiration when we first met, looked even more handsome now that he was laying down.

When I reached out to touch his lips and the tip of his nose, Heinley smiled again, kissing my wrist and then palm.

After caressing his cheeks a few times, I unconsciously uttered a few words from the bottom of my heart.

“I hope this time I can have a baby.”