As I walked quickly through the corridors, I saw all kinds of carriages driving away along the white road.

The distinguished guests who came to the wedding were leaving one by one.

My parents would come once everyone left. They didn’t want to interact with Rashta or Sovieshu.

After watching the carriages drive away, I kept walking quickly.

I wanted to go to a quiet place to calm my troubled mind. What has been going on since yesterday?!

However, as I passed near the detached palace, I saw familiar black hair.

I stopped abruptly as if a hand had come out of the ground and grabbed my ankle.

He was standing near the detached palace where I had stayed for a long time. Did he think I was still staying there? Or…?

At that moment, Sovieshu turned his head towards me. When our eyes met, he immediately approached me.

He was wearing a more comfortable suit compared to the ones he wore at the wedding.

Well…Rashta was pregnant, so they would hardly stay for much longer.

He didn’t smell of alcohol. It seemed that he hadn’t had any liquor today.

I addressed Sovieshu as if he were any other emperor of a foreign country.

“Your Majesty, are you leaving today?”

Instead of answering, Sovieshu’s expression twisted.

From his gaze, he seemed to have a lot to say, but he remained quiet. In my case, I had nothing to say, so I didn’t speak either.

After staying like this for a while, I said finally,

“There is nothing to say, so I will leave.”

In the past I always tried to smile when I was beside Sovieshu in front of the gaze of others. The emperor and empress should look good together.

It was the same when Sovieshu brought Rashta. Some might say that I had no pride, but I still smiled beside Sovieshu.

Likewise, now she could not be quiet in front of Sovieshu because others might misunderstand the situation.

Although I would not reject the emperor of a powerful empire for no reason, I also did not want to create a sad and unpleasant atmosphere with my ex-husband.

However, Sovieshu called out to me in a low voice.

He was probably going to say something, otherwise he wouldn’t have called me.

I stopped and stared at him with an expressionless face.

‘..Well alright, if he had something to say, go ahead…’

Fortunately, one of my strengths was to show a cool, calm, and indifferent expression.

After a long hesitation, Sovieshu ended up asking a question.

What was his intention in saying this? Was he trying to say that he divorced me by mistake?

I don’t think that’s what he means. I hope not. Wouldn’t it be cruel if he almost ruined my life by mistake?

“My mistake was arrogantly planning everything on my own. I should have told you. I’m sorry I didn’t do that.”

Moving a little closer to me, Sovieshu asked,

His eyes, which were drier than usual, looked like rough gemstones.

But what was I supposed to say?!

“Although our relationship as a couple is completely broken, you are still the emperor of my home country. So take good care of the Eastern Empire, as you have always done.”

I spoke in as calm a voice as possible.

Sovieshu smiled helplessly, as if he expected this answer.

I had no advice to give to Sovieshu. Unlike Rashta, we had learned everything together. Of course, he knew as much as I did. He just had to think clearly.

However, I could tell by his next words that he was beside himself.

I looked at him in surprise, he seemed to have received a severe blow to the head.

A rough voice came out of me on its own.

I couldn’t help it.

Did he love me now?!

I could understand if he wanted me to come back because he needed my help. It must have been exhausting to do all the work we used to share.

But he said he loved me? To me? And right after celebrating my wedding?

Instead of saying something else, Sovieshu repeated it,

I looked at him unable to even breathe before finally asking angrily,

“What’s the point of saying it now? Did you think that would make me come back to your side?!”

“So that you would laugh at me.”

“I wanted to let you know that your ex-husband is an idiot who arrogantly left you and then instantly regretted it. That he is suffering from realizing his true feelings too late. So the divorce…. more than something hurtful, would become something you could laugh at.” 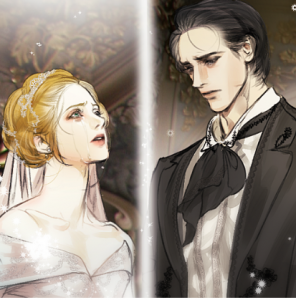 For some reason, I felt a slight heat in my eyes, and something flowed along my cheeks.

Staring at him, I began to remember every moment lived in the Eastern Empire.

The times he doubted me, the pains he caused me by siding with Rashta, the day he left me alone in front of everyone to go after Rashta, the expulsion of my brother, and finally the day he asked me for a divorce.

The memories went further and further back in time, the day Rashta arrived, the dinner we had together before he brought her, the time he smiled saying that the best empress was his wife, the coronation day, our wedding, and even the day we got engaged…

I didn’t want to cry, but the tears kept streaming from my eyes.

I wanted to hit him with a pillow like in the old days. I wanted to ask him why he abandoned me.

We weren’t deeply in love, but we were definitely friends. No, I actually liked him.

How could he do this to me? Were we not supposed to be together the rest of our lives?

Even though it was late, I wanted to scream and cry.

He was my husband, and I was his wife. How could he do this to me?

I knew my face looked terrible, but this time it was impossible to manage my expression. I hadn’t even brought a handkerchief.

Eventually, as I stood there with tears spilling down my cheeks, Sovieshu raised a hand.

But instead of wiping away my tears, he clenched his fist.

“When you think of us, remember this moment. Suffer no more for the hurt I have caused you. Just laugh at your miserable ex-husband who now seeks to cling to you.”