As I slept, a delicious scent suddenly arose.

The desire to not want to get up collided with the desire to smell that delicious scent more.

I shook my head from side to side with my eyes closed, but eventually woke up to hear an awkward laugh nearby.

As soon as I opened my eyes, I saw Heinley standing next to a food cart.

When I asked, while sitting on the bed, Heinley removed the silver lid on the trolley. There was an omelet and dark coffee.

That’s not what I meant… How come the trolley is here…? Did he bring it when he got up?

Looking at him in surprise, Heinley took a piece of the omelet with his fork. 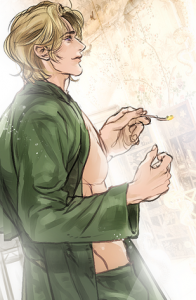 After I opened my mouth and ate it, he asked with a proud smile.

“How does it taste?”

Many nobles didn’t know how to cook, much less the imperial family. He was a really wonderful man. And such a man confessed that he loved me.

As she pondered, Heinley again poked at another piece of the omelet.

“Is there anything else you’d like to eat, My Queen?”

Heinley continued to feed me excitedly, as I opened my mouth awkwardly.

After doing it several more times, I couldn’t bear it and had to ask.

Is… Is this a habit of your tribe?

“Birds usually feed each other. Were you fed…?”

Heinley frowned as if he had never thought about what I said.

Then he stared at me for a moment and crossed his arms with a serious expression.

Did I make a mistake? Did he feel bad because I treated him like a bird?

“I’m not sure, My Queen. But now that you mention it, I think so too.”

“Although my father was very strict, curiously, he always made sure to feed me.”

“I was never very close to my brother, but strangely he also fed me.”

“Come to think of it, I have had this in mind from the moment I fell in love with My Queen, ‘I must be the one to feed her.'”

So if we have a child, would Heinley feed it? That would be lovely…

At that moment, a strange idea arose in my mind.

“Heinley, there is something that makes me very curious, no, it is important.”

“Maybe those of your tribe…”

“Are they born as eggs?”

Sovieshu called Marquis Karl to give him secret instructions.

“Rashta’s slave trade certificate could be inside the imperial palace. Find it and bring it to me.”

“Is that true, Your Majesty?”

“I’m not sure. That’s what Koshar told Rashta.”

It was possible that Koshar had intentionally lied because of his hatred of Rashta.

However, two facts were undoubtedly true. That Koshar had taken the bear corporation’s slave trade certificate, and that the certificate was currently missing.

“You must search carefully, otherwise this could become known.”

If the slave trade certificate came out before Rashta’s baby was born… No, it would be a big problem if it came out even after it was born.

He had to find it at all costs.

Meanwhile, Rashta was already looking for the certificate on her own.

Sovieshu had many close aides who acted for him with their mouths shut, but Rashta had none.

Duke Elgy was a friend, but not a subordinate.

So she had to find the certificate without anyone’s help.

“Greetings to Your Majesty the Empress.”

However, everyone recognized her as the Empress, so it was awkward to move around secretly.

Unless Rashta greeted first, there would not be a long conversation, but her actions were limited because she was under the gaze of others.

“It is over there? Or is it in that corner over there? I think there’s a hole on that side too…”

Rashta stomped on the floor, unable to quietly bend down to look in any corner due to her status as Empress.

She thought it would be easy to be Empress. But in this case it was a nuisance.

‘I need close aides or subordinates as soon as possible.’

As an empress, she was supposed to be able to handle people with her fingertips.

Rashta grumbled as she desperately searched around. However as she walked down the path that led to the main palace, she suddenly saw a magnificent carriage.

Rashta eyed the carriage suspiciously, as it was unusual for one to go that far.

Probably sensing her gaze, the coachman stopped the carriage.

Then, he got down from his seat and greeted Rashta.

“It is an honor to see Your Majesty Rashta.”

Rashta nodded in greeting, then jerked her chin toward the carriage and asked.

“Who is in that carriage?”

But the coachman’s reaction was strange.

He did not answer the question. He just looked around the place as if it was hard for him to answer.

When Rashta asked with a frown, the coachman stared at Rashta and said,

Rashta frowned. She had no idea who this Evely was.

After becoming Empress, Rashta discovered that there were just too many nobles in this world.

‘How could I know who she was just by the name ‘Evely’?’

“Who is Miss Evely?”

Rashta asked directly this time, but the coachman didn’t answer, even more hesitant.

The coachman had greeted her aloud saying, ‘Your Majesty Rashta’, so the person in the carriage must have heard. However, that person did not have the courtesy to come out to pay due respect to the Empress.

Rashta angrily ordered in the direction of the carriage.

“I don’t know who you are, but you have no manners. Come out and pay your respects right now!”

The carriage door slammed open and yellow shoes appeared. From the carriage came a girl Rashta had never seen before.

A girl who looked the same age as Rivetti.

Rashta was startled when she was about to shout at the girl.

Although Rashta was sure she didn’t know her, the girl was staring at her as if she were an enemy.

The cold stare made Rashta flinch. However, she soon became even angrier.

‘Is she staring at me like this even though she knows I’m the empress?’

It was truly disrespectful!

“Who do you think you are to look at Rashta like that?”

The coachman was embarrassed, so he hurriedly approached the girl named ‘Evely’ and said,

“Miss Evely, this is Her Majesty the Empress. Hurry up and pay your respects.”

The coachman looked scared, but he was more scared of Rashta.

Finally, the girl reluctantly opened her mouth. However, the words that came out were neither greeting nor apology.

Neither Rashta nor the coachman expected it.

“You are not the Empress I know.”

Her eyes were full of dissatisfaction, her voice muffled, and her words bold. Those three things stoked Rashta’s anger.

Rashta could no longer contain her anger and stepped forward.

Just at that moment, Baron Lant, who came running from the main palace, said,

“Your Majesty, she is a guest of the Emperor!”