After the official welcome…

“If Your Majesty does not mind, we would like to speak for a moment alone, without Navier. It’s nothing urgent, but…”

His expression became rigid, as if he thought Heinley would refuse.

But Heinley agreed without hesitation.

Still, the Duke and Duchess Troby were not relieved.

What they wanted to say to Heinley was a request from ordinary parents, ‘Please take good care of our daughter.’

However, they were not sure if it would be appropriate to speak as if he were an ordinary son-in-law, since this was the Emperor of the Western Empire.

Nevertheless, they were too worried about Navier to say nothing.

They were just as worried about Koshar, but the Koshar issue was not something to ask Heinley about.

Koshar depended on himself. However, a marriage was different. No matter how well one spouse did, if the other was a disaster, the marriage would turn into a nightmare or break up.

Although they did not migrate to the Western Empire with their children because of their strong loyalty to the Eastern Empire and the Imperial Family, the couple loved Navier and Koshar dearly.

So despite his embarrassment, Duke Troby spoke up. But contrary to expectations, Heinley laughed at the Duke’s sincere request.

“It seems obvious, but it often isn’t…”

“I love my wife. To be precise, it is an unrequited love.”

“You don’t need to worry about it, you can rest easy.”

Heinley said these last words with a very serious expression, holding back the next words that almost came out of his mouth, ‘I’ve said it many times, why do they still not believe in me?’

Perhaps because their first son-in-law was a mess and they were immediately pushed towards their second son-in-law, so the only way to dispel that mistrust was with actions.

Instead of making promises about the future, Heinley took the opportunity to ask.

“I also have something to say to both of you.”

But that question was only the beginning. A lot of questions arose next.

“Please tell me about my wife’s childhood.”

“What is it that my wife hates? Ah, it’s not to tease her, that’s to be avoided.”

“Do you have any childhood portraits of my wife?”

“Has my wife ever told you about me?”

The Duke and Duchess Troby each answered truthfully. This was better than showing no interest at all.

“… Navier had a big dog. She was very fond of it because they had the same birthday.”

When Heinley asked, “What did the dog look like?” They were quiet for a moment.

Light golden fur, large, and very handsome… what they were about to say sounded as if they were describing the emperor in front of them.

They both thought the same.

“Why did you two suddenly stop talking…?”

Looking at their son-in-law, the Emperor of the Western Empire, ask with a smile, Duke and Duchess Troby couldn’t help but laugh.

My father burst into tears again while my mother tried to calm him down as usual. However, she also seemed overwhelmed with emotions, although she didn’t say anything and just cut the steak with the knife repeatedly.

Instead, Heinley had a strange expression to the point that I couldn’t even recognize it.

Still, it made me happy to see them both.

And later in the shared bedroom…

“What did you talk about with my parents?”

“That’s a secret even for My Queen.”

“Even a conversation with my parents is a secret despite the fact that we are married?”

“There is also loyalty between me and your parents.”

“I haven’t done anything wrong, My Queen. Don’t look at me like that.”

“I know. It just seems like you suddenly became closer.”

I was curious what they talked about without me, because Heinley and my parents seemed to have gotten closer.

Although not enough to talk and laugh openly with each other, my parents seemed more at ease with Heinley than the two times he was in the Eastern Empire.

“Don’t you like me getting close to your parents, My Queen?”

Heinley chuckled. Then he patted the side of his bed and groaned,

“Wife, how long will you keep reading?”

It was a very dark night, the faint sound of rain could be heard outside the window.

Originally, I planned to check the records of the imperial palace officials until dawn, so I told Heinley to go to bed first.

However, Heinley insisted that I stay by his side, so I had no choice but to read a book in the mana stone bed.

“Until I get sleepy.”

When I answered honestly, he let out a sigh and slid his body stealthily over the bed until he was close to me.

Then, he gently laid his head on my lap and kissed my calf naturally. 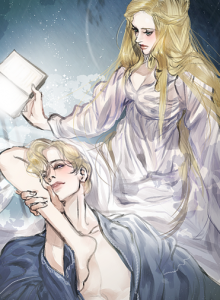 He pushed back his own hair slightly so it wouldn’t be in the way, and smiled sensually as he untied his robe.

“Wife, I’ll forget everything I’ve learned. I need to review and apply it. Will you leave me alone in this?”

Looking down, he grabbed my wrist with the loose robe, fully open, and kissed my skin repeatedly.

At the same time, he stared at me as if asking, ‘Won’t you do anything?’

Once I sighed, knowing he wouldn’t stay still, the corners of his mouth turned up slightly in a triumphant smile, then naturally he took the book in my hand and put it aside.

In the blink of an eye, he was looking down on me from above.

There was no time to be surprised, Heinley reached out his hand and ran it through my hair, kissing me on my forehead, on my eyelids, and on my ear as he whispered.

“Please check if I have learned properly.”

When I returned to my room after breakfast with Heinley, Laura had already prepared my bath and was waiting to help me.

“Today you don’t need to help me bathe. You can go back to your room to rest.”

“Ah, then I’ll wait here and help you get dressed!”

Laura said with a broad smile, but I told her that Countess Jubel would help me dress later.

Laura left in annoyance, but I had no choice.

I had marks all over my body…

After pacing the room awkwardly, I hurried into the bathroom and took off my robe.

Seeing my body reflected in the mirror I felt embarrassed.

Is kissing one’s whole body like this also a habit of the birds of that tribe? Like birds tearing out their feathers with their beaks…

Or do other people do this too?

I was curious, but I couldn’t ask anyone.

My face was burning just thinking about what had happened.

I hurried into the warm water.

Perhaps because Heinley had relaxed the muscles in my limbs this morning, I started to feel sleepy again as soon as I stepped into the warm water.

I lay drowsily in the water, gently bobbing my head up and down, and it was only when I heard Countess Jubel knock at the door that I came back to my senses, surprised.

Looking at the clock, it had been an hour since I entered the bathroom. I got up from the bathtub even more surprised and quickly covered my whole body with a large towel.