“What’s going through your pretty head?”

Heinley stared at Navier as she slept.

At dinner, she looked so cute as she stirred the peas that he wanted to memorize that scene and treasure it.

Now she had a really serious expression. She was definitely not thinking of anything good.

Heinley was very curious whenever Navier made that expression. What was she thinking? Why did she have such a serious expression?

He lightly kissed Navier on her cheek, ear, and temple as she slept. Then he rubbed his forehead against her shoulder.

He whispered softly in her ear, but didn’t get an answer. 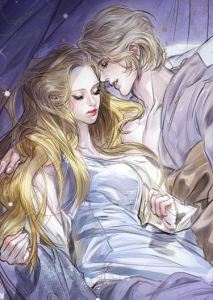 Still, Heinley whispered in her ear.

Anyway, if she were awake she wouldn’t give him an answer either. It wasn’t awkward at all.

“I wish to occupy your heart, even for just a day.”

Heinley laid his ear against her chest. The beat of her heart was very comforting.

This time, he raised his left hand and placed it over his own heart. His heart was beating a mile a minute.

“So, can My Queen believe in my heart too?”

He lightly kissed Navier’s shoulder and, unfortunately, had to get out of bed.

He wanted to stay in bed next to her, but he had work to do.

After covering her with the sheets, he kissed Navier one last time on the cheek and quietly left the matrimonial bedroom.

Mastas, who was yawning while leaning against the corridor wall, adjusted her posture with sleepy eyes.

“Your Majesty, you sent for me?”

“Have you rested well lately?”

Heinley asked with a smile, and went downstairs without even hearing an answer.

After a while, they arrived at the office where the lights were off. The knight of the imperial guard guarding the place immediately turned on the lights and opened the door.

Mastas continued to act like a noblewoman without etiquette, yawning or stretching her back. However, once the door was closed, she immediately straightened her posture and stared at Heinley.

There were also many loyal knights in the imperial guard, but Heinley’s relationship with the Underground Knights was more special.

Heinley trusted the Underground Knights, he had formed and raised since he was a prince, more than the imperial guards. This trust was often reflected in secret orders.

That was precisely the case now.

Heinley sat down at his desk and asked,

“Mastas. Do you know about the incident with my sister-in-law?”

Mastas responded with a snort and Heinley frowned.

Thereafter, Mastas spoke of how difficult the incident had been for Navier. She also spoke enthusiastically of the tremendous resolve Navier had shown in dealing with it.

“Yes. Even with my sister-in-law in Compshire I can’t rest easily. Just because she’s gone meekly now doesn’t mean it’s all over. There are still plenty of people left who support her.”

Although he threatened Old Duke Zemensia and managed to stop his immediate actions, he could not guarantee that they would all stand idly by.

“If I get rid of everyone at once, the strange rumor that I poisoned my brother will grow stronger.”

“And we don’t know who exactly started that rumor.”

“That’s why we have to be careful. A rumor is a way to divert attention. They decided to lower their heads for now, but we don’t know what my sister-in-law’s supporters will do.”

Mastas began to think, ‘But what did His Majesty call me for?’

Although he called her late at night because he supposedly had something to order her to do, he was just complaining about the situation.

But this was just a little introduction.

“Mastas. We have to attack this latent threat, right?”

“Of course, Your Majesty.”

“Go after her and kill her? I can disguise myself as a bandit.”

Mastas’ response was extremely harsh, with no respect for the former queen.

This was the difference between the imperial guard and Heinley’s personal knights.

Unlike the imperial guard, Heinley’s personal knights treated both the former king and the former queen mercilessly and without regard.

Heinley smiled softly and replied, “No.”

“So, threaten her? You don’t know what will happen to you if someone recklessly spreads another false rumor again.”

Heinley considered Christa a proud noblewoman, so he had thought she would leave for Compshire once the scandal spread. However, Christa made an unexpected move that defied everyone’s expectations. Heinley didn’t want to be caught off guard again by relying on vague assumptions.

“There were people on my sister-in-law’s side when she lied, people who even said they would follow her to Compshire now, right?”

“When they’re in the mansion with my sister-in-law, be sure to block all the doors and windows to prevent them from getting out.”

Mastas looked at Heinley in surprise. Did he want to lock them all up?

Heinley added with a hand on his chin.

“Block the doors and windows, but also make sure it doesn’t look like that from the outside. It must look like they won’t come out because they don’t want to.”

“Water, delicious drinks, alcohol, and tasty food. Make sure that the mansion is filled every day with these things.”

Heinley murmured with a broad smile.

When I woke up in the middle of the night, I didn’t feel the usual familiar warmth. This had rarely happened since I had slept next to Heinley.

Although it felt warm under the covers, it couldn’t compare to Heinley’s warmth. I tossed and turned in bed until I finally decided to get up, put on my slippers, and go out into the corridor.

Of course, he was not a child, and there were many guards around. Even if he sprained his foot, he would be taken care of immediately. Still, I was worried.

“Have you seen where His Majesty has gone?”

“He has gone to his office.”

He went to work at this hour?

After the knight’s response, I went downstairs slowly.

But there was no need to go to his office because I met Heinley on the stairs.

Seeing me, Heinley hurried up the stairs, took off his cloak and put it over me.

“Because I couldn’t see you…”

I woke up because I couldn’t feel his warmth, and I was embarrassed to say that I had gone out because I was worried about him.

“You might catch a cold. It’s still cold at night.”

A cold in this weather?

“Why are you so worried?”

“Because I care about you so much.”

Heinley whispered and wrapped me tightly in his arms.

In the Eastern Empire, a banquet was organized to welcome the warm weather.

However, this was just an excuse to organize a banquet.

On this occasion the banquet was organized by Sovieshu to examine Elgy.

Sovieshu mingled with the attendees as he glanced sideways at Elgy.

But there was nothing unusual in sight about Duke Elgy. He looked like an ordinary high society playboy.

However, just as Sovieshu set the empty glass down on the servant’s tray and was about to take a new one.

He heard a low shout nearby, “Oh my!”

Looking back, not far away, a young lady with short dark brown hair was looking at her dress with an embarrassed face.

Part of her dress looked damp as a glass rolled on the floor next to her.

Apparently, her drink had spilled onto her dress as she dropped the glass.

The young lady muttered as if she was in trouble and looked around, as if looking for someone to help her. Her gaze soon turned to Sovieshu.

Is that young lady asking me to help her? Sovieshu found it absurd. Me, the Emperor?

She did not appear to be under the influence of alcohol…

Sovieshu ordered the servant, who was at his side, to help the young lady.

The young lady was Rivetti. She had intentionally spilled the drink on her dress to catch Sovieshu’s attention.

Although her father and brother mocked her, she maintained her firm determination to seduce Sovieshu to avenge Navier.

However, Sovieshu turned his attention back to Duke Elgy without giving her another thought, so Rivetti was saddened.

Except for a few with good eyes, the rest just laughed and overlooked Rivetti’s attempt to ‘attract the Emperor’s attention’. Truth be told, the attendants didn’t even know what Rivetti had tried to do.

Rashta glared at Rivetti. She hated Rivetti, so she saw all her actions 125 times even more disgusting.

‘She tried to seduce my husband with that poor acting!’

Despite having become the Empress, she could do nothing against Rivetti at the banquet.

Of course, she couldn’t attack Rivetti after the banquet either because Viscount Roteschu would know.

When their gazes met, Rivetti frowned and turned her head away. She was anything but polite to the empress.

Rashta gritted her teeth and regretted that she couldn’t get rid of her right now, but then an idea occurred to her.

Why not have Viscount Roteschu destroy his daughter with his own hands?