At this rate, Sovieshu will try to make Evely the third empress, snatch my child from me, and divorce me. Just like what happened with Empress Navier! I must act smart and calmly. Empress Navier had an affair while married to Sovieshu, so immediately after her divorce she left with that man, but since I have devoted myself only to Sovieshu, I am in a difficult position.

Rashta quickly rummaged through her jewelry box and pulled out a large, beautiful sapphire necklace, giving it as a reward to the maid who ratted out her colleague.

“Do what you want, you can sell it or keep it. By the way, your mother is in prison, right?”

“I’ll use my immunity privilege to get her out of prison.”

I got used to my big work load, and my aides also got used to my way of working. Because of that, the efficiency and speed of work increased naturally.

Now I was sure that I could do some other tasks at the same time. I ordered an aide to send a letter to Grand Duke Kapmen to discuss trade matters with Rwibt.

Grand Duke Kapmen sent a reply about four hours later, and after that, we corresponded three or four times a day.

“Wouldn’t it be better to meet to talk in person?”

“When necessary. Right now there’s not much to say.”

I casually made up an excuse while putting off meeting with Grand Duke Kapmen.

However, my aides seemed to find it even stranger as the days passed.

The contents of the letters we exchanged were getting longer and the interval between each one shorter. My aides seemed to be thinking worriedly, ‘Did they fight?’

Fortunately, before their suspicions grew stronger, William and Mullaney each showed up with their own investigation reports.

I placed them on my office desk and read the reports slowly. First Mullaney’s, then William’s.

The two successors looked at each other sideways and waited anxiously for my response. Their expressions looked really serious and cautious.

After a moment, I asked the two as I put the report in my hands down on the desk,

“Did you do the investigation together?”

They both shook their heads, puzzled.

In less than three minutes, both of their faces became rigid.

It was definitely understandable. Their reports were quite similar, even in the errors.

“I don’t know who copied whom, but it wasn’t a good choice. I’ve done my own separate investigation, and there’s a lot of incorrect data in these reports.”

Mullaney and William looked puzzled. It was hard to tell who was pretending, and who wasn’t, as both had quite convincing expressions.

I deliberately spoke sharply and ordered them both to leave.

That night, Heinley laughed as I told him about what happened.

“I didn’t imagine that about them. How unexpected.”

“Like I said, I didn’t imagine that could happen.”

With my head on his chest, I lifted a hand and stretched his cheek.

“But was the report really that bad?”

“It wasn’t that bad. I was just trying to trick them.”

Heinley smiled, his eyes curved as if he’d read my thoughts,

“You did it to find out who copied the report, that will be the first one to visit you.”

I nodded and bit his cheek. Now that this had happened, there was only one thing I could do.

Wish it wasn’t Mullaney visiting me.

“My Queen? I’m nervous of you biting my cheek with such a serious look. I feel like you were trying to rip it off me.”

Three days passed, but contrary to expectations, neither Mullaney nor William came to see me. Both seemed to be clever.

So what should I do now… I was pondering carefully as I walked along, when I heard some whispering. But the content was very strange.

“It’s real. I don’t know how many people have seen it already!”

“I’ve heard about it too. It’s said to be a male ghost with a crown on his head.”

“Why would he become a ghost?”

“There is a rumor that His Majesty Heinley poisoned the Late King.”

The first part was a funny story. Even in the Eastern Empire, there were occasional fusses over ghostly apparitions. But the last part seemed rather malicious.

Although I had heard of that rumor too, I couldn’t believe it had been mixed up with the ghost story.

Instantly, the nobles on Christa’s side came to mind. Were they the ones who spread the rumor? Christa went to Compshire, but many nobles and officials who supported her stayed here.

Since they supported Christa, they could do nothing if she suddenly lost all her strength. Is it possible they were targeting Heinley to try to turn the situation around?

But I looked like the only one who was concerned about this. When I went to see Heinley around lunchtime, he already knew about the rumor. However, he didn’t seem to think it was related to Christa’s alies.

On the contrary, he asked me with a twinkle in his eye.

“My Queen, are you scared of ghosts?”

“If so, I can stay by your side from sunset to sunrise.”

“Actually, I am scared, My Queen. So… will you stay by my side from sunset to sunrise?”

“You don’t think this is related to Christa’s supporters?”

“Of course I think we should investigate it as well. But other than that, I’m scared, My Queen. I believe in ghosts.”

In fact, as soon as the sun went down, he stayed with me in my room even while I was working or reading.

“I’m scared, can we take a bath together tonight, My Queen?”

Although it seemed a little suspicious, Heinley was acting like he was really scared of ghosts. So I decided to reveal the ghost’s true identity for his sake.

In the middle of the night, I went with my guards to the place where the ghost appeared.

I didn’t sleep in the shared bedroom so I wouldn’t have to worry about Heinley waking up.

However, there were already other visitors at the place where the ghost supposedly appeared.

“Search carefully. There must be a device.”

Heinley was the first person I saw.

“What if it really is a ghost?”

McKenna was the second person.

“There is no ghost. I don’t care if one appears either.”

Who was this man who looked like my husband, and said without hesitation that there was no ghost?

Heinley, the one I knew, trembled in fear of ghosts.

Should I consider this other personality of my husband as the third person?

“But Your Majesty. If the ghost of the Late King appears, what should be done?” 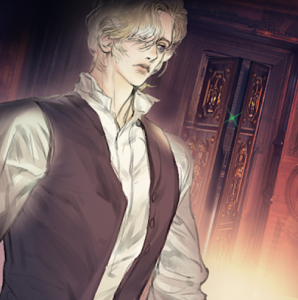