Rashta no longer needed the care of the palace doctor, so she visited Sovieshu and asked,

“I am very shocked by what happened, Your Majesty. May I go to the quiet countryside to recuperate and clear my mind?”

“Yes, the palace doctor said that Rashta had to relax for the baby’s well-being. But there’s a lot of trouble here…. right?”

Rashta wanted to go to Rimwell. Although the chair incident was unpleasant, she had been looking for a way to go to Rimwell for some time, so she considered this her chance.

“Where do you plan to stay?”

Moire was a small rural territory right next to Rimwell.

“I’ve been there before. The fresh air and beautiful scenery still linger in my memory.”

“Take many guards with you.”

In fact, Sovieshu not only provided her with many guards and especially sturdy carriages, but also hastily purchased a nobility villa in Moire.

She could have stayed at the residence of a noble family, but he had decided that it would be better for Rashta to enjoy her time freely in her own residence rather than stressed with all the unnecessary formalities.

Also, Rashta had been very depressed over the past few days, after the bandage was removed, and saw the scar left on her forehead.

It was a scar that ran from her forehead to one end of her eyebrow, the scar was a little thicker and longer than the palace doctor expected.

After cutting herself bangs to hide the scar, she felt a little better, but she still needed to calm her body and mind.

“Thank you, Your Majesty!”

Rashta was sincerely grateful and pleased. Recently Sovieshu acted aloof, so she was very glad that he had cared for her as before.

However, the day after her arrival in Moire, Rashta slipped out of the villa, immediately after leaving a maid in her place.

She went to a nearby village in a carriage she had prepared in advance to meet a man who used to admire her long ago.

It was this man who helped Rashta escape from Viscount Roteschu’s hands. If he still remained loyal, then she could entrust him with the task she had in mind.

She had previously conducted an investigation that revealed a shocking fact. The man lost an eye to severe punishment by Viscount Roteschu for helping her escape, but still he did not fail to defend Rashta and never said anything about it.

‘If he loves Rashta so much, then I can trust him.’

Rashta went to his house, convinced.

“Do you remember me?”

The man burst into tears when Rashta removed her hood. Even the basket in his hands fell to the floor, sobbing, unable to pick it up.

After entering the house and asking how he was doing, Rashta explained her situation with a sad expression.

“I barely managed to live like an ordinary person, but Viscount Roteschu keeps threatening Rashta.”

When Rashta began to cry, unable to speak anymore, the man snorted and punched the table angrily.

While the man loved Rashta, he also had a deep resentment against Viscount Roteschu. Hearing that the Viscount and his family were picking on his beloved Rashta, the blood in his veins began to boil.

“So, you ran away again? But coming here is not a good option, Rashta.”

“You’re the only one who can help Rashta. Please help me.”

This man would be willing to give his life for Rashta.

Rashta put her hands on his gaunt cheeks and burst into tears. Her appearance was so pitiful that the man vowed to protect the angel before him in any way possible.

“It won’t be a difficult request. I wouldn’t ask you to do something like that.”

“Don’t worry. Ask me for anything you want.”

“I want to hire an assassin.”

The man was completely shocked.

He was a commoner and had many bad friends. Naturally, he knew a lot about the dark side of the world. Although he had never resorted to them.

But this delicate and sweet slave wanted to hire an assassin!

“Rashta, do you want to kill Viscount Roteschu? Those who are skilled enough to kill nobles are really expensive.”

“Rashta will take care of that.”

“I’m sorry, Pix. It might go wrong, so it’s better if you don’t know the details. I don’t want to cause you any trouble.”

In the end, the man searched different guilds for the assassin who would be useful for this job while Rashta rested at home. Of course, he never revealed Rashta’s name in the process.

Besides, the guild headquarters seemed like a quiet, secluded store, definitely not a place where horrible things were done.

At the very polite question from the clerk at the counter, Rashta handed over a large jewel she had brought.

The clerk smiled subtly and said, “One moment, please.”

After about ten minutes, the clerk reappeared and opened the door behind him.

As she entered, Rashta could see a long, narrow corridor. There were numerous rooms on both sides of the corridor, and the clerk pointed to the end of the corridor with a finger.

“Don’t go into any rooms, just keep going that way.”

Although she felt a pain in her stomach due to nerves, Rashta did as instructed.

At the end of the corridor was a small, completely white space, with only a desk and two chairs placed in the center of it.

As she paced back and forth, unable to sit still in a chair, a tall man, with a mask covering his face, appeared shortly after from the same direction Rashta came from.

His eyes were so cold and sharp that one could tell at a glance that he was doing nothing ordinary.

The man dragged the chair in front of Rashta nonchalantly and sat down, but even after sitting down, he just stared at Rashta in silence.

Rashta, who couldn’t wait, opened her mouth with difficulty,

“You’ll do anything for money?”

“If I give you money… would you kill Pix too?”

If the assassin said no, she was going to change her words, saying, ‘I was just trying to see how far you were capable of going,” and if he said yes, she was really going to ask him to kill Pix as a test.

She wanted to check how heartless and skillful he was.

The assassin nodded once more.

The assassin got up, saying, “Wait here a moment.”

It had been quite a while as far as ‘wait a moment’ was concerned. Rashta felt like three or four hours had passed.

What the hell is he doing? Just as Rashta was getting tired of waiting, the assassin reappeared holding something wrapped inside a cloth. As he approached the horrible smell of blood intensified.

Rashta covered her nose and jumped up. What is this smell? She felt nauseous.

Unfazed, the assassin casually put down what he was holding on the table. When he released his strong grip, the cloth fell slowly, revealing a little of what was inside.

Seeing the disheveled hair and eye patch, Rashta couldn’t stand it and threw up. Despite Rashta’s state, the assassin ended up completely revealing the head inside.

Looking at the head on the table, Rashta vomited again.

However, she was soon glad. The assassin was heartless and skillful. If she used this man, it wouldn’t be a problem to get rid of Rivetti. 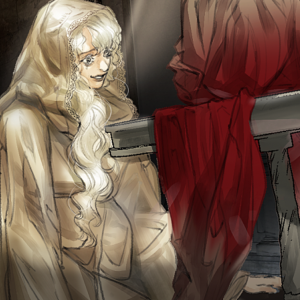 Wiping her mouth with her sleeve, Rashta asked,

“Can you kill nobles too?”