For fear of thinking about what happened to me with Heinley in front of Grand Duke Kapmen, I counted from 1 to 10 repeatedly from the moment he entered.

Grand Duke Kapmen paused to say through tears of laughter,

“I’m sorry, Your Majesty. It’s hard for me to understand you like this.”

“Don’t you understand me?”

“I hear your inner voice at the same time.”

What should I do? I couldn’t stop counting in my mind.

“I don’t know what thoughts you are trying to keep me from knowing, but after you hear this you won’t be able to think of anything else. One of the first three teams that left for the test trade has been arrested in Whitemond.”

He was right. Immediately, I couldn’t think of anything else.

For this reason, the Western Empire had leased several ports, the closest being Whitemond.

The Western Empire had used the port of Whitemond for more than twenty years, and one of the teams from this mission was scheduled to pass through that port to go to Rwibt. Being the shortest distance, it was also the team that was expected to get the best results.

But was it arrested?

“Was there a problem?”

“I don’t know the details. My subordinate, who was supposed to join the team and lead it, was delayed because he felt ill. Once he arrived in Whitemond the team had already been arrested.”

I got up from the couch hurriedly.

“I’ll have to talk to Heinley first.”

Although I was in charge of this, it was not something I could solve on my own if it was a problem between countries.

Why was the team arrested? Hadn’t Whitemond been an allied country since the West was a Kingdom? Why not now that the Western Kingdom became the Western Empire?

I hope the reason is not related to that. Otherwise, it couldn’t be easily solved…

I met Heinley as soon as I got to the front of his office.

“My Queen. In fact, I was going to look for My Queen.”

He was coming out of his office next to McKenna, who had a very serious expression.

Did Heinley have a smile?… Did I see wrong? Yes, I think I saw wrong. He also had a serious expression.

“My Queen, have you heard?”

“About what happened in Whitemond?”

“Yes. We received the information through a carrier pigeon, even the team members don’t know why they were arrested.”

Sovieshu, who came out dressed as a commoner, stopped in front of a store on his way to an undercover investigation.

The knight commander, who followed him, averted his eyes in the direction in which Sovieshu was looking.

It was a glass-fronted store, so you could see a painting inside in which a well-known person appeared.

The knight commander sighed inside. That person was the former empress. Empress Navier in a large painting.

Sovieshu stood still for a moment, lost in thought, before entering the store.

The store owner rushed over excitedly as the front door opened. However, the store owner’s footsteps naturally slowed down upon seeing Sovieshu.

Although he was dressed in commoner’s clothes and his face was half-covered, there was a pressure that naturally arose from Sovieshu.

The store owner, who had dealt with nobles on countless occasions, quickly realized that Sovieshu was a man of very high status and kept silent. Those of high status did not like to be asked questions first. It was better to let them watch freely.

Thanks to this, Sovieshu could fully appreciate the painting hanging on the wall without disturbance from anyone.

In the painting, Navier was sitting indifferently in a red dress. What was unusual was that Sovieshu himself appeared lying on her lap.

Sovieshu suddenly felt a pain in his chest. He felt short of breath.

The knight commander hurried over to Sovieshu to assist him.

Sovieshu waved his hand to indicate that he was well, and tried to ease the pain by lightly tapping his aching heart.

He had kept himself as busy as possible to forget the suffering he experienced in the Western Empire.

Why did I have to see this painting here…

He felt shivers as he remembered the unbearable pain. Sovieshu turned around and left the store.

However, he didn’t even manage to take three steps outside before he returned and said to the store owner,

“Sell me that painting.”

Although it was a store selling paintings, the owner did not originally intend to sell that painting.

He wanted to leave this painting hanging in the store as a good luck charm.

However, the intense pressure Sovieshu emanated was too great to refuse.

“That painting is very expensive.”

Determined, Sovieshu handed him a small money pouch. Then, he ordered the knight commander to cover the painting with a black cloth and take it to his bedroom.

Once the undercover investigation was over, Sovieshu quickly returned to the palace.

“It is in Your Majesty’s bedroom. I was waiting for you to tell me where you want to hang it.”

Sovieshu asked that the painting be hung where he could see it while lying in bed.

Once the knight commander left, Sovieshu sat on the bed and looked at the painting carefully.

It was a really vivid and beautiful painting.

Sovieshu spat a curse and clutched his head. His eyes began to burn.

He was fine now after suffering so much in the Western Empire. Why did this suddenly appear…

But despite the pain, he couldn’t take his eyes off the painting.

One slightly hot day when there was hardly any wind blowing, he had gone on a picnic with Navier in the field inside the Imperial Palace. That day, while lying on Navier’s lap, he pressed her chin and laughed at her. Navier, who was stroking Sovieshu’s hair, tugged on it as if she had done it accidentally. Consequently, Sovieshu turned around and tickled her feet.

Sovieshu could still vividly hear Navier laughing at the tickling…

Once again, his eyes tightened and a deep pain came over him.

As he was breathing hard, tears began to fall down his cheeks.

‘What does this mean? Why now?’

Even the painting looked blurry from tears.

As he wiped away tears with his hands, he found something in the painting he didn’t like.

Navier’s eyes. Instead of looking at him, her eyes were looking elsewhere.

“Where are you looking at?”

Sovieshu asked the Navier of the painting, as if she could answer. Navier had her gaze raised.

‘Why wasn’t she looking at me?’

This annoyed him, it seemed as if she was looking at someone else.

Sobbing uncontrollably, Sovieshu approached the painting and pressed his forehead against Navier’s dress.

There was no response.

Sovieshu fell to his knees and finally said between sobs, 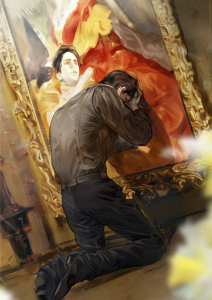