Heinley always cooked for me. So today I was going to cook for him to completely eliminate the awkward atmosphere between us.

I headed for the kitchen that Heinley often used.

The neat and tidy kitchen showed that it was designed with an emphasis on aesthetics rather than practical use, but was equipped with everything necessary.

After rolling up my sleeves, I thought about what dishes I could cook.

… Should I make an omelet? It was a classic dish. The most important thing was that I would do it by myself for him.

Yes. I’ll make something simple but delicious, instead of something I don’t know how to make well.

As soon as I made up my mind, I cracked the eggs into a bowl and beat them well with a fork…. an hour later, at dinner, I served Heinley the omelet I had made myself.

Heinley happily ate a piece of the omelet.

“How does it taste?”

“It’s the most delicious omelet I’ve ever tasted in my life.”

I know they were empty words, but they made me feel good. As I watched him eat, I tried to suppress the conflict of ‘love or stability’ that was going around in my head for the past few days

Just then, Heinley asked me,

Only then did I realize that I had barely tasted the food on my plate. Heinley suggested I try the omelet I had made myself.

“You should try it too, My Queen. It’s really delicious. I mean it.”

I took a piece of the omelet with a fork, popped it in my mouth, chewed it a couple of times and immediately swallowed it.

But it was strange. It looked delicious as he said, but it didn’t taste good.

Also, the taste of the omelet left in my mouth was somewhat unpleasant. Suddenly, I felt as if I had made a chick’s mush instead of an omelet, which turned my stomach even more. 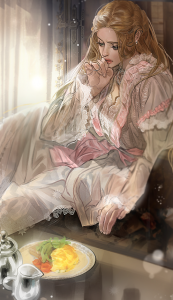 Once I hurriedly drank a glass of water, Heinley asked in a shaky voice,

“My Queen? Does it have any ingredients you can’t tolerate?”

“Are you feeling all right?”

Heinley reached out and placed his palm on my forehead. His palm felt cool and pleasant.

As I closed my eyes, Heinley murmured, “You have a slight fever. I’ll call the palace doctor, My Queen.”

“I’m fine. No need to call the palace doctor for not having an appetite.”

I shook my head quickly, spooned some of the salad made by the chef into my mouth and smiled forcedly.

The reason for my lack of appetite was obvious. I heard that Rashta wanted to kill my parents, wouldn’t it be strange to have a good appetite?.

The palace doctor would think I was exhausted from overwork, thus interfering with my duties.

I still had a lot of work, so I didn’t want him to call the palace doctor because of these symptoms.

When Viscount Roteschu, who had not been to visit Rashta for days, asked her,

“Have you by any chance seen Rivetti?”

Rashta almost let out a cry of extreme joy. ‘That assassin did it!’

Rashta asked, suppressing the delight in her voice.

“She hasn’t been back home for days.”

“Really?” Rashta asked indifferently, and added firmly, “I know nothing. Rashta isn’t close or related to her, right? I’m not interested in anything to do with her.”

Viscount Roteschu frowned, but did not reply. He was so worried about Rivetti that he didn’t even seem to want to argue.

“She’s not a child, she can go have fun without your consent. Worry about what I asked you to do.”

Finally, Viscount Roteschu left. The next night, the assassin hired by Rashta came to see her.

Rashta almost screamed in terror when she saw the assassin standing by the window.

However, she soon recognized the assassin’s peculiar figure and asked hurriedly,

“What happened to Rivetti?”

Rashta asked excitedly, to which the assassin replied indifferently.

“I kidnapped her and handed her over to an illegal slave trader. The money from the sale—”

“Give it to me. I’ll buy delicious food with it. I’ll give you the respective payment separately.”

When the assassin gave her the money he had brought, Rashta immediately pocketed it before giving him the agreed payment.

She was worried because the assassin had discovered her identity and had come all this way, but those who belonged to the assassin’s guild were renowned for their silence.

After checking the money and jewelry, the assassin nodded and turned to leave through the window.

Rashta stopped the assassin and asked,

“When that girl is sold by the slave trader, report to me where he sold her. Of course, I will pay you for this.”

When Rivetti was plunged into despair, Rashta planned to go see her and say, ‘How does it feel to be a common slave?’

The assassin nodded again and disappeared in the blink of an eye. Rashta sat on the bed and rejoiced.

‘Rivetti will either cry with a completely defeated expression, or spit curses of despair.’

Rashta clutched her belly, she found it pleasant to imagine that she could take revenge on an enemy in the same way.

Soon after, when the maid Rashta had sent to Evely came to see her after managing to steal Evely’s necklace, Rashta’s spirits rose even higher.

Rashta handed her a large jeweled necklace and ordered,

“Keep watching the girl and let me know immediately if you notice anything strange. If His Majesty is seeking her out, send her gifts, or anything like that.”

“Of course. Trust me, Your Majesty.”

Left alone in her bedroom, Rashta snorted as she examined Evely’s necklace closely.

This caused her good mood to wane. Rashta threw the necklace on the ground and stomped on it several times.

Meanwhile, Rivetti found herself in a situation where she didn’t know what was going on.

On her way home from hanging out with her friends, she saw a terrifying scene. A scene of a crowd of people following her while pretending to be passersby.

She tried to run away scared, but lost consciousness after being attacked by someone.

When she woke up, she was locked in a cage where wild animals used to be kept. Suddenly, she saw a really evil-looking man laughing and giving money to another man covered with a cloak.

“Our customers enjoy destroying the dignity of haughty nobles. They are very popular. Still, they become filthy slaves after a few years. Look for me again the next time you need to sell another noble.”

Rivetti shuddered in fear. Filthy slaves? Where did this kidnapper take me?

When the kidnapper left, the evil man looked at Rivetti as if she were a big piece of gold and said with a smile.

“It seems someone has a deep grudge against you.”

“Please, please help me, I’ll give you as much money as you want!”

“Wouldn’t I get more money selling you than you could give me?”

“Besides, how do I know you’ll keep your word if I release you?”

The evil man smirked and left.

Rivetti, locked in a dark cage, called out to her father and brother in tears. But there was no way they could hear her from their comfortable home.

Rivetti spent four whole days in terror. During this time, twelve cloaked people came one after another to see her, discussed the price with the evil man and then left.

It was extremely painful to watch before her eyes as they calmly negotiated her price. Rivetti realized how cruel and heartless humans were. No one tried to rescue her even though it was obvious that she had been kidnapped.

And the last customer to come in on the fourth day bought Rivetti. He asked how much the others had offered, and without hesitation offered double the highest amount.

Rivetti was forced to follow this last customer, with both hands tied tightly behind her back and gagged.

She couldn’t remember how much she cried the ride in the carriage. Finally, the carriage stopped in front of a simple and beautiful mansion. Rivetti used to dream of such a mansion, but even this place was beyond her imagination.

However, when this last customer took off the cloak covering his body, Rivetti stopped crying and her eyes widened. Underneath the cloak he wore the uniform of the Knights of the Imperial Guard.

He set the cloak aside and politely apologized to Rivetti.

He untied the ropes that bound Rivetti’s hands and removed the gag before stepping back again.

Staring at the knight, Rivetti asked between sobs,

“My name is Oreleo, a member of the Knights of the Imperial Guard. His Majesty ordered me to rescue Lady Rivetti.”

If it were the child of a Grand Duke, the Emperor could directly order his knights to rescue it, but Rivetti knew that her family had no such status. Therefore, she could not believe that Sovieshu’s name came out of nowhere.

While Rivetti was puzzled, the knight said,

“Lady Rivetti, Rashta is the culprit for your kidnapping.”