A few days ago, when it became known what happened in Whitemond, only the people involved met to come to a conclusion.

But today, when the official meeting was held, even people who were not directly involved attended to discuss the matter.

Of course, all the people who were not directly involved were from the Western Empire, so if things with Whitemond were not resolved well, they would also be affected in some way as well.

That was probably why the attendees were enthusiastic and strongly held various opinions throughout the meeting.

“Even if this incident is resolved without much trouble, you never know when Whitemond will betray us again. We have to attack before we’re attacked!

“What is the need to create a conflict? First, let’s observe how the situation develops.”

“Do you mean to say that action must be taken after disaster strikes? What about our people who will lose their lives in the process?”

“If we go to war when nothing has happened yet, what crime will the innocent people of Whitemond have committed?”

“This is not a simple problem with Whitemond. This is a fight between a country that disapproves of our self-proclamation as an empire and a country that must establish itself as such!

“It is time to show our status and power as an Empire. Whitemond must be used as an example!”

They talk about war with ease.

Well. Even if the people of Whitemond felt uncomfortable, they should have communicated with the Western Empire first. Why did they suddenly arrest the team passing by?

I could barely keep my lips from twitching, as I wanted to express my opinion.

It was delicate for me to intervene in a problem between countries when I had been here for less than a year, so I had to be careful with my words.

The people of the Western Empire still considered me a foreigner.

Fortunately, the topic of the meeting changed after a long discussion, and thereafter the tense atmosphere calmed down somewhat.

But when the meeting was about to end.

A nobleman raised his hand to ask to speak. McKenna, who was in charge of the meeting, gave him permission to do so.

Why was he shaking so much? Was this his first time? Maybe he was a new official.

I looked for a moment at the man whose name and face I didn’t remember, then lowered my gaze as I thought of other things.

However, I looked back at the trembling official upon hearing his unexpected words,

“It is rumored that the Emperor of the Eastern Empire divorced Her Majesty Navier because she is infertile.”

Naturally, I frowned. As I looked at him with narrowed eyes, the official’s trembling became more intense.

Why was he shaking so much?

“Of course, I don’t believe in an absurd rumor like that.”

If he didn’t believe it, he wouldn’t bring that up here.

“But it is a very frightful and important rumor, so I felt I should ask the Empress if it was true.”

The nobleman, clasped his hands, stared at me and asked as if he was going to cry,

“Your Majesty the Empress, is the rumor true?”

While it was this nobleman who addressed me, it was probably someone else who persuaded him to ask such a question.

Marquis Ketron looked at me with the corners of his lips turned up.

When our eyes met, his smile widened.

At my firm reply, his smile became even stranger.

On the contrary, Heinley had an icy expression.

Once the meeting was over, I deliberately approached Marquis Ketron.

The nobles who were conversing with him greeted me hastily and left instantly.

I suppose the Marquis had no intention of hiding the fact that he had asked a low-status official to bring up the rumor of my infertility. His face seemed to say, ‘I did it.’

Did he know he had a truly wicked and insidious smile?

Instead of accepting his greeting, I said flatly in a low voice,

“Even if I were infertile, the next empress would not be from your family.”

“No matter how much you cling to false hopes, it is useless.”

Marquis Ketron frowned. It seemed that he did not expect me to speak so bluntly.

He also opened his mouth. From his expression, it was obvious that he wanted to say something that would make me angry. Alright, I’m ready.

But before Marquis Ketron could speak, a long spear passed by me from behind.

Marquis Ketron quickly reached out his hand and grabbed the spear, stopping it just before it struck him in the forehead.

It was a Knight of the Imperial Guard standing behind Heinley who threw the spear.

The knight was surprised and hurried to apologize to Heinley,

“Don’t worry about it. It’s possible to make a mistake.”

He might have made a mistake, but in this case, wouldn’t it be Marquis Ketron, who was about to be struck by the spear, to whom he should be apologizing?

Finally angry, he spat out some words that I did not know against whom they were directed, politely said goodbye and left the meeting room first.

While I was taking a bath, I remembered what Marquis Ketron had said through another official.

Leaving aside what he intended to accomplish with his words. Was such a rumor really circulating? Why hadn’t I heard about it before?

If such a rumor was going around, Nian or my ladies-in-waiting would have told me.

So then did Marquis Ketron make it up? Why would the Marquis make up such a rumor? Did he really make it up or did someone tell him about it?

Was it Rashta or a noble of the Eastern Empire? I don’t think it was Sovieshu.

The Marquis would not have made up a rumor that did not exist at all. Mainly, because the risk of doing so was too great.

For that reason, he also created two safety measures, ‘speak through someone else’ and ‘speak as if you don’t believe the rumor’.

I think I spent too much time thinking. Before I knew it, the warm water had gone cold.

After getting out of the bathtub, I toweled my body dry, put on a robe, and left the bathroom.

I stood in front of the mirror to towel dry my hair as well. Meanwhile, I could see Heinley sitting in an armchair through the mirror.

He had a serious expression, with his head bowed and not even moving a muscle. He had been like that for a while. 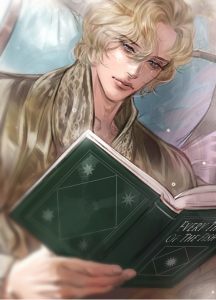 I wrapped my hair in the towel, pulled it back, and walked over to him.

“What are you doing?”

I noticed he was reading an encyclopedia of fish.

I asked, finding it lovely that he was reading an encyclopedia of fish so intently.

Heinley was slow to come to as he was immersed in the encyclopedia, and smiled mysteriously,

“Ah. I’m getting ready to fish. I saw a rather large fish prowling around today.”

Why does he look so evil if he’s smiling sweetly?

I reached out to touch Heinley’s cheek. Then he rubbed his cheek against my palm.

“I’ll cook you a delicious fish after I go fishing, Queen. I hope the Marquis suits your taste.”