When Heinley looked at the woman in surprise, Marquis Ketron’s satisfaction grew.

‘He’s an insolent brat. This wouldn’t have happened if he had listened to me earlier.’ Marquis Ketron muttered sarcastically, though inwardly.

It would have been more fun if the empress had been present on this occasion, but she was unable to attend the state council because she was too busy with other matters.

With every step the woman took towards the center, she attracted more attention from those present.

Unlike what Marquis Ketron expected, Heinley acted as if he knew the woman,

“My name is Meliya, Your Majesty.”

However, Marquis Ketron considered this situation much better.

Seeing that they had a pleasant conversation in front of everyone, people would believe even more in the old love between Heinley and the woman.

When Heinley asked calmly, Marquis Ketron bit his lips to hide his smile.

“I came here on a prior promise with Marquis Ketron.”

‘What nonsense she is saying…! While it is true that I brought her here, how can she openly say that I was the one who encouraged her to do this!’

“What did he promise you?”

“It’s hard to say here. I can let you know exactly what he promised me in private. But he didn’t keep his promise, he forced me to do absurd things that annoyed me and then he discarded me. That’s why I’m here.”

Marquis Ketron was stunned. What was this woman talking about now?

The woman acted as if there was some kind of agreement between herself and the Marquis.

The attention of those present turned to Marquis Ketron as they heard these significant words.

The Marquis could stand it no longer and stepped forward, speaking in as calm a tone as possible,

“That young lady claimed to be the mistress of His Majesty the Emperor. I considered it probable, so I promised to bring her before His Majesty. I thought I had kept my promise by bringing her here. But it seems the young lady does not think the same.”

As soon as he finished speaking the woman rushed at Marquis Ketron, shouting, “Traitor!”

But the knights stopped the woman before she could reach the Marquis.

“What the hell is wrong with you!?”

“You promised me, you even gave me this, are you trying to pass me off as a mad woman in front of His Majesty? You are truly cruel!”

The Marquis clenched his teeth. He could show everyone the necklace with Prince Heinley’s emblem, but then it would be clear that he had encouraged her to go against Heinley.

Once the State Council was over, Marquis Ketron angrily approached the woman.

“What the hell did you do?”

The woman smiled nonchalantly and replied,

“I did what you wanted. Just pointed it in another direction.”

She had a really calm and confident demeanor. She seemed firmly convinced of her actions, not even afraid to cause a stir at the State Council.

Back at home, Marquis Ketron realized he had fallen into a trap and immediately went to Heinley’s office.

“Was it a trap of Your Majesty’s? That woman was your subordinate?”

At Marquis Ketron’s forceful words, Heinley’s eyes widened enormously as if to say, ‘What are you talking about?’

He had such a puzzled expression that Marquis Ketron thought for a moment, ‘Was I wrong?’

Marquis Ketron was silent due to uncertainty.

Keeping that expression, Heinley pulled the Ketron Family emblem from his pocket.

Still wide-eyed, Heinley passed the emblem three times in front of the Marquis’s face, and smiled broadly as he put it back in his pocket.

“Many people are curious. They want to know what exactly is the relationship between that woman and Marquis Ketron, what did the Marquis promise her, etc. What should I do? What should I answer, Marquis?”

Marquis Ketron ground his teeth angrily. But he could not answer.

Heinley winked at him and patted him twice on the shoulder.

“While I think about what answer to give, you should also think about your behavior from now on.”

Heinley muttered and left first. For his part, the marquis shouted and stomped his foot heavily on the floor.

As McKenna stood in the corridor waiting for Heinley, he clicked his tongue as he heard the shout come from the office.

“He tried to harm Your Majesty once again, he should be thankful he’s still intact. What an idiot, right?”

“Magic, family, talent as a diplomat, I wouldn’t hesitate to replace him if he lacked one of these three. It’s a shame.”

Heinley also clicked his tongue and handed the emblem to McKenna,

“This will be his last chance.”

Heinley then acknowledged the great work of the Knight of the Imperial Guard who had thrown the spear at Marquis Ketron and guarded the woman’s house for weeks.

She had been invited to a tea party by the distinguished guests of the Southern Palace, but there they were too.

Viscount and Viscountess Isqua seemed very polite, perhaps because of the people present in the place, but they did tease Evely occasionally.

Birds of the same feather always fly together, even those who had been kind to Evely in the end were also nobles, so when Viscount and Viscountess Isqua made insulting jokes about Evely’s status, they laughed instead of stopping them.

Evely realized that the kindness of the distinguished guests of the Southern Palace had not been as sincere as she thought. They only acted like high-status nobles giving alms to a ‘nice commoner’.

Depressed, Evely returned to her room and untied the ribbon at the top of her dress with one hand as if to rip it off.

After undressing as if removing a suffocating coat, she hurried into the bathroom.

As she bathed, Evely realized she was missing the necklace she always wore.

Evely came out of the bathroom with a towel, without drying herself completely, and looked for it among her clothes, under the bed, under the rug, etc.

But the necklace was nowhere to be found.

After dressing, she headed back to the tea party, but it wasn’t there either.

Evely clicked her tongue, went back to her room and pounded on the table.

She always wore it. She didn’t know when, where, or how it disappeared. Seeing that it wasn’t in her room, she thought maybe she hadn’t lost it today.

Evely, who was furious, suddenly noticed something strange. 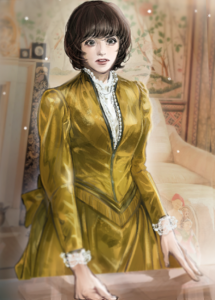 Evely calmed down and checked her own body for mana.

She could feel the mana how the mana circulated through her body, it was little, but her mana had returned.

When she wore the necklace, she did not feel anything no matter how hard she tried to check it before going to sleep.

She didn’t know the reason then, but upon checking it now, it seemed that the mana that had returned to her body was so little that it was buried under the mana in the necklace, so it couldn’t be distinguished.

However, now that she didn’t have the necklace, she could tell that her mana had returned.

Evely jumped for joy, and ran to the court mage.

The mage, who had told her not to run through the corridors of the Imperial Palace, shouted with happiness. The two embraced each other with great joy.

The court mage took a while to come to his senses and asked in surprise,

“I don’t know. The necklace I was wearing was a mana necklace. I also don’t know exactly when the mana returned because that necklace suppressed it.”

“Did that necklace return your mana?”

“Besides, I lost the necklace. I don’t know if it was stolen or I dropped it.”

“I will speak to the Emperor to have his subordinates search everywhere for it.”

The court mage assured her clever assistant. Then, he went straight to Sovieshu’s office, told him what happened and asked,

“So Your Majesty, please send your subordinates to search every corner of the Imperial Palace to find Evely’s necklace. If that necklace really helped Evely regain her mana, it might also help solve the phenomenon of mage decline.”

Sovieshu raised his eyebrows, took out a small box from a drawer and held it out to him,