The next day, he headed early to the Bear Corporation headquarters to sweep the floor himself while he organized his complicated thoughts. He used to do this when his head started to ache from thinking so much.

An employee who knew the president’s habit asked him in surprise when he saw him like this.

“President, is there something that worries you?”

“Hmm. It is a matter about Empress Rashta.”

Is there something related to the Empress that we should be worried about? The employee tilted his head thoughtfully. Suddenly, a memory came to his mind, “Ah.”

“By any chance, is it related to what happened a while ago?”

“Don’t you know? ​When the president was away, Emperor’s knights came to look for something related to that woman.”

“Yes. She was not the Empress back then.”

The employee’s words led the president to a clear conclusion.

The president considered that it would be the most convenient.

Even if the emperor’s knights had not come because of Empress Rashta, scandals had broken out one after another about the current empress who was less than a year old. That was certainly not a good sign.

When the president’s face turned cold, the employee looked at him curiously,

“I must send someone to the imperial palace.”

“I need to find out something.”

After these words, the president handed the broom to the employee. For his part, the young man was perplexed to suddenly receive it.

The president immediately went to his office and called his secretary.

The secretary entered with a haggard face because he hadn’t slept well, but seeing the president’s bright eyes, he patted his own face and asked,

“What do you want, President.”

“Send someone to the imperial palace to report that our old promissory notes have been counterfeited.”

“What?” The secretary was startled, “Isn’t that a lie? Besides, how does it benefit us to say that our old promissory notes have been counterfeited?”

“Our old promissory notes are not in use, right?”

The secretary’s expression turned puzzled. He had no idea why the president was acting so strangely.

Since a response had not yet been received from Whitemond, the incident was labeled ‘important’ and moved slightly off the priority list.

Pending a response, Heinley began to deal with what needed to be done right now.

To find out if other countries also felt threatened by the Western Empire, he sent a delegation with a handwritten letter personally to each country, and discussed with his trusted men the possibility of increasing the defense budget in preparation for future events.

These were delicate matters that needed to be handled with care.

Maybe that’s why Heinley, who used to approach me at night with renewed energy,fell asleep today as soon as he lay down on the bed.

As I watched him sleep, I gently placed my hand on his body. When I began to caress his flawless, smooth skin, Heinley scowled.

Even exhausted he looked handsome.

I crept up to his face after a moment’s hesitation. I rested my head on one hand, and with the other I played with his face.

Lovely, he is lovely. So lovely that he’s dangerous.

Heinley’s eyelids twitched as I gently blew out his eyelashes. He frowned again and buried his face in the pillow.

I put my hand in his hair and stroked it. It felt pleasant to touch it with my fingers. I froze for a moment as I kissed his forehead repeatedly because I thought I might have woken him up.

I checked his breathing and, fortunately, he was still sleeping peacefully. I was relieved, so I played with his cheeks and eyes again.

I felt confused looking at him.

Although I had feelings for Sovieshu, I only realized it just before the divorce. I was too slow in that regard.

I never thought I was slow before, but now I realize how slow I am.

How could Heinley confess and swear love to me without fear or doubt?

Wasn’t he afraid that I would leave him? How could I be so sure that he loved me?

As I played with his hair as usual, I felt a strange itch on my fingertips.

I stroked his hair a little faster to dispel the itch, but still the sensation did not go away.

What’s the matter? It wasn’t just an itch because it hurt. It felt worse than an insect bite.

The moment I finally tried to remove my hand from his hair, Heinley suddenly opened his eyes and turned his body to the side in fright.

A thud was heard as he fell out of bed.

Why did he act like that? I was shocked. When I put my hands on the bed to get up, I lost strength in my arms and fell face down.

Weak on the bed, I opened and closed my mouth. I was so bewildered I couldn’t even speak.

Just then, I could see why Heinley suddenly turned away. Blue ice, almost white, appeared where Heinley had been sleeping.

Nervous, I called him back as I slowly got out of bed. What was going on? Naturally I got scared because I couldn’t understand the situation.

Did someone break into our bedroom? Some unseen enemy froze only Heinley’s side?

Heinley responded as he stood up in front of me.

I was even more surprised to see him. His hair was covered in white ice as if he had rolled across a field of snow. 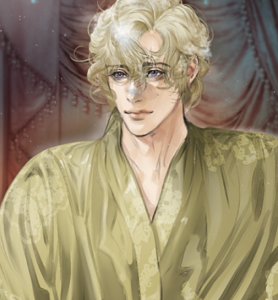 Heinley, who shook the ice out of his hair, looked at the side where he had been sleeping and at me. I couldn’t tell what he was thinking about.

“It looks like your body is slowly beginning to change.”

“Like I told you, the mana could circulate through your body with the help of this bed… and me.”

Heinley grabbed my hand, with which I had stroked his hair, and lifted it carefully.

“You mean that ice was made by me?”

As Heinley touched my hand very carefully, I examined my hand as well.

The itch from a moment ago had disappeared, and instead my fingertips were quite cool. Apart from that, there was nothing strange. I didn’t have ice on my hand, nor was it particularly cold.

Shook my head. I was just playing with Heinley’s body while he slept. I wasn’t thinking about doing anything, I didn’t want to attack him. Even now, I didn’t know what happened, so doing it again…

When I asked again, he immediately replied, “Yes.”

Heinley spoke firmly and slowly released my hand. Then he smirked and murmured,

“Now it really is your nickname.”

“It could also have been the Iron Empress. I’m glad it wasn’t.”

Heinley spoke in a joking tone, laughing as he shook out his hair, which still had traces of ice in it.

I was so excited that I couldn’t sleep a wink.

Did I use magic? Really? Really?

It was so amazing that I felt strange.

I never wanted to be a mage. Now that I could become a mage, I was too excited.

Even with breakfast in front of me, I wasn’t provoked to eat.

“If you can’t use it normally, it hasn’t fully manifested yet. Right now mana must be looking for the most suitable ability for you.”