His expression was full of disappointment. He didn’t even bother to hide it.

Marquis Karl would have been overjoyed if this was a princess born in a normal situation.

However, for this princess he had given up an extraordinary empress.

It was inevitable to have high expectations compared to a descendant of the imperial family born in a normal situation.

Under the circumstances, a baby girl would only be a loss for the Eastern Empire.

The baby had silky hair, black eyes and well-defined features. Her skin was wrinkled and reddish when she was barely born, but a few days later it turned (became) white and smooth.

The baby that looked like Rashta was the most beautiful girl Marquis Karl had ever seen.

However, what Sovieshu needed now was not a beautiful baby, but a healthy and intelligent successor.

Although he felt sorry for the baby girl, Marquis Karl could not help but feel dissatisfied.

“Your Majesty, will you have a second child with Rashta?”

As the emperor’s close aide, he knew that Sovieshu had been gathering evidence of Rashta’s crimes, which would become her weakness. Naturally, he did not believe that Sovieshu would have a second child with Rashta. But he asked anyway.

Sovieshu shook his head as he held the baby, then Marquis Karl said in an impatient voice,

“Your Majesty, in that case you should divorce Rashta as soon as possible, and this time bring a young lady from an honorable family to have the prince.”

He married Rashta for the baby in her womb, but that baby had already been born. Marquis Karl saw no need to choose Rashta who was in a difficult position in many ways to have a second child.

“The baby was born when Rashta was the empress, so the baby girl will still be a princess even if she is deposed.”

The baby touched both Sovieshu’s chin and cheeks with her small hands as she squealed.

Sovieshu shook his head again with a grave expression after listening carefully to Marquis Karl.

“If a new empress arrives, this baby will find herself in a difficult position.”

“Do you really intend to keep Rashta as the Empress?”

“By no means do I plan to. I intend to divorce Rashta. If a quick divorce is not possible… I’ll have to employ a harsher method.”

“And what about the Prince?”

Marquis Karl wondered who would give birth to the Prince. Suddenly, an image came to his mind and his eyes widened, “It can’t be.”

“Your Majesty, do you still expect Navier to come back?”

“I wish so. But even if Navier doesn’t return, there won’t be a next empress.”

‘Rashta will be deposed, but there will be no next empress… So what about the prince? What about the successor?’

Sovieshu looked with narrowed eyes at Marquis Karl as if he could clearly read his thoughts. Then Sovieshu said with his daughter in his arms,

“This baby has my blood, so it doesn’t matter if it’s a girl or a boy.”

“I will raise this baby as my successor, Marquis Karl.”

Marquis Karl was stunned for a moment.

“Your Majesty! The Eastern Empire has never had a reigning empress! Only a prince born of the Empress can become his successor!”

Marquis Karl was so astonished that he could not keep his mouth shut.

Although there were times when it was the Empress Consort and the Empress Mother who actually ruled, they only did so through the Emperors.

‘But Sovieshu will make the princess his successor!’

“That has never happened in history nor is it stipulated in law, Your Majesty!”

“When this girl becomes the first reigning empress, a precedent will be created in history. Nor does the law stipulate that only a prince can be the successor. It’s just a custom, right?”

After speaking firmly, Sovieshu held and looked at his daughter tenderly,

“The princess will be named Glorym. May all the splendor of the world shine upon this baby.” 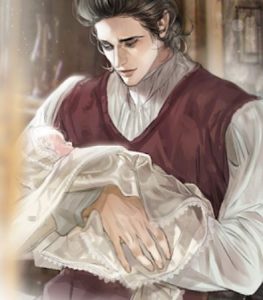 Marquis Karl sat on the couch on weak, wobbly legs.

“But many will object…”

“Of course I won’t make it public until the time is right. We have to prepare slowly.”

Sovieshu spoke categorically, and looked his daughter in the eyes.

Dozens of things were already going through his mind.

‘My daughter will be intelligent, and she will be even more so with the best teachers. She will need to acquire practical skills and learn about political affairs from a young age.’

Without an empress, this girl will have to dominate high society, so it will be convenient to establish connections early on.

‘Mages… yes, the priority is to solve the phenomenon of mage decline.’

The power of the Emperor of the Eastern Empire came from the mages. In order to easily suppress the opposition of the archaic nobles, he had to reorganize the strength of the mages and take absolute control.

‘This army must also be commanded properly…’

The baby made a strange sound, stretching her little hands in the air.

Sovieshu whispered, placing his fingers between her little hands. As if she could understand, the baby held Sovieshu’s fingers tightly.

Unable to calm his startled heart, Marquis Karl stared at him in a daze before sighing deeply.

Well. Times change and every story has a starting point. If the baby were to become as intelligent a woman as Empress Navier, then it would be quite likely.

“Your Majesty. Do you intend to tell Rashta that you plan to make the princess your successor?”

Sovieshu frowned and said with determination,