After I told my ladies-in-waiting that I was going to meet with McKenna, Mastas escorted me to the office door at the appointed time.

McKenna had arrived first and was waiting for me inside with a large box.

Was there a portrait of Heinley as a small boy in that box?

It seemed like there was. McKenna opened the box as soon as I entered, took out a small picture frame from inside and showed it to me.

“This is a portrait of His Majesty as a child.”

Although I hadn’t exactly come to see this, I was also curious, so I reached out and grabbed the picture frame.

Was Heinley seven or eight years old in this portrait? He looked to be about that age. When I saw little Heinley, I couldn’t help but exclaim,

Why did he have the face of a bratty child? Why did his cheeks puff out like he was upset? In contrast, he was always smiling now. 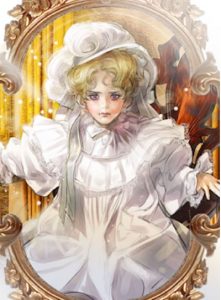 “Heinley was angry at the time?”

“Yes. The portrait was done against his will.”

“Look at this one too, Your Majesty.”

The next portrait McKenna gave me showed an even smaller, smiling Heinley. Here he was five or six years old?

I could not help but exclaim again. Even in the portraits in which he came out with a smile, that didn’t take away from his unruly nature.

I was so curious that McKenna showed me some more portraits.

As I examined them carefully, several puzzling questions came to mind. Hadn’t I come here to hear about Heinley’s childhood? Why did McKenna have this? Why did he keep so many portraits of his cousin?

“Did you get along very well with Heinley?”

Although I got along very well with my brother, I didn’t have that many portraits of him. At most I had two or three, but I didn’t even know exactly where they were stored.

When I asked curiously, McKenna smiled, put the portraits back in the box and said,

“Whenever His Majesty Heinley did something wrong, the queen ordered a portrait to be made of him as a disciplinary measure and also as a record.”

“Yes. His Majesty hated to sit still, so she punished him that way.”

Oh, so that’s why he used to show up with a bratty child’s face.

“Originally, the portraits were to be given to His Majesty when he was older, but His Majesty was caught trying to destroy the evidence when he was 12 years old. Since then, I’ve been in charge.”

It was nice to hear that, but no doubt… in his childhood he was a troublemaker.

My hands went up to my belly naturally. The baby had not been born yet, but I could already imagine my child causing trouble.

I knew nothing about disciplinary measures. Until now I had never thought about parenting or babies. Of course, it won’t cause any problems if it looks like me… no, if he looks like me, he might have the same problems I do.

As I pondered this, McKenna smiled and pulled out another portrait.

“The story behind this one—”

But before he could begin to speak properly, there was a knock on the door.

Looking back, Heinley was leaning against the door with a forced smile.

As Rashta walked through the Southern Palace, the distinguished guests strolling around exchanged glances and whispered to each other.

Everyone knew of the Emperor’s change in attitude towards Rashta. However, few were sympathetic. Most seemed to enjoy the fact that Empress Rashta was in a difficult position.

Clenching her fists, Rashta walked with her back straight and her head high. But as soon as she entered Duke Elgy’s room, she fell to her knees as if she had completely collapsed.

“What happened to you?”

Duke Elgy clicked his tongue. Unlike Viscount Roteschu, he was already aware of what happened in the East Palace. So he comforted Rashta.

“His Majesty will calm down soon. Even if not, Rashta has me.”

But Rashta hadn’t come for that, so she shook her head quickly,

“No, it’s not that. There’s another more serious problem right now.”

“Is there a more serious problem?”

“What should I do? Viscount Roteschu is too busy to help Rashta. He said to speak to His Majesty, but His Majesty won’t help Rashta at this time.”

“Do you know what your father wants?”

Rashta said sternly and tightly gripped the hem of her dress. As the fear disappeared, the anger increased.

‘But now he has come to see me. It must not be for a good reason.’

The mercenary hired through Viscount Roteschu had been commissioned to assassinate the Duke and Duchess Troby, and the assassin she personally hired had been sent to Rivetti.

It would be difficult to hire another of that level right away. Even if it was possible, she was completely reluctant to kill her real father. She preferred to send him to a place where she would never have to see him.

Duke Elgy patted Rashta’s back gently and clicked his tongue as if in pity.

“There is no alternative. In this case, it will be better to give the money he asks for.”

“I’m afraid that it will become a bad habit and he’ll keep asking for money, not just once or twice…”

“Still, it’s the best way to appease him. No matter how much money he asks for, he’ll probably keep his mouth shut because he’s Rashta’s real father.”

“Of course. How much money do you think he’ll ask for?”

“But Rashta doesn’t have enough money to give him right now. Just a small amount.”

Duke Elgy smiled as if he found it funny that she was worried about that nonsense, walked over to the desk, wrote something on a piece of paper and brought it over. It was a check with a huge sum of money written on it.

However, Rashta did not immediately accept it like she used to, and muttered,

“If you do this, Rashta… Rashta seems to be getting too much…”

Not much time had passed since the case of the Empress Navier’s promissory notes came to light, so she was wary of suddenly accepting a huge sum of money.

“It’s fine. It’s not an inordinate amount of money.”

Duke Elgy, who added in a sweet and soft voice, “Not for the first or second time?” Offered the check to Rashta again.

That was true. Rashta soon convinced herself and accepted the check.

“Friends should help each other.”

“The port you wanted… Rashta will try to give it to you.”