In the end I came alone to the restaurant Heinley and I had planned to come together. I sat at the same table as before, ordered the same dishes from the menu and, as I waited for the food to arrive, pondered Sovieshu’s and the dean’s words.

Sovieshu’s expression turned dark when he mentioned the phenomenon of mage decline. The dean emphasized that he was a mage and a citizen of the Eastern Empire, furthermore he spoke of ‘suspicions’.

What ‘suspicions’ exactly? Do they both think that the Western Empire caused the phenomenon of mage decline?

Perhaps that is the case.

Otherwise, the dean’s cold attitude and Sovieshu’s sudden seriousness, who had been begging me to come back, made no sense.

However, the suspicions were truly absurd. How could the Western Empire do such a thing? What kind of person would Heinley be?

… What kind of person.

I suddenly remembered that I, who didn’t have a bit of mana, was becoming a mage. I also remembered the side effects of the mana bed that Heinley told me about.

I felt an inexplicable tightness in my chest. I forced myself to drink some cold water to dispel the doubts.

Although Heinley was quite cunning, he couldn’t be that cruel.

How could he be stealing the mages’ mana? The image of Evely suffering was so vivid in my mind that I couldn’t believe that Heinley was the cause of it. It was nonsense.

Fortunately, the waiter brought the food I had ordered before I gave it any more thought.

But by then I had lost all appetite. The appetite that I hadn’t had for a while. Even though my stomach growled with hunger, I frowned at the mere act of putting food in my mouth.

While I was trying to eat against my will, an employee brought me today’s newspaper.

I said with a forced smile and opened the newspaper with one hand. My mind was confused, so I wanted to think about something else.

As soon as I opened the newspaper, my attention immediately focused on Rashta’s name which was in an article.

I left the spoon to hold the newspaper properly.

Had a man appeared who claimed to be Rashta’s real father?

This was news that had not yet reached the Western Empire.

I had told Countess Jubel that I had something to think about, so she sat at a separate table behind me. Just now, she leaned back to see if I had also received a newspaper from the employee and whispered,

“Your Majesty, did you see this in the newspaper?”

“Oh my. What’s this all about? I’ll keep the newspaper. Is there anything more delicious?”

I read the newspaper carefully. The man who claimed to be Rashta’s real father had appeared a few days ago. Of course, Rashta denied it.

I could imagine it. After she made up noble parents to dispel rumors that she had been a slave, she would never accept a common man as her real father. Even if he really was.

However, she seemed to have changed her mind in the end. She said that the man who claimed to be her real father had raised her as a child for a time, even though he was not actually her father.

The man also suddenly changed his stance after Rashta made such a statement, he agreed with her words.

The journalist named Joanson, who wrote the article, questioned this between the lines, ‘how could a person change his side of the story so drastically?’, and subtly raised suspicions that the man had been threatened or received money.

“It’s amazing, it’s amazing. Your Majesty. Did you read this part?”

I nodded as I continued reading the article. Countess Jubel called me noisily again.

“That woman must have made this journalist angry. He’s raising suspicions from several angles.”

The journalist apparently targeted the real father in the article. Is he a swindler?

But the fact that he dared to raise the issue of money and threats indicated that it was actually an article he had written to hurt Rashta.

In any case, it seemed that Rashta declared that she would support both the newly appeared man and her real noble parents.

But this journalist attacked Rashta in the last part of the article while pretending to be worried about her.

[The Empress really has a good heart. It is very kind of her to want to support both, but an empress must also have determination. Ordinary people often fall victim to scammers for being too kind, if the Empress acts the same way it could harm the whole country. Wouldn’t it be better for Her Majesty to take a test at the temple to find out who her real parents are, and thus support only them?]

“Good heavens! How can it taste so good?!”

I could hear Countess Jubel’s cheerful voice behind me. I drank water and folded the newspaper.

Earlier, I was so focused on what happened with Sovieshu and the dean that I didn’t notice the whispers about Rashta. Everyone in the restaurant was talking about her.

From, “There is also the case of the promissory notes, Empress Rashta is a liar,” To, “This journalist always speaks badly of Empress Rashta. His words are not to be trusted.”

‘Wouldn’t she be happy next to Sovieshu and her daughter? What happened, Rashta?’

A few days later I was back in the Western Empire.

Upon arrival I had to calm Heinley, who came up to me like an anxious puppy. Then I told him what happened with Sovieshu and the dean.

“I know you would never do that. There seems to be a misunderstanding.”

“So you didn’t get any help with the mana?”

“No. In fact, I wanted to visit the dean again, but… I didn’t because he was upset.”

I gripped Heinley’s hand tightly, kissed the back of it, and said,

“You wouldn’t hurt other people with such lovely hands.”

“Heinley. I don’t think you would make other people suffer like Evely suffered.”

“I’ll ask Grand Duke Kapmen about the mana. The Grand Duke took classes at the academy from start to finish, so he could help me.”

I didn’t bother to talk about Rashta. There was no need to.

Heinley hugged me tightly without a word.

That night, lying on Heinley’s chest with my eyes closed, all the worries of my trip to Wirwol melted away.

Before I knew it, he had become a special person to me. This prince from a neighboring country, who was both like a huge puppy and a cunning eagle, was now my husband. Just being by his side made me feel comforted.

Immersed in the fragrance of his body, the weariness of the past few days washed over me and I fell asleep as I caressed Heinley’s muscles.

When I opened my eyes again, I was puzzled that Heinley was not next to me. 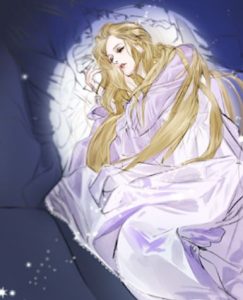 I thought maybe he had something to do, so I was going back to sleep. However, I suddenly felt very hungry. I wanted to eat the bread that Heinley used to make.

I hadn’t eaten well in days, so I got up and went out to look for Heinley.

He’s not in his room…

So I went to his office. The office door was closed.

At that moment I unconsciously touched the doorknob, thinking about returning to the bedroom. A thin layer of ice came out of my hand, the knob froze, and after a slight click, the door opened almost noiselessly.

Heavens! Tomorrow I should meet with Kapmen!

As I stared perplexed at my hand, I heard a soft voice through the slightly open door.

“Send the crow to check on the situation. If he thinks that we’ll be discovered because of that necklace, he must do whatever it takes to get it back.”