Heinley called McKenna into his office in the middle of the night. As soon as he entered, Heinley told him,

“I think we have a problem.”

“A problem at this time of night?”

“It’s related to the phenomenon of mage decline.”

“How can there be a problem?”

The logic for stealing mana from a mage was simple. However, it was not easy for all the conditions to be met, so people did not realize that simple logic. It was only because of a terrible accident in his childhood that Heinley even became aware of these conditions.

“It’s because of the mana necklace.”

McKenna let out a slight sigh.

“It’s still not certain that the necklace is a real problem.”

“So, should I go there to check out the situation?”

He wanted to go check on the situation so he could take a break. Work has been hard lately. McKenna volunteered again, happy about the excellent idea he had come up with.

“There’s no one better than me to do this. I’ll go check to see if the necklace poses a real problem, Your Majesty.”

“You have work to do, McKenna.”

“Just kidding. You’ll draw too much attention. You’ve already been hit by an arrow.”

Heinley’s expression changed between concern and seriousness, then he thought for a moment before he continued.

“I would like to send someone who is inconspicuous and cautious.”

“What do you think of the crow? He’s small and fast.”

“All right, send the crow to check on the situation. If he thinks that we’ll be discovered because of that necklace, he must do whatever it takes to get it back.”

“If he can’t bring it back, then he must destroy it.”

Once Heinley was done with the matter, he patted McKenna on the shoulders and headed for the door to leave.

At the same time, McKenna sighed inside himself.

He was done with today’s work. He would now return to his room to get some rest and try to resolve some issues with Heinley in his dreams.

However, Heinley remained standing in front of the door instead of opening it. Although he only had to turn the doorknob, he stared at it with his hands down.

As McKenna approached he asked,

“What is it, Your Majesty?”

It was then that Heinley let out an, “Ahh”. There was no other response.

As soon as McKenna looked at the doorknob Heinley was staring at, he immediately shouted, “Huh?!”

The doorknob was white.

The doorknob had turned so white that even the naked eye could tell it was frozen, and the ice on top of it seemed to rise 0.7 cm. Someone had just frozen the doorknob.

McKenna was quick to murmur in surprise,

Only a mage would be able to do this, but as far as McKenna knew, there were no ice mages currently in the imperial palace. In fact, there were very few mages in the Western Empire.

McKenna asked in panic. However, Heinley’s expression was calm. Heinley put a hand on the doorknob without a word. When his hand touched it, the ice came off the frozen doorknob easily.

Are these three the key words…?

Instead of running away when the conversation abruptly ended, I should have walked in and asked directly, ‘What are you talking about?’

After I wandered around for a while, I went back to bed and lay on my side.

But Heinley’s words kept coming into my head. Was he really involved in the phenomenon of mage decline? What connection could there be between a crow and a necklace? What if Heinley had to do with such a phenomenon… What should I do?

I remembered how Evely had sobbed at having lost her mana.

At that moment, I heard the sound of the door being opened. The sound ran through every inch of my body. I hastily closed my eyes and wrapped up in the sheets. As soft footsteps approached, my heartbeat quickened.

Then I felt the presence of a person close to my face. 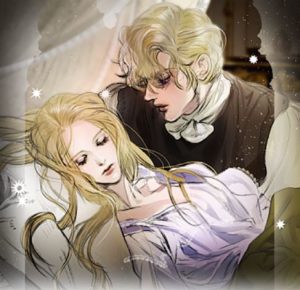 The voice that whispered in my ear was low and affectionate. It was clearly from my Heinley.

His voice was warmer than the sheets. After he kissed me on the cheek with his full lips, he carefully lay down on the bed and pulled me into his arms.

I could feel Heinley’s muscular chest touch my back and his breath on the back of my neck.

My heartbeat gradually calmed down. I removed my hand from the sheets and placed it on his arm that was wrapped around me.

Even if Heinley was stealing the mages’ mana, I couldn’t blame him. He seemed to have a competitive spirit against the Eastern Empire. In fact, it was a rival country.

Heinley was the Emperor of the Western Empire, so it was only natural that he would want his country to be at the top.

I came from the Eastern Empire. My parents, my brother, my family, my ancestors and my friends were all there.

However, I couldn’t trample on the Eastern Empire to love the Western Empire.

Heinley should know how I would feel if he was involved in the phenomenon of mage decline.