Of course, it is possible that her behavior was different from former queens because she left in shame. However, it wasn’t like Christa to turn everyone away. She would at least have accepted the visits of her followers.

The duke’s fears were realized a few hours later.

The mercenary, who sneaked into the mansion in the middle of the night, returned to the inn before dawn and reported to the old duke.

“All the windows and doors in the mansion are blocked. There are some open windows that are situated too high and are so small that absolutely no one could get through there.”

“There was a small aperture at the bottom of the front door. It seems that food and drink are brought in through that space.”

‘Heinley, that bloody Emperor has imprisoned my daughter!’

He shook his hands angrily.

Even after the mercenary left, he couldn’t even sit up in bed. He felt distressed, disgusted, and indignant, as if his body would explode if he stayed still.

How could a brilliant girl, who cared about others, be imprisoned and isolated!?

He was angered by the way the cunning emperor acted behind the scenes as he pretended to cover up the scandal by sending Christa to Compshire.

Even now, there were those who were concerned because they felt that the measures taken by Emperor Heinley had been too soft.

But what made him angrier was that in this situation he did not have the power to get rid of the knights and free his daughter.

Unable to suppress his anger, the old duke threw a bottle of wine that was on the table to the floor.

When the bottle shattered with a crash, red wine flowed across the floor like blood.

“Emperor Heinley, I will not let this go…”

In that way, the old duke immediately left Compshire and returned to the capital.

What he did as soon as he returned to the capital was to get a food called ‘Jesslen’.

That food tasted good and was healthy, but it had a negative effect on the fetus. It was a food that every pregnant woman should avoid.

“Will you give it to the Empress?” The subordinate asked the old duke in surprise, “Isn’t it dangerous?”

If she was pregnant, she would not eat it even if he sent it to her. Instead, she might begin to doubt his intentions.

However, the old duke replied,

“No. Soon there will be a great prayer to be organized by the emperor. This food will also be an offering in the great prayer.”

“She has to eat what is served there. Have someone make sure it’s put on the altar.”

In the Western Kingdom there was an event called ‘Great Prayer’ in which offerings were presented to the king and queen. The time had come to celebrate it.

It was expected that the event would still be held despite having become the Western Empire, so I asked my aides to explain the event to me and practiced a bit.

Overall, what I had to do was not difficult. I was just a little worried about having to eat at the event.

“… a total of six foods are presented as offerings. The priest checks that they are not poisoned. Then the foods are to be consumed by the Emperor and Empress.”

Lately I couldn’t eat anything, except for some of the dishes Heinley prepared. I didn’t have morning sickness, but my stomach would turn whenever I put something in my mouth that I didn’t want to eat.

I really had to eat six different foods…

“You don’t have to eat it all, but just enough to make a good impression, Your Majesty. Be careful not to spill the food. Although it’s not serious, it’s considered unlucky to spill food.”

That was very serious.

An emperor or empress was never to do anything that was considered unlucky because if something bad happened in the future, it would immediately be attributed to them and they would easily become the target of people’s resentment. Even if they were really unrelated.

I thought about it for a while. What if I revealed that I was pregnant so I wouldn’t attend the event?

Wouldn’t it be terrible if I ended up throwing up something I didn’t want to eat?

However, the infertility rumor trap, set by Heinley and I, was working too well to reveal my pregnancy at this time due to the event.

How many times had I already updated the nobles’ danger level?

Is it okay to remove the trap just because I didn’t want to eat a bit? No. Certainly not.

Well, it’s not like there’s going to be food that’s harmful to the baby, right? I’ll just have to make an effort.

However, the situation was worse than expected.

After a few simple procedures, when the food that had been examined was placed in front of me, I almost laughed wryly.

On the table was food that was nutritious, but could not be eaten by pregnant women. I thought it would be fine as long as it wasn’t food like this. Unfortunately, that was exactly what was served.

Heinley also frowned as he recognized the food I couldn’t eat. When our gazes met, he smiled forcedly.

Since neither Heinley nor I were eating, the priest who was helping us lead the event called us in a surprised voice.

I put my hands on my belly. It had been about two months.

In fact, I wanted to delay the baby announcement as long as possible. At least until Heinley’s birthday.

By then, the hostile nobles would be practically decimated at Heinley’s hands.

But because of the current situation, there was no other way out. I couldn’t eat this, so I had to reveal the truth.

With a bright smile, I looked alternately between the priest and Heinley. Since I had decided to reveal it, it was best to do so with as happy an expression as possible.

The priest called back to me in bewilderment. Instead of answering, I extended my hand toward Heinley.

Heinley seemed to understand me and quickly grabbed my hand. Then he raised it, kissed the back of it and smiled splendidly at the priest.

The priest’s face, who was forbidden to have a love relationship, began to blush. No matter how married we were, anyone would wonder what we were doing now in front of a priest who couldn’t date anyone in his life.

Heinley turned his head to look at the nobles. The nobles were not embarrassed, but seemed puzzled to see the emperor and empress so sweet to each other, without eating what had been served to them.

With a broad smile, Heinley leaned over to me, placed his hand lightly on my belly and said loudly,

“This time I’ll have to eat alone. God won’t want his child to get sick from eating this.”

The nobles didn’t immediately understand. Then, I smiled at them with overflowing happiness.

If this food didn’t appear here by coincidence, it was someone’s dumb plan.

“I have two months…”

It was enough to tell the truth.

Sovieshu, who had Glorym on his lap, dropped the baby’s toy he was holding in one hand at Marquis Karl’s report. As a result, the princess burst into tears.

Sovieshu took the baby in his arms, patted her on the back and asked Marquis Karl.

“It can’t be. Repeat what you just said.”

“Navier is pregnant, Your Majesty.”

Sovieshu jumped to his feet. His eyes widened in shock.

“Who told you? Is it someone you trust?”

“Navier revealed it personally in front of the nobles of the Western Empire at an event.”

Sovieshu’s eyes withered like a plant without any water.

The princess flailed in his arms and slapped his stiff face with her small hands. When the princess began to pull his hair, Sovieshu finally came to his senses.

But he still had a distorted expression. Sovieshu’s hands trembled so much that Marquis Karl repeatedly raised his own hands. He feared that the Emperor would drop the baby.

Fortunately, Sovieshu did not drop the baby and sat back on the couch.

He held the princess tightly in his arms as if she were his last hope and let out a sigh.

During the years they were married they were never able to have a child.

‘She got pregnant less than a year after she went to that country?’

Thanks to the arrangement made to her eyes, Navier was now looking at him in the painting.

‘If Navier was not infertile, had all the plans and the divorce been in vain? I left Navier for a child, but it turns out she wasn’t infertile…’

All his movements and thoughts stopped. He even stopped breathing.

Sovieshu’s arms, which held the baby, tensed. Sovieshu looked down with fearful eyes.

He saw the beautiful silver hair that resembled Rashta’s. The silver hair on her little head was as soft as a lamb’s coat.

Sovieshu had never seen such silky hair before. But his eyes were tinged with fear.

‘What if the one who is infertile….. was not Navier, but me?’ 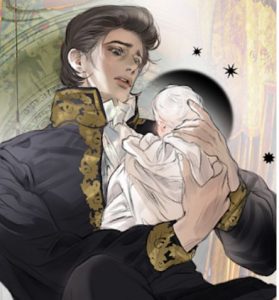