A murmur came from the bushes.

Viscount Roteschu was about to enter the Western Palace when he suddenly heard the voice.

Viscount Roteschu turned around and headed for the source of the sound.

There was a small circular space cleared between the bushes with short grass. Rashta was sitting there in a large nest chair, holding a doll in her arms and murmuring.

Seeing Rashta murmur while stroking the doll (as she stroked the doll), Viscount Roteschu clicked his tongue in astonishment.

“Has she really gone crazy?”

Suddenly, Rashta stopped and looked up.

When she saw Viscount Roteschu, her dull eyes came alive again. Then, she pushed the doll away with a frown.

“I was practicing how to hold a baby.”

Viscount Roteschu felt calmer as he heard her sharp voice full of resentment.

“I couldn’t hold my baby. I couldn’t hold her well, so I have to practice. I can’t drop her again. Otherwise, I won’t be able to see her face anymore.”

“What nonsense are you saying?”

As he was listening to her talk, Viscount Roteschu quickly approached her. Looking around him, he said in a low voice,

“Wake up. I have information about the daughter of the Isqua Family you asked me to find.”

“Don’t look for her, there’s no need. Do you think I’m interested in finding someone else’s daughter?”

Rashta, who spoke decisively, stared at Viscount Roteschu and let out a laugh,

“In fact, you’re looking for someone else’s daughter even though your own daughter is also missing.”

Viscount Roteschu’s eyes reddened for a moment at the mockery.

Rashta reached up, slapped him twice on the cheek, and smiled.

“You’re being punished. I lost my child because of you, so you lost your child too.”

“Have you really gone mad?”

“I don’t care what you think. Rashta is busy, so speak at once and then leave.”

Viscount Roteschu snorted with a frown.

‘What on earth had happened to make her change so much while I was away?’

Although he hated Rashta, he considered her as sly as a fox, even though she was at times naive and clumsy. However, in the current Rashta he did not see that at all.

Instead of asking Rashta about what was going on, he hastened to tell what he had discovered,

“She is most likely the real daughter of the Isqua Family.”

“Evely! The mage who stays in the Southern Palace!”

Anger seeped into Rashta’s eyes, who seemed to have lost her spirit.

Rashta dropped the doll and grabbed Viscount Rostechu by the throat.

“Are you sure? You’re not doing this to make fun of Rashta?”

“Why would I make fun of you? What would I have to gain…?”

‘You are my source of money!’ Viscount Roteschu said inwardly to himself.

Why would he come to pass on this information when he was so busy trying to find Rivetti? Because Rashta was indeed his source of money and the future of his family.

However, it angered him that Rashta, who had to win the emperor’s heart to get money out of him, was not focused.

Finding Rivetti was all about money, money, and more money.

Rashta squeezed Viscount Roteschu’s neck, pushed him back, and muttered,

“I couldn’t do the test. In the temple they refused even though I got her blood. They say that the people involved to be tested must go personally. There have been so many irregularities, such as blood exchange, that nowadays no tests are done unless the people involved are present.”

Although Rashta said it with a smile, inside she was nervous.

“It can’t be true that the girl who used to call me sister is their real daughter.”

“Rashta, you can’t just say it’s false. You have to check it properly, even if it means forcibly taking her to the temple.”

“What’s the point of checking it out? You know it’s no use for me to try to check it!

Rashta, who shouted loudly, burst out laughing, pointed her finger at Viscount Roteschu and spoke sarcastically as if she understood his intentions.

“You’re lying to hurt Rashta, aren’t you? Isn’t it strange that you have found in a few weeks the daughter that Viscount and Viscountess Isqua couldn’t find for years? Yes. It’s a lie. It can’t be true.”

The corners of Rashta’s eyes began to redden. 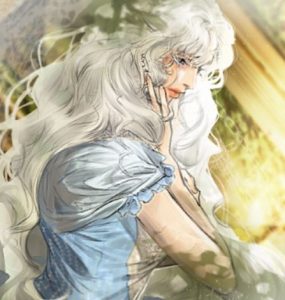 Despite her pitiful appearance, Viscount Roteschu had no time to worry about her now.

He stretched out his hand quickly.

“Give me some money. I have a very skilled informant, but he demands a lot of money.”

“You also send money to the mansion so Alan can stay well. He is raising your son.”

When Rashta removed the jeweled bracelet from her arm and handed it to him, Viscount Roteschu accepted it without hesitation. Then he turned away as if his business was over.

Once Viscount Roteschu came out from the bushes, he could hear behind him again, “My baby, hold mommy’s hand…”

Viscount Roteschu inexplicably got goosebumps, so he rubbed his arms.

“Has she really lost her mind?”

“The mana necklace was stolen?!”

“You have no idea who did it?”

“I was very attentive to security, but someone took it without a trace.”

Next to Marquis Karl, the court mage looked like he was on the verge of tears.

He had barely begun to investigate the one clue that was found to the phenomenon of mage decline. The necklace had disappeared, so he was very upset.

“They are able to control the birds.”

“What shall we do, Your Majesty?”

Sovieshu did not respond immediately, but instead looked at the court mage and asked,

“Clearly, it is very difficult to continue the investigation at this time. What can we do to reduce our damage right now?”

“Not for sure, but it will be better to stay away from mana stones for now.”

“Don’t mana stones make it easier to use magic?”

“That’s right. Even Miss Evely recovered her lost mana with the help of a mana stone. There have also been a few cases of sudden mana increase. However, my assistant lost his mana because of a mana stone. Since then, I kept him near the mana necklace, but the mana did not return…”

The court mage, who was saddened at the thought, managed to finish his words a moment later.

“We don’t know under what conditions mana disappears and increases, so it’s best to stay away from mana stones.”

“You’re right. We’ll do exactly as you say. Marquis Karl, also contact the magic academy to have them prevent their students from using mana stones in the meantime.”

Marquis Karl glanced for a moment at Sovieshu’s side of the desk as he left the office together with the court mage.

Emperor Sovieshu had not brought the princess for several days. Before, he had always tried to have her by his side. What made him change his mind?

He did not remove the cradle, but the empty cradle made it seem even stranger.

Once outside the office, the court mage asked as if he had a similar thought in mind.

“Doesn’t His Majesty take the princess with him of late?”

“The princess is still very small and sometimes cries, which must interfere with his work.”

The court mage asked this time in a dubious voice.

“Well, it’s normal for babies to cry. Is it not rather because of the news that Empress Navier is pregnant?”

Since very few people knew for sure that Sovieshu filed for divorce due to Navier’s infertility, the court mage nodded instantly,

However, Marquis Karl’s complexion turned darker. In fact, he was really worried that Sovieshu would stay away from the princess for that reason. And that worry was correct.

There, the princess slept peacefully in her comfortable crib.

Sovieshu waved her away and walked over to the crib. He looked at the sleeping baby’s face and gently touched her cheek.

The baby opened her eyes slowly, recognized his face, smiled sweetly and made some sounds.

With a wrenching pain in his chest, Sovieshu picked up the baby with a frown.

The baby only giggled lightly, tugging at Sovieshu’s cheeks and ears.

Sovieshu struggled to find a corner of the princess that looked like him as he let her play with his face.

But there wasn’t. The baby looked nothing like him.

There were only two people who looked like the baby. Rashta and her first child.

Sovieshu remembered Rashta’s first child, whom he had barely observed. It was his understanding that Viscount Roteschu was raising him.

‘I need to take a closer look at that child.’

To Sovieshu, that child was only Rashta’s first child, so when he saw the child for the first time he did not pay much attention to him even though he noticed his resemblance to Rashta.

After placing the baby in the crib, Sovieshu returned to his office and called a knight who acted in the shadows.