Once my parents and ladies-in-waiting calmed down a bit after the shock of my pregnancy news, I took a day off and went to visit Grand Duke Kapmen to deal with the magic issue.

I used magic twice unconsciously. Both times with bad results. The first time I froze Heinley’s hair, which was dangerous, and the second time I messed up the doorknob by freezing it.

So far, I hadn’t had any major problems because I had rarely touched other people directly, but once my child was born I would want to caress it. In the worst case scenario, I could freeze the baby, so I had to resolve this as soon as possible.

“Did you use magic?”

Grand Duke Kapmen asked with a puzzled expression upon hearing my words.

He couldn’t seem to believe it.

Certainly, it was rare for someone who never had any talent for magic to suddenly become a mage. Although there were cases of people who manifested as mages after adulthood, it wasn’t common.

“Yes. It was like ice. Maybe it’s water magic.”

“From freezing my heart to freezing everything around me, what can’t you do?”

“… Ignore the first half… the second too.”

“I know it’s hard on the Grand Duke.”

“I just hope that one day the effects of the potion will wear off.”

Fortunately, the awkward atmosphere slowly dissipated as we began to talk about magic.

Although Grand Duke Kapmen was off topic at times, he was one of the top graduates of the magical academy. When I told him about my past experiences, he immediately explained calmly.

“Of course. In fact, you’ll be able to control it naturally over time. That’s how it is in most cases.”

“I can’t wait for it to happen naturally.”

“I understand. You mentioned that both times the magic came out of nowhere, right?”

“Even when you can’t control mana, magic doesn’t come out of nowhere. You must have been driven by something you wanted to get or know.”

I remembered Heinley’s lovely head and the closed doorknob.

Grand Duke Kapmen moved his lips slightly as if he had read my thoughts. However, he seemed to refrain from saying, ‘You see,’ because it would be too obvious what he had done.

“I get what you mean. But if magic arises every time I’m interested in something, isn’t that a more serious problem…?”

“First, let me teach you how to distinguish the flow of mana. Magic has no rules, it’s related to instinct, so you have no choice but to feel the mana and control it by yourself.”

Once he finished speaking, Grand Duke Kapmen approached me and raised his hand. As if he wanted to grab my arm. However, he didn’t and hesitantly lowered his hand.

When I looked up wondering what was wrong with him, he muttered with an awkward expression.

His question was not easy to answer. I wouldn’t mind if it was someone else who was teaching me. But being Grand Duke Kapmen, it was a little uncomfortable…

As I hesitated, Grand Duke Kapmen sighed and said,

“Ask the Emperor, maybe he can do it too.”

“No. In my case, I learned it working as a teacher’s assistant when I was in the magical academy, usually no one pays attention to other people’s mana.”

Grand Duke Kapmen’s explanation was not a boast, but a fact.

I waited until lunchtime to go explain the situation to Heinley. I thought he might as well, but he waved his hand in a surprisingly tense manner.

“I wouldn’t have let you go to the academy alone if I could… If I tried I could do it, but I feel it’s dangerous.”

When our eyes met, Heinley averted her gaze and murmured,

What is wrong with him? He seemed to have some trauma related to this.

In the end, I decided to have Grand Duke Kapmen help me feel the mana in front of Heinley.

“Empress Navier, hold out your hand.”

Although Heinley didn’t know that the Grand Duke fell in love with me after drinking a potion, he couldn’t hide his unease when Grand Duke Kapmen grabbed my hand.

While I tried hard to pretend not to be aware of his expression, I turned my attention to my hand held by Grand Duke Kapmen.

“Please focus on the sensation going up along the length of your arm.”

It was hard for me to concentrate at first because I was worried about Heinley. But once I closed my eyes completely, I felt a tingling around the palm of my hand.

After a while, I felt it again. This time around my wrist.

It was a strange sensation. It was like a very faint electric shock. It wasn’t painful, but it was definitely felt.

“It’s because of the nature of my mana. Now I’ll put some more in.”

Just as I was about to nod to concentrate on my arm, someone suddenly pulled my hand away from Grand Duke Kapmen.

As soon as I opened my eyes in surprise, I saw Heinley in the middle of the Grand Duke and me with a flushed reddened face.

With one hand gripping mine and the other gripping Grand Duke Kapmen’s forearm.

Looking at him with a quizzical expression, Heinley said with a stiff smile.

“My Queen. I myself will learn it from the Grand Duke and do it.”

“It could relive your trauma…”

“Jealousy seems to suppress the trauma.”

Grand Duke Kapmen chuckled as if he had read his thoughts.

In any case, it was convenient for me. I preferred Heinley to do it, so I quietly stepped aside.

Heinley stood where I was a moment ago, the two of them hesitated and joined hands. 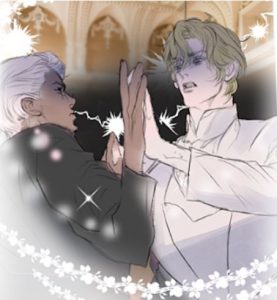 Wait… what the hell were they doing? I unconsciously bit my lower lip as I watched the scene.

It was very funny. Why did they both have that expression? It was a face of utter displeasure.

But I couldn’t laugh because they would both feel embarrassed, so I looked at them with a deadpan face.

Just then, the door burst open and McKenna ran in.

He had a very serious expression.

McKenna had permission to freely come and go from Heinley’s office. He seemed to have rushed in on urgent business…

As soon as he saw Heinley and Grand Duke Kapmen with their hands clasped together, McKenna was perplexed.

“Wait, what are you guys doing?”

His expression got even worse when he saw me standing off to the side.

“Empress, what are you looking at?”

“Why, why do our Emperor and the Grand Duke hold hands so amicably, and why does Your Majesty look at them so happily…”

When I stepped forward to try to fix the situation, McKenna said with narrowed eyes,

“Ah, of course, it’s because of the Empress. Well, the basics are bread and coffee, but if it’s coffee with milk so much the better.”

He spoke in a very solemn tone. However, what kind of metaphor was that?

“I don’t care what the three of you do by mutual agreement. But don’t ask me to play the role of jam.”

“Ah, this isn’t the important point.”

McKenna patted his own head before grimly exclaiming,