“That’s right. He won’t sit idly by while he thinks I’m to blame.”

“Even the time we had a problem with the Eastern Empire, everyone wanted to back down, but in the end we received an apology from Grand Duke Lilteang because the old Duke didn’t step back.”

“Oh, I really liked the old Duke back then. Especially when he roared, ‘Do you think because our country is small, our pride is small too..’?”

Heinley, who sighed and shook his head, soon smiled and spoke casually.

“Anyway, now that it’s come to this, we have to take advantage of his fierce temperament that only looks ahead and pounces.”

“It is necessary to make him more enraged so that he becomes openly hostile towards me, to the point where his close aides think, ‘Isn’t it dangerous to be on his side?'”

Being part of the Western Empire was above being a close aide to old Duke Zemensia.

“Why not blame him for some crime?”

“We need to let everyone see him go mad with their own eyes. Best not to intervene directly, McKenna.”

“I understand… but why are you giving me the will?”

“Send it to the old Duke. Offer him my sincere condolences.”

The unexpected news seemed to have shocked everyone. I sat on the couch in my room and looked at the flowerpot by the window. It was the flowerpot Christa had sent me.

I tried not to think about it too much, this kind of news is not good during pregnancy….

However, it kept coming to my mind.

While of course I didn’t like Christa, I wasn’t happy to hear that she had died. I would have preferred her to remain healthy in Compshire, filled with resentment.

I shook my head quickly to push thoughts of her away. Instead of staying seated, I walked around the room and out into the drawing room.

Fortunately, it worked. As I entered the drawing room, a new problem came to mind.

The problem was the cradle sent by the Ketron Family.

A cradle of the highest quality that placed me in a difficult position.

The cradle itself was magnificent, but since it was sent by Marquis Ketron, who had always been hostile, there were divided opinions on what to do. 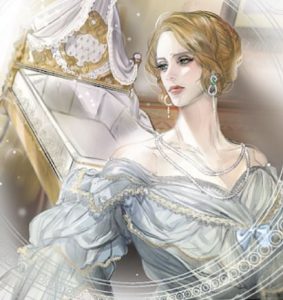 In fact, the drawing room was filled with gifts for the baby that the nobles sent every day.

At that moment, there was a knock at the door of the drawing room and a knight informed me of the arrival of Grand Duke Kapmen.

Was it because of the mana lesson? Heinley had strangely interrupted us while teaching me.

It seems that was not the case.

“I have something to report about the trade teams.”

This made me nervous. The time he came to see me like this was to tell me that a team had been detained in Whitemond.

I looked at him with concern. What happened this time?

However, what appeared on Grand Duke Kapmen’s lips was a bright smile.

“I received a message from one of the test trade teams!”

“It turned out great! The trip went great!”

Rashta considered Viscount Roteschu and the Isqua Family to be leeches sucking her money.

The situation became even more complicated now that her real father joined them.

“Yes, he is not in good health and needs money to cover medical expenses…”

Rashta wrapped both hands around her head.

The maid, whom Rashta sent to her real father to run errands, looked down as if she regretted her words.

However, the truth is that the maid was not at all regretful.

Rashta’s real father had become greedier when it came to getting money out of her, but he was quite generous to the people around him.

This maid was among those people.

“He was in good health a few days ago! What kind of medical expenses does he have?!”

“I don’t know. I’m just passing on his message.”

Eventually, Rashta took out a few jewels from her jewelry box and handed them to the maid.

Just then, Viscount Isqua and Viscountess Isqua came to visit her.

‘Are they here to ask for more money?’ Rashta was uneasy, but the couple didn’t seem to be here today for money.

“Is it true that His Majesty doesn’t want to let you see the princess?”

“You’re the mother, how can he not let you see the baby?!”

Seeing the couple worried about her, Rashta burst into tears.

It’s been a long time since anyone has comforted her, and when someone finally took her side, the tears overflowed as if a dam had collapsed.

After a long cry, Rashta sobbed and whispered,

“It’s all because of the future concubine, Evely.”

“She didn’t do anything directly. But if it weren’t for that girl, His Majesty would have no reason to suddenly turn away from Rashta.”

Rashta wept even harder in the Viscountess’ arms, and looked up slightly to examine their expressions.

Viscount and Viscountess Verdi talked about how ordinary Evely was. Far from considering that she might be their real daughter, they had faces of anger and rejection.

Rashta felt better. There didn’t seem to be an instinctive attraction to her through blood ties or anything like that.

But she couldn’t take it lightly.

Just as Viscount Roteschu had discovered about Evely, so could they.

Although they were now intoxicated by the glory of being ‘the Empress’ parents,’ fully immersed in high society, one never knows how long it will last.

“I don’t like that girl to stay in the imperial palace.”

That said, Rashta took out a handkerchief and wiped her eyes.

They hated Evely so much that they wouldn’t suddenly go for a paternity test.

However, she preferred to send Evely away as a precaution. Send her to a place where neither of them could find her.

The scenario would not be good if she took the initiative to throw Evely out. Even more so if the situation went awry and it was discovered that Evely was their real daughter.

So it was necessary for Viscount and Viscountess Isqua to throw Evely out on their own, in a fit of ‘extreme love’.

“Don’t worry, Rashta. It seems the girl is not a competent mage. Needless to say, you are the most beautiful. Sooner or later, His Majesty will lose interest in that mage.”

After they left, Rashta let out a deep sigh, went back to bed and lay on her stomach.

Once calm, she remembered that there was another urgent matter to attend to besides Evely’s.

Rashta opened the calendar to see how much time was left of the one-year deadline Sovieshu had promised her.

Yes, a deadline. She was a temporary Empress. In the time she had left, she had to win back Sovieshu’s heart and get her baby back.

Otherwise, she would never see her daughter again.

“Yes, a baby. Borrow a baby the same size as Rashta’s daughter. I’ll give you the money, just ask to borrow it for six hours a day.”

Arian was confused, but nodded and walked away.

‘I just have to practice holding a baby. Then I’ll be able to hold Glorym in my arms without dropping her. A teddy bear is not like a baby.’

Rashta patted her own cheeks and shook her shoulders.

‘No matter how difficult a situation is, Rashta always pulls through. This time, Rashta has to pull through too.’

She had to find a way to deal with Evely, get her daughter back, win back Sovieshu’s heart, handle her real father, and take care of the journalist.

The journalist was getting so much attention that it was hard to deal with him right now, but there had to be a way. That was for sure.

Arian, who had gone out, came back in and reported.

“A young man named Alan wants to see Your Majesty.”

Rashta jumped to her feet and almost screamed, ‘Has he gone mad?’ However, Arian’s next words drowned out the scream.

“He brings a child.”

At first, she was so stunned that she couldn’t speak.

She had a strong urge to order her to get him out immediately. But Rashta soon changed her mind. On second thought, it might be a good thing. She needed a baby to practice on. Wasn’t this the child that caused her trauma?

Her first child looked a lot like the princess, so wouldn’t it be better to practice with this child?

Moments later, Alan appeared with a small child in his arms, whose face was practically hidden by blankets and a big hat.

Rashta closed the door to the drawing room after ordering no one to enter, and looked disdainfully at Alan.

She let him in because she thought he would be useful because he came with the little child, but she couldn’t stand it when she saw him.

“How shameless. Why did you come here?”

“Is Rashta a friend of yours? Call me Your Majesty.”

“I had some business to attend to at the Imperial Palace, so I decided to take the opportunity to stop by so you could see your son…”

Alan spoke hesitantly. Rashta then looked disdainfully back at his apparently innocent expression and held out her hands.

Alan nervously removed his hat and handed his son to Rashta.

Rashta held the baby with both hands and looked at his face. Even though she knew it, she felt strange to see a face so similar to the princess’. But because of the age difference, her first child had more defined features.

Rashta, who spoke coldly, turned her attention back to the little child’s face.

For some reason, she felt a little tingle in her heart. Cold sweat ran down her back and her arms were tense.

Alan looked stunned at her touched expression and opened his mouth.

“I actually came to tell you something, Rashta.”

“I told you not to address me that way.”

“Rashta. Ahn is also your child.”

Rashta, who frowned at Alan’s lack of etiquette, suddenly recomposed her expression as she had a bad feeling.

“Ahn is also your child. Rashta, my Ahn is also the empress’ child, isn’t it too pitiful that he lives like a bastard child?”

“Doesn’t he at least deserve to be treated like a quasi-prince?”

Alan smiled broadly with an expectant, hopeful look, as if he were in a dream.

“In the past… you used to be a slave with no chance to help your child, but not anymore. So there’s no need to hide it, right? It would be wretched if Ahn had to live like a bastard while his younger sister lived like a princess.”