Leaning against a tree trunk, Rashta recalled the conversation she had with Marquis Karl an hour ago.

“You must be more careful with your actions, Your Majesty.”

“What did Rashta do? Currently everyone picks on me, so I can’t do anything.”

“Yes. I met with him. Duke Elgy is the only one who cares for Rashta and isn’t swayed by rumors. Rashta can’t even see a friend?”

“Your Majesty. In today’s newspapers, even in the commoners’ newspaper, there was an article in which it is stated that the Empress and Duke Elgy have frequent meetings alone.”

“Marquis Karl, Rashta also read it. The journalist who wrote that article is Joanson. He always speaks ill of Rashta!”

“His Majesty does not comfort Rashta. Can’t Rashta seek comfort from someone else?”

“Not in your position.”

“You lie. The Empress of the Eastern Empire can even have lovers. It’s unbelievable that Rashta can’t meet a friend in such a country. It makes no sense.”

Rashta clenched her fist and banged her head against the tree.

Rashta believed that she had done nothing wrong. If he had not brought another concubine, if he had not taken her away from her daughter, and if he had not treated her coldly, there would be no whispers.

‘My friendship with Duke Elgy remained the same as before. Isn’t it strange that false rumors were spread as soon as I lost Sovieshu’s favor?’

So for her it was Emperor Sovieshu’s fault.

‘Joanson… I must find a way to deal with that journalist…’

Joanson, who wrote bad articles about her, also posed a problem for her.

That journalist talked about the secret meetings between Rashta and Duke Elgy, pretending to be on her side and stated that he could not believe it. He then wrote an article about the princess.

On the surface, he showered praise on the princess, but the problem was the first sentence of the article.

— The Princess was born prematurely, but she is a healthy baby girl.

After reading the article about the empress’ secret meetings, the fact that the princess had been born prematurely would raise suspicions.

It was clear that Joanson had truly dark intentions.

The more she tried to come to her senses, the worse the situation got, and the stronger the pressure in her chest became.

Rashta pounded her fist against her chest.

Her fake parents, her real father, and Viscount Roteschu, often took money from her. Viscountess Verdi, who was her closest aide, had betrayed her. She could not see the princess’ face, and the demented Alan asked her to make his son a quasi-prince.

This was stressful enough. However, it didn’t even end there.

A journalist named Joanson used to write malicious articles about her as revenge for the disappearance of his younger sister, Sovieshu treated her coldly since he fell in love with another woman, and it was very likely that the wicked woman who took her husband from her was the real daughter of her fake parents.

They approached her from all directions, reaching out their hands to squeeze her neck.

Just then, she overheard a group of nobles chatting as they took a stroll.

Rashta hurriedly hid. She had no reason to hide, but did so reflexively now after she would receive only criticism from people.

However, these nobles unexpectedly spoke favorably of Rashta.

“… At that point I told her to get the hell out of here. That girl named Evely made a furious look and insulted us. She said that if our lost daughter, who grew up as an orphan, met people like us, she must have suffered a lot…”

“Oh my! How could she say such ugly words to parents who have lost a daughter?!”

“Then I told her she was a harlot, that my daughter would never get involved with a married man. This made her very upset.”

“She seems nice at first glance. But that girl is too arrogant.”

“She’s not polite. She has no etiquette. She doesn’t even know her position.”

“Not really. Let’s all look at Rashta. She was so pure and kind even when she didn’t know her parents were nobles.”

“Well, that’s true. Back then, Her Majesty really did look like a bright wildflower.”

‘The Viscount and Viscountess Isqua have made other nobles speak well of me.’

Although they also took money from her, they were the only ones who gave it back.

The couple, who finished their speech about how pure and kind Rashta was, now insisted that Sovieshu should take better care of Rashta.

Rashta listened to the conversation happily as she was hidden in the bushes.

Sleep began to overtake her as the praise she had not heard in quite some time went on.

But she was completely awakened by the name that came up soon after.

“Are you going to the banquet to celebrate Navier’s pregnancy?” 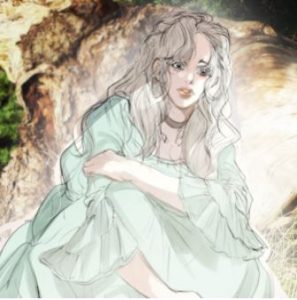 “I don’t know yet. I might make a little trip because I had a good relationship with Navier.”

“There was a rumor that the reason the Emperor divorced Navier was probably because of her infertility. In the end it was just a false rumor.”

“There are many false rumors. Wasn’t Emperor Heinley said to be a famous playboy? If it were true, would he be so attentive to Navier?”

Her heart raced in a different sense than before. Her whole body began to itch as an unpleasant feeling came over her.

After learning that Sovieshu suspected Navier’s infertility, Rashta fully believed it. She was convinced that Navier was infertile.

‘How could she be pregnant? Besides, did she have a good relationship with Emperor Heinley? This… this is absurd. It makes no sense.’

Inside her clenched fist, fingernails dug into her flesh. The tip of her nose burned with resentment.

“Why am I suffering so much? Did she dump everything bad in her life on me and leave to make a happy home?’

Rashta couldn’t even see her daughter’s face, while Navier was happily pregnant.

‘Actually, Rashta was the woman Prince Heinley fell in love with first.’