The day of the banquet had arrived.

To separate it as much as possible from Heinley’s birthday, the banquet to celebrate my pregnancy had to be held on short notice.

On each invitation was also added the message, ‘We hope to see you again soon, so do not feel pressured to come on this occasion.’

Due to the short notice, it was not possible to get a response from the guests, so it was not known who would come.

Of course, I assumed that all the nearby nobles would come, but not many foreign guests.

But as soon as they started to enter the hall, there were, surprisingly, many foreign guests. People I missed also came, one of whom was Marquis Farang.

“It’s a little strange to see you here.”

Marquis Farang joked and hugged my brother. As I approached he said with a complicated expression,

“Your Majesty, how have you been?”

“Fine. Thanks to His Majesty Heinley’s care. How have you been?”

“I have felt lonely since Your Majesty Navier, who cared for me, left.”

Hearing the depressed Marquis Farang, my brother looked at him with a deadpan expression. Marquis Farang pretended to be extremely embarrassed, and hastily covered his mouth.

But soon he acted as if he was annoyed, spread his fingers slightly apart and spoke between them.

“Did I say something wrong?”

“I don’t want you to joke so friendly with my sister.”

“I don’t want you to act like you’re too close to my sister.”

“Huh? Are you jealous? You don’t want to lose me, right?”

“Why don’t you just shut your mouth?”

Once Marquis Farang fell silent again, my brother laughed and put a hand on his shoulder.

Seeing the two of them joking and having fun for the first time in a long time, I naturally smiled. My brother looked very happy to be reunited with Marquis Farang.

Looking over at Heinley, he seemed to be having a good time with Duke Elgy. The two were separated from the rest, talking quietly.

Oh. In the middle of the conversation, Heinley suddenly pressed Duke Elgy’s cheeks when he frowned. Duke Elgy’s mouth had turned into that of a fish. 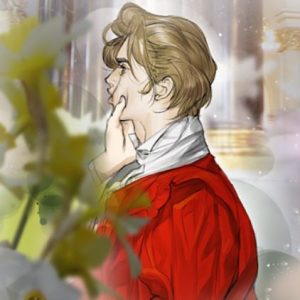 As I stared quizzically at the shape of his mouth, Heinley told him to smile. Once the Duke smiled reluctantly, Heinley lowered his hand.

… What were they talking about?

“Why hasn’t Your Majesty done anything lately? I feel like I’m doing the work alone.”

“What are you saying, Elgy? You don’t even do the work directly.”

“Even so, I do more than Your Majesty. Why don’t you help at all now?”

“Is it because of Empress Navier?”

At Duke Elgy’s question, Heinley looked over at Navier in silence. Not far away, she was surrounded by friends from the Eastern Empire.

As he intently watched Navier’s neck that moved slightly each time she laughed, the beautiful strands of her hair that swayed with each gesture, the bright smile that occasionally appeared, and her eyes that repeatedly curved into a crescent shape, Heinley whispered.

“After all, it is My Queen’s home country.”

“Realistically, it would not be easy to win a life-and-death war against the Eastern Empire. Even if we were to win, we would not be able to destroy it. Although we can reduce the number of mages that will emerge in the future, the same is not true for the number of current powerful mages. Even this has been hindered, so it’s not as effective as before.”

“Wasn’t your goal the conquest of the Eastern Empire?”

“No matter what the reason for the war, if the Eastern Empire is not completely destroyed, there will be records. Historians will say that My Queen, who became the Empress of the neighboring country, plunged her home country into the war for revenge. In fact, all countries will say the same, except the Western Empire.”

“I do not want My Queen to receive such a stigma.”

As Heinley pretended to rub the corners of his lips with his fingers, Duke Elgy flashed a smile and said with a raised eyebrow,

“So, have you decided to quit?”

“Do you intend to go ahead?”

“There’s no reason to quit now.”

Duke Elgy’s determined gaze shifted to the front door, where there was no one.

As soon as he finished speaking, a woman in a white dress that swayed as she walked entered the front door.

The white dress sparkled under the chandelier light.

The official in charge of announcing the entrance of the guests named Rashta in a loud voice.

Just then, the corners of Duke Elgy’s lips turned up.

“The time is coming to reap the fruits.”

I was chatting with Princess Soju from the Southern Kingdom who unexpectedly came all the way here.

Princess Soju and Mastas communicated surprisingly well with each other, the things they said were so funny that I couldn’t stop laughing with my hands on my belly. Suddenly, Princess Soju averted her gaze and murmured as she placed her hand on her forehead.

“I thought she wouldn’t dare come.”

As I followed her gaze, I saw Rashta enter the hall. Her eyes immediately shifted to me. However, it wasn’t just that.

As soon as she saw me, she approached without hesitation. Once she stopped in front of me, Rashta smiled broadly and opened her mouth to speak.