“The Empress of the Eastern Empire says very strange things. None of that would have happened.”

“Even if Your Majesty Heinley doesn’t want to admit it. In fact, it is the truth.”

“Oh. Since when is an assumption the truth?”

“Because you always have such a wicked sense of humor with Rashta.”

“Rashta just talks about the old days, what’s wrong with that?”

Why wasn’t Heinley as blunt as usual? Why did he allow her to continue to talk nonsense?

“Don’t you remember the letters, Your Majesty?”

Ah. It’s because of the letters.

He seemed not to speak firmly to Rashta for fear that she would talk about the letters we had exchanged in the past.

If it became known that I had exchanged letters with Heinley before the divorce, my enemies would be the ones who would be most happy.

They would accuse me of having had an affair with Heinley, and emphasize that the divorce was not Sovieshu’s fault but mine.

After Christa’s death, the position of those who followed her fell drastically. Although in the Western Empire, it wouldn’t do me much harm to hear a rumor that I had an affair with Heinley, they might cling to that.

Heinley pressed his temples as he heard about the letters. This time Grand Duke Lilteang intervened and said that Heinley really liked Rashta.

Heinley sighed as he looked at Rashta. He had the face of a person without a plan and seemed to be thinking about what to say in this situation.

“When did you start to be interested in this?”

“At first you weren’t interested at all in nobility, gossip, and so on.”

“Huh? Won’t you really tell me? That’s mean, I thought we were friends, huh?”

“I was always interested, but not enough to write articles about it.”

Despite the clear annoyance in his voice, his colleague did not leave his side and asked another question,

“But how did an interest you kept quiet suddenly become so definite? How?”

“Why are you so curious?”

“Everyone is, not just me!”

His colleague exclaimed with a twinkle in his eye.

“It’s surprising that you suddenly revealed such an interest in nobility, high society parties, gossip, and so on… but what’s more surprising is that you spread all kinds of rumors as soon as you revealed that interest. You are now the most famous journalist in the Eastern Empire. Don’t you know that?”

His colleague’s words were true.

When Joanson began to smear Empress Rashta, not many agreed with him. It was the same when he began to raise suspicions about her.

However, the situation had changed. Newspapers in which Joanson wrote about Empress Rashta were now sold like hotcakes.

He had become one of the most popular journalists. People’s anger towards Empress Rashta increased with each of his articles.

“Are you really not going to tell me how you got it?”

“A high-status noble provides me with the information.”

“Do you trust that person?”, His colleague asked bitterly, “Do you know that many of the nobles are not to be trusted? Is that noble any different?”

Joanson lifted one corner of his mouth.

“I don’t trust that person either.”

‘How can you write such delicate articles if you don’t trust that person?’

For commoner journalists who could not attend high society parties in person, the gossip of the nobles was a risky subject to broach.

‘Besides, how could he get such valuable information from a high-status noble he didn’t trust…?’

The bewilderment on his colleague’s face made Joanson laugh.

“Don’t worry. I don’t trust the high-status noble who provides me with the information, but I’m sure that noble detests the same person I do.”

“Who is that noble?”

Instead of answering, Joanson stood up and asked,

“Will Empress Rashta return to the empire this afternoon?”

It was around 3 o’clock in the afternoon when Rashta returned to the Eastern Empire.

She was quite satisfied with her visit to the Western Empire, so she hummed happily in the carriage. It had been a long time since she had felt so good.

Although she went through some troubles, it was nothing compared to what she had suffered in the Eastern Empire. To the point that she didn’t mind.

‘I can understand that Emperor Heinley is no longer in love with me.’

It was not such a surprise as to disturb her joy.

‘I deserve it because I was the one who rejected him first.’

Rashta even considered the confrontation with the Empress insignificant.

She found it unpleasant to argue face to face with her, and hated to see Navier being congratulated by everyone, but those feelings were only momentary.

The polite attitude of the people of the Western Empire toward the Empress of the Eastern Empire made her so happy as to overshadow those annoyances.

Ever since it was discovered that she had used Navier’s promissory notes on her behalf, ever since a journalist named Joanson began to tarnish her reputation, and ever since her daughter was taken away by Sovieshu, she had not felt so respected.

‘I tried to see Glorym a few more times. Still, His Majesty refused to show me my daughter. Wouldn’t it be better if I stayed in the Western Empire?’

As the carriage entered the suffocating Imperial Palace, Rashta thought with regret.

‘Come to think of it, it might be a good idea. Wouldn’t it be better to be treated as a distinguished guest than to be a forgotten empress here?’

Eventually, the carriage entered the garden of the Western Palace.

‘But does that mean that His Majesty Sovieshu will be free to see other women? I don’t like that.’

Her excitement faded as she saw the familiar garden. Her flushed cheeks regained their color and the tingling inside her also disappeared completely.

Rashta quickly became depressed and grabbed at the carriage curtains. This feeling was intensified when he saw Alan at the entrance of the Western Palace. He held Ahn in his arms like a weapon.

‘Why is he here? Did he come again to make the absurd demand that his son be treated as a quasi-prince?’

She had already given him a severe written warning.

‘Did he forget my words?’ Rashta thought angrily.

The carriage stopped near the entrance as Rashta watched Ahn and Alan through the window.

Alan, who had his eyes on the carriage, held his son more firmly as if he had realized who was inside.

From the first moment Rashta saw his face, she felt really uncomfortable. In contrast, Alan’s expression brightened just at the thought of Rashta riding in that carriage.

If she were to walk away after seeing them, it would cause strange rumors. She had to move on with dignity.

Once Rashta got out of the carriage, she approached Alan and asked him in a low voice.

“What are you doing here?”

Alan did not finish his words and hugged his son to his chest. Fortunately, this time the child wasn’t crying, so he didn’t attract as much attention from the people around.

Rashta couldn’t throw him out, so she hurriedly walked ahead. However, she stopped after a few steps when she heard a screech sound from above.

When she looked up, she saw a large bird that seemed to be used as a carrier pigeon. It had a letter tied around its leg, but Rashta lowered her head again. She had no relation to this large bird.

‘Now what’s important is to send Alan back as soon as possible.’

Rashta walked once again to enter the West Palace first. Just at the moment Alan was about to follow her with the little child in his arms, the long bird, which seemed tame as it scratched its fur, suddenly swooped down.

Startled, Alan waved his free hand. But the bird wasn’t frightened, spread its wings and swooped down faster.

Ahn was scared, so he clung to his father. The large bird brushed past the little child. After a moment of commotion, the bird immediately flew away to another place.

Rashta was startled when she turned her head, 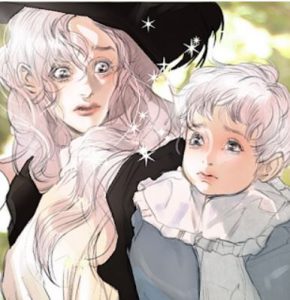 The hat that covered the child’s head rolled on the ground as if it had been hit by the bird’s wings or legs.

Rashta hurried to run to the hat. By the time she reached out to grab the hat, the attention of the people around had already focused on little Ahn.