Once I asked him curiously, his expression turned serious.

“It was foolish, Your Majesty. Please forgive my impoliteness. I came here because Miss Evely had strange thoughts.”

“I want to hide this ability as much as possible because you might be afraid of me, but I still tell everything to my beautiful ice that I can’t get close to… ah, I’m sorry. The Eastern Empire suspects the Western Empire attacked their mages.”

Due to Grand Duke Kapmen’s incoherent words, I did not immediately understand the relevance of what he said.

After about thirty seconds, I asked in surprise.

Instantly, I remembered the order given by Heinley to McKenna and the dean of the magical academy’s attitude towards me.

It seemed that Evely had indeed regained her mana, but she tried to hide that fact from me.

Grand Duke Kapmen added as he stared at me,

“They lost the conclusive evidence in the middle of the investigation, so the matter will not be made public.”

For a moment, I thought these words had been just to reassure me after he read my thoughts.

My legs weakened at once, so I sat down on the couch. My heartbeat quickened and my expression darkened.

I had tried to pretend not to notice the situation, but it had already come to this point…

Grand Duke Kapmen didn’t think it would turn out this way, so he hesitated and put his hand to his forehead.

“Shouldn’t I have said it?”

“Don’t worry. Thanks for letting me know.”

It wasn’t Grand Duke Kapmen’s fault. He was surprised to learn that the Eastern Empire’s mages suspected that the Western Empire was mainly responsible for the phenomenon of mage decline, so he came to inform me.

After Grand Duke Kapmen left, I remained sitting on the couch.

I felt as if my mind was flying through the dark evening sky. When I came to my senses, Heinley knocked on the door.

I spoke weakly. I didn’t have the strength to get up, so I leaned back on the couch and closed my eyes.

I didn’t even have an appetite. No matter how many delicious dishes Heinley prepared, I didn’t want to eat today.

Should I ask Heinley directly about the phenomenon of mage decline? Even if it came out of his mouth that he wanted to harm my country?

I felt a heavy pressure in my chest, until Heinley’s voice reached my ears.

When Duke Elgy brought in the fake parents, he advised Rashta never to agree to a paternity test.

Naturally, if she were to take a paternity test, it would quickly be discovered that they were fake parents.

Recently, the controversy over her fake parents had been raised by the appearance of her real father. So Rashta took Duke Elgy’s advice and insisted that she would not take a paternity test.

It was as if she had put on a blindfold, but there were people who understood Rashta at the time.

It could be considered a humiliation to take a paternity test. One would prefer to resolve the matter without this method as much as possible, especially nobles.

“Isn’t it suspicious that she refuses a paternity test?”

“Does that mean her daughter is not a princess but an illegitimate child?”

“Oh my! It would be terrible if the Emperor’s only descendant turned out not to be!”

There were many ladies in other noble families who had been raised to become the next empress, while Rashta had no one to back her up.

The only one who could help her was Viscount Roteschu. But the Viscount was in search of Rivetti, so she had not seen him at all.

If he didn’t send letters or people to ask for money periodically, it would be impossible to know if he was still alive.

Rashta paced back and forth across the room with heavy footsteps.

If she were to take a paternity test, it would be discovered that she was not of nobility.

Although she would no longer be able to make her daughter the Emperor’s successor, several empresses who preceded her had also been of commoner origin.

Rashta unconsciously tugged at her hair. She rubbed her scalp roughly and crumpled to the floor.

She was too scared and worried to bear it.

Although she could not take a paternity test, the more time passed, the more doubts there were about the real father of the princess.

She could not even turn to Duke Elgy in this situation. Clearly, if she were to visit Duke Elgy, who had been embroiled in several scandals, it would only add to the rumors.

After a long reflection, Rashta came to a conclusion.

The only reason she couldn’t agree to take a paternity test was because of her real father and her fake parents.

Although people might find it strange that they disappeared at the same time, if the Isqua Family and her real father disappeared, it would be impossible to know the truth.

Once she came to this conclusion, Rashta waited first to hear from her real father. He used to send her maid to ask for money, and it was time for her to come.

If she contacted her real father first, he might find it suspicious. So she had to wait for him to approach first, as usual.

Of course, she was a little worried. However, her real father sent the maid despite the recent rumors about Rashta.

“Greetings, Your Majesty. Here you are…”

As soon as Rashta received the letter from the maid’s hands, she involuntarily shed tears. This had taken a load off her mind.

She was undoubtedly worried about what might happen if her real father acted differently this time. However, he acted as he always did.

‘Why do I feel such strong pain in my chest?’

As Rashta shed tears, the maid asked in surprise.

“Are you all right?”

Rashta held back the urge to scream. She just glared fiercely at the maid with her wide eyes. She gave an eerie impression like that of a sea monster in the depths of the ocean.

The maid flinched, so she lowered her gaze. Rashta bit her lower lip and ordered the maid to leave her alone.

Finally, she opened the envelope after taking a deep breath. As she pulled out the letter, an unwanted hope rose within her again.

‘This time. Maybe this time he wanted to behave like a good father.’

She was annoyed with herself for having that hope, but it was how she felt.

Rashta pulled out the letter and read it quickly. ‘I need money for this… I also want to do this…’ he asked for the same as always.

He didn’t even bother to write her words of comfort. He only mentioned how difficult these days were for him. However, the amount requested was higher than usual. Not that he was completely unaware of the rumors, but that he only cared about the money.

Tears streamed down her face.

Rashta tossed the letter aside, squatted on the floor and covered her face with both hands.

Then she touched her fingertips to the scar on her forehead, which had been caused by a maid in the past.

No matter how much she covered it with her bangs, the scar was still there, and it bothered her a lot. Rashta scratched the scar with her fingernails as she thought.

‘Why was I born a slave? Why did I have to be the daughter of that trash? Why was Navier born a noble? Why did Navier have loving parents and live happily?’

She knew that Navier must have gone through some hard times too, but not as hard as hers.

It was different from the start. Rashta had to fight because she had nothing.

She wanted someone who truly loved her, not a father who abandoned his daughter, nor a man who promised her love and did not protect her.
To love and be loved completely. Without being discriminated against for being a slave.

Rashta had always been unhappy as to say now that she was suffering because she took away Navier’s position as empress.

Rather this time she tried to change her unhappy life with her own hands. But her unhappiness became even greater.

‘Why? Why are happy people always happy, and why are unhappy people always unhappy? Do I find myself unhappy that I didn’t settle for my life? What would have happened if I had conformed? Was I supposed to live my whole life as an obedient slave in the hope that one day my father would come to rescue me?’

Rashta sobbed and pounded her fist on the carpet.

Each time her fist hit the carpet, the more the splendid ring on her right hand sank into her flesh.

Blood flowed down her hand, but she felt no pain.

She felt as if the splendid ring bit into her flesh and whispered,

‘This position is not for you. You don’t fit in such a high position. You are not worthy of me.’ 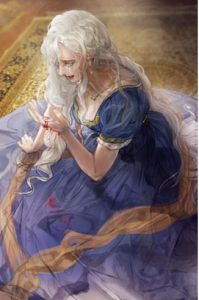 As tears streamed down her cheeks, Rashta suddenly stopped crying.

She had changed her mind.