Although I had done nothing wrong, as soon as Heinley asked me about the box, I immediately answered, “It’s nothing.”

Heinley didn’t question my words, he walked over to me and kissed me on the cheek.

“So then why do you look so uneasy? Huh?”

I couldn’t help but sigh. ‘Should I tell him about the box sent by Sovieshu first, or should I ask him about ‘it’ that I was trying to ignore?’

“From your expression, it doesn’t seem like you were thinking of anything happy…”

Heinley stared at me as he leaned toward me. He was right, so I nodded,

“I have two things to tell you.”

“Were you thinking about whether you should say them?”

“No, I was thinking which to say first.”

I needed to say both. So after thinking about it, I decided to start with the most important.

With the box that Sovieshu gave me, I was only worried that Heinley would get jealous. So it was more important to resolve the matter of the phenomenon of mage decline.

Heinley whispered with a hand on his chin.

“Are you involved in the phenomenon of mage decline?”

As I was about to say, ‘Are you the culprit?’ I chose my words better.

To call him ‘culprit’ in this situation would be to treat him as if he were a bad person.

Of course, if he really was involved with the phenomenon of mage decline, he had already affected hundreds of people… Heinley would be a bad person to them.

In the blink of an eye, Heinley’s face became as cold as if it was covered by a thin layer of ice.

He spoke to me in a stiff voice. His eyes, less warm than usual, fixed on me.

His icy appearance, without even trying to disguise it, made him seem colder than I could have expected.

Not that he was angry with me. It’s just that at my one question, his lovable and kind mask that he always wore disappeared.

It broke my heart to see his stiff expression, not even trying to excuse himself.

I called to him again, and placed a hand on his cheek.

I called his name a third time and kissed his upper lip lightly. 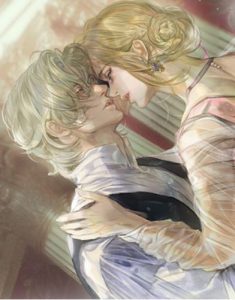 Only then did Heinley’s eyes tremble. His golden lashes rose and fell over his purple eyes.

When Heinley looked down, his purple eyes were completely hidden.

“Heinley. I just want you to be honest with me.”

The room was completely silent, only the ticking of the wall clock could be heard. As if reality had faded away and there were only the two of us left in this world.

I felt that no matter what Heinley said at this point, I would accept it without hesitation. When Heinley slowly looked up, his hidden eyes were revealed again.

As soon as he called my name, the atmosphere enveloped in a magical and wonderful silence was instantly broken.

Reality dragged us back into the room. Suddenly, the tension awakened a fear in me that made me shudder.

Heinley first merely answered my question. Then he put his hand over mine, which was on his cheek, and immediately explained.

“Mages are the pillars that have made the Eastern Empire the most powerful country, they are the strength of the Emperor himself. It is true that I have harmed the mages as a way to suppress the Eastern Empire. But not any more.”

Heinley looked at me in fear.

“My Queen, I married you who are of the Eastern Empire. It is for you that I do not intend to start a war against that empire. I mean it.”

There was no need to finish the question, Heinley confessed on his own,

“It’s true that she lost her mana because she got caught up in my plans. But I was also the one who returned her mana. For your sake, My Queen. Because it was painful for you to see that girl like that.”

Different emotions arose in me at the same time. Feelings so mixed that it was hard to distinguish between them.

I licked my lips, cupped his face in my hands and rested my forehead against his.

In the midst of all this complexity, there were two clear feelings for me.

As I promised myself before, I could not stop Heinley without a good reason just because he had plans to start a war against the Eastern Empire. Still, I would not like it. My husband would attack my country, my family and my friends.

Fortunately, Heinley said that for my sake he would not start a war against the Eastern Empire. Although it seemed that he had planned it for a long time, he gave up for my sake.

I was grateful to him, but I was sorry that his image as Emperor of the Western Empire would be affected because of me.

Still, I couldn’t say, ‘Don’t worry, attack my country and my family.’

Of course, in a corner of my mind also hovered the thought that if we had not married, we would have become enemies.

Heinley called me again. He seemed frightened because I stood still without saying a word.

I had to say something, but what?

I searched through the various thoughts going through my head, and chose one. The one most appropriate for this moment.

“Thank you for thinking of me.”

I whispered in his ear.