The box Heinley chose contained the sexy underwear. I had hesitated to put it among the gifts, but in the end I was swayed by desire. Since Heinley is a naughty eagle I thought he would like it too, so I partly did it for fun.

However, I had put it on the bottom as it would be less likely that he would choose it. When he chose that box, I regretted my folly.

“Heinley, choose another one.”

“I just realized I made a mistake. This is not a gift for you.”

Heinley had an expression that he didn’t believe me in the least. It was understandable. He couldn’t believe that I had put a gift for Viscount Langdel next to his birthday gifts. It was an absurd excuse.

In any case, I hurriedly snatched the box from him, shoved it under the bed and said again,

At times like this, I was glad that my expression was impassive. It was impossible to tell that I was embarrassed.

“Are you going to take away the next gift box I choose?”

“No. I definitely won’t do it again.”

Heinley looked at me with dubious eyes for a moment, but chose another gift box. It was a beautiful shiny gift box wrapped in gold and silver paper… but how did he manage to choose this one too.

This was McKenna’s recommended gift. Do the Heinley dance with him!

No, I don’t blame Heinley. I was foolish to agree to what McKenna said even though it seemed crazy to me.

Inwardly, I reproached myself. Heinley is a funny man with a great sense of humor, so I wanted to match him. But why did I try to do it now even though I knew I wasn’t good at jokes?

In fact, what I had in mind was for Heinley to first choose a ‘normal’ gift, then I would tell him that he could keep the others as well.

In that way, I expected Heinley to say, ‘My Queen, you have a great sense of humor!’ However…. 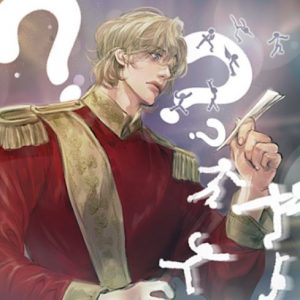 While I was deep in thought, Heinley took out of the gift box the drawing of a human form doing dance steps and asked me sadly,

“Is this the losing gift?”

I guess he asks because it’s not a good drawing. It’s a drawing I did roughly to represent the ‘dance’.

It seems that wasn’t a good idea.

“Oh, My Queen! You are very creative with your drawings! In about 300 years, this drawing will be recognized as a work of art!”

“… I know I don’t draw well. You can choose another gift box—”

“Give it to me anyway. I’ll give you the first gift you chose.”

I snatched the drawing from him, took out the box I had put under the bed and handed it to him.

Heinley muttered. He seemed to be very curious about the first gift he had chosen, so he hurried to open the box.

Immediately a gasp was heard.

“My Queen. Did you want to give this to Viscount Langdel?”

Heinley seemed to get it, so he didn’t stop teasing me no matter how many times I said otherwise, “Why this gift?”, Viscount Langdel likes this?”, “Why did you put a gift for Viscount Langdel with my gifts, My Queen?”, “Besides, what did that drawing mean, My Queen?”

Only when the wine glass in my hand began to freeze did Heinley shut his mouth.

What I had in mind didn’t work, so now that Heinley had chosen the two gifts I had prepared as a joke, I gave him all the others.

I also realized that this kind of prank could not be made by just anyone. When a person as rigid as me tried to make a prank, I ended up becoming the butt of it…

After we spent almost two hours opening the other gifts while laughing, I finally talked about the Whitemond issue,

“Heinley, I have something important to tell you about Whitemond.”

“My Queen. That’s not a pleasant subject.”

“I must tell you while my memories still remain clear.”

I patted the back of Heinley’s hand because he kept stroking my toes as if he wanted to have a little more fun. After he sat up straight, I told him about what happened in the hall.

I told him about what the special ambassador asked me to do, the gift he gave me, and the advice I gave him.

Heinley listened to me with a serious expression. Then he asked me as soon as I finished speaking,

“How would My Queen like this to be resolved?”

“My Queen is a pacifist?”

“It would be foolish to promote peace unconditionally. But I think it is better to avoid war as much as possible if there is no clear justification or rationale. It is not right to drag countless people to their deaths just for a small gain.”

“The Western Empire is powerful, My Queen. It would not be a problem to forcibly take control of the port of Whitemond.”

“After we proclaimed ourselves an Empire, Whitemond is not the only nearby country that looks at us warily, Heinley. If we attack Whitemond for immediate gain, all other countries would distrust the Western Empire and try to keep their distance. They could also join forces with the Eastern Empire in the event of a war.”

Heinley nodded repeatedly as he listened to me. From his expression, he seemed to seriously ponder my point of view.
“I’m not saying this because of the gift of the two ships.”

“A merchant ship and a warship.”

In fact, it was the first time that I received ships as a gift.

“Would you like me to show them to you?”

Since Heinley was interested, I quickly went for the envelope given to me by the special ambassador and handed the paintings of the ships to Heinley.

“What do you think?”

Heinley was taken aback for a moment.