Unlike the Imperial Family of the Eastern Empire, which was as calm as if it was on the eve of a storm, the Zemensia Family, of the Western Empire, was right in the midst of one.

It all started with the argument between Duke Zemensia and the Old Duke.

“Father, Emperor Heinley immediately avenged Middelen. For your grandson, Emperor Heinley locked up Grand Duke Lilteang in a tower, willing to go face to face with the Emperor of the Eastern Empire.”

“What do you mean by that?”

“Christa is already dead. She died of her own fault. If Christa had gone quietly to Compshire from the start, you, my wife, my children and I would be as well as ever.”

A fire appeared in the Old Duke’s eyes when his son spoke ill of his dead sister.

Duke Zemensia said what he felt even though he knew his father would not like it.

“It is a pity that she died, but what matters most are those who are alive. We need to put aside the grudges over Christa’s death and board the new ship, father.”

“Empress Navier is already pregnant. Finally the Imperial Family has a direct successor. Even the nobles who did not look favorably on Empress Navier now bow to her.”

The Duchess, who had remained seated quietly at his side, also added,

“That’s true. Everyone who approaches Empress Navier praises her. She even treats with kindness those who were not polite to her before. We too have to forget our grudges and think about the children’s future.”

The Old Duke listened in silence to his son and daughter-in-law, but after a while he exclaimed because he couldn’t stand it any longer,

“Idiots! You’re a couple of idiots!”

“You want to side with the Imperial Family because Heinley supposedly avenged my grandson? I don’t know what I’ve done to deserve such a naive son like you!”

“Father, it’s true! Grand Duke Lilteang has been taken to a tower. I saw it with my own eyes.”

The Old Duke clenched his teeth to suppress the desire to insult him worse.

“Although Grand Duke Lilteang is famous for his loss of self-control, he is not crazy enough to cause serious trouble in such a place.”

“Grand Duke Lilteang has caused several serious incidents. He also holds a grudge against you. Besides, he didn’t do it openly, there was hardly anyone around the pond where Middelen was.”

If other nobles had been the witnesses, an investigation would probably have been conducted in a formal manner. But since it was the Emperor together with Duke Zemensia, the sentence in this case was immediate.

Of course, imprisoning Grand Duke Lilteang directly in a tower was a measure that could anger the Emperor of the Eastern Empire. Even if Emperor Heinley had been a witness.

Duke Zemensia believed that Emperor Heinley was willing to take such a risk to protect his people.

However, the Old Duke considered that point suspicious.

“Father, you always think he has an ulterior motive. Do you hate Emperor Heinley that much?”

“You are an idiot, an idiot. Emperor Heinley has marked us as his next target, but you want to support the person who ended your sister’s life.”

Unable to understand each other, father and son kept silent and turned their heads in different directions.

No matter what his son said, Old Duke Zemensia would not believe Emperor Heinley.

He was convinced that Emperor Heinley had deliberately put his grandson in danger to deal with Grand Duke Lilteang.

He didn’t know how exactly Emperor Heinley had done it, but it wasn’t normal for so many coincidences to happen at once.

The Old Duke clenched his fist, unable to bear his anger.

An idiot son, an idiot daughter-in-law, and selfish grandchildren. This was the family he had.

He was really angry that Emperor Heinley was playing with his mind and that of his family.

Sovieshu believed that everything was settled, and that it only remained to wait for the paternity test. The temple set the date for the test, so the nobles in the Eastern Empire looked forward to the arrival of that day.

Regardless of the test result, calm would not return to the Eastern Empire in the near future.

The test result will only determine the future of the princess, it will not erase Empress Rashta’s past.

A commoner who claimed to be the Empress’s real father disappeared after he boasted on several occasions about how much money he had obtained, but the nobles didn’t think much of it.

After all, this was a man who appeared one day out of nowhere to take money from his supposed daughter. It was not unusual for him to disappear again in search of more money, so it was easy to determine that the Viscount and Viscountess Isqua who stayed behind while that man disappeared were the Empress’s real parents.

However, two other unexpected scandals occurred amidst the silence. One in the Eastern Palace and one in the Western Palace.

It was Alan who caused the scandal at the Western Palace.

Alan sent letters to Rashta that Ahn had disappeared, but Rashta ignored him all the time, so he went to see her personally and made a fuss.

“How dare you make a fuss in the Imperial Palace? Take him to prison this instant!”

Rashta was so angry that she ordered the guards sent by Sovieshu to imprison Alan.

Later, Rashta wanted to take Alan out because it was not convenient for her that he was here, but the guards did not allow it because Sovieshu ordered to hold Alan in preparation for the paternity test.

“I was going to capture it anyway. Fortunately he came on his own.”

Sovieshu spoke coldly and forbade any visits to Alan. However, soon there was also a scandal in the Eastern Palace. It was quiet on the outside, but it shook Sovieshu’s heart.

Count Pirnu, who had attended Heinley’s birthday party, returned before the rest of the delegation to report.

“Your Majesty. Emperor Heinley wore your precious ‘Fairy Tear’ as a necklace at his birthday party.”

“What the hell are you saying? Are you sure about what you saw?”

“Yes, I checked it several times. It was definitely the ‘fairy tear’.”

“Navier must have given it to him. Otherwise, it wouldn’t make sense.” 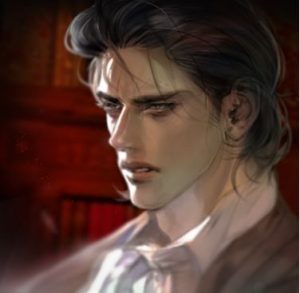 Sovieshu really wanted to smash him. He didn’t like Heinley in the least.

He thought that Navier might return the gift, but never that she would give her current husband the gift sent by her ex-husband.

Sovieshu was so surprised that he whispered his ex-wife’s name in vain. He couldn’t believe this from the honorable Navier.

However, the unpleasant news didn’t end there.

Count Pirnu reported in a careful voice as he watched Sovieshu’s somber expression.

“Another problem? What nonsense has he said this time?”

“No. This time it’s more serious.”

“He pushed Old Duke Zemensia’s grandson into a pond.”

Count Pirnu recounted the details of the incident as objectively as possible. He tried not to mix his personal opinion.

Sovieshu’s expression became rigid as he listened to the account. He rested his elbows on the armrests and rubbed his chin.

Count Pirnu’s account seemed a little strange to him. He knew that Grand Duke Lilteang resented Old Duke Zemensia and that he used to lose his temper easily. Even in the Western Kingdom he had been shamed several times for his impulsive behavior.

Although he had deliberately tripped people he didn’t like to make them fall to the floor, he never pushed a child into a pond in the middle of a party…

“He was rescued right away without a scratch. From what I could find out before I went back, he didn’t even catch a cold.”

Grand Duke Lilteang’s folly was worse than usual. The child against whom he vented his grudge was not injured. Besides, was it Emperor Heinley who witnessed the scene…?

If the situation were normal, Sovieshu would have brought back Grand Duke Lilteang for the pride of the Eastern Empire, no matter what he had done.

But after much thought, Sovieshu this time decided to accept Emperor Heinley’s sentence.

He had many doubts, but it suited him to do it.

In case the princess was not his daughter, it would be much better if Grand Duke Lilteang was not in the Eastern Empire.

“What do you intend to do, Your Majesty?”

“It is a shame for the Eastern Empire that he has committed such a crime in another country. It is not a bad idea to take this opportunity to put an end to his explosive personality. So we will not intervene.”

Count Pirnu also agreed because he did not like Grand Duke Lilteang.

Sovieshu pondered over something with a serious expression after he made that decision. He then wrote a letter and handed it to Count Pirnu.

“Send it to Emperor Heinley.”