Rashta opened her eyes in shock and asked,

“I don’t understand what happened. What drove you to do this?”

Duke Elgy still had a friendly smile, which made him all the more scary.

Astonished, Rashta took a step back, and his smile became softer and gentler.

“Does it matter why I did it?”

“It matters… It matters a lot! What did I do wrong?”

Although Rashta had recoiled from him instinctively, she shouted indignantly.

“What did I do for you to do this to me? I could expect it from Empress Navier. But why you?!”

“If I were you, I’d be more curious about something else.”

Rashta’s heart pounded and her legs felt weak, so she leaned against the couch. Duke Elgy spoke casually,

“Well. You’ll find out later. In any case, you don’t seem to have the ability to repay me right now. And I don’t think you will be able to repay in the future either. Am I right?”

Rashta looked at him without saying a word. She wanted to tell him that she would give him the money right away, but he was right.

Since Baron Lant managed her money, she had no money at the moment. Most of the jewelry and other valuables she received as presents ended up in the hands of the Isqua couple, Viscount Roteschu, and her real father.

Even after she stopped meeting Duke Elgy as often due to the rumors, the demand for money from others continued. She had also spent a lot of money to hire a mercenary and an assassin.

“Certainly, you can’t. However, the port is different. Your Majesty is not yet divorced, so I only have to show this document to the Emperor.”

Rashta’s eyes filled with tears that fell onto her lips, which had turned pale. She looked so pitiful that even the coldest person would sympathize with her.

Her heart ached because she really trusted Duke Elgy. This was completely different from the shock she felt when she found out that Sovieshu loved Navier.

Sovieshu was the man who saved her when she was in despair, the man she had loved. But Duke Elgy was the only person in whom she placed her trust, faith and friendship.

She felt her world crumble as the person she trusted the most acted so distant. Rashta couldn’t bear it and asked again,

“Just tell me why you are doing this to me. What happened?”

“I don’t get it! We got along well, right? You said you felt sorry for me, that it wasn’t my fault that I was born a slave. I…”

“Of course it’s not your fault you were born a slave, miss.”

Duke Elgy used to call Rashta “miss” during the days when she had been a concubine. At the time, when he talked this way she felt reassured.

Rashta looked at him, perplexed.

“I pondered whether I should use it. In the end, I decided against it.”

“Nonsense. But don’t think this is the end of it. The person who gave it to me seemed to have a different opinion than me.”

Duke Elgy smiled and brushed a lock of hair away from Rashta’s face.

“I too have felt curious to know why. I know what it feels like. Though knowing the reason doesn’t change anything, it’s unbearable not knowing why.”

Rashta’s eyes wavered slightly. It was very difficult for her to understand what he was talking about.

However, her disappointment and doubts suddenly vanished.

‘What does it matter now? A traitor is a traitor, and this man is scum.’

Without hesitation, Rashta raised her hand and slapped Duke Elgy on the cheek. 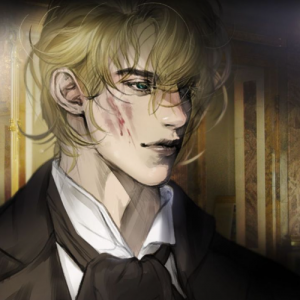 The slap echoed loudly in the room. A red handprint was drawn on his cheek. Drops of blood started to fall from one of the red lines that formed on Duke Elgy’s flawless skin. Rashta’s ring was stained with blood.

Although it must have hurt a lot, Duke Elgy smiled as if it was nothing. He really looked like a devil that came from hell.

Duke Elgy whispered to Rashta without a hint of anger, then grabbed the folder and left.

‘What did he mean by that…’

Rashta thought about it for a while, but soon laughed, feeling empty.

‘Never mind what he meant.’

Rashta laughed as tears welled up in her eyes.

Rashta finally came to a conclusion as to when things had started to go wrong. First it had been for Alan, then for this evil man.

Nothing that drives a person crazier than an unknown evil.

Sovieshu frowned for a moment when he was announced, but allowed him to enter. He also wanted to talk to Duke Elgy.

“I’m glad to see Your Majesty.”

Sovieshu looked at Elgy with eyes full of hostility and displeasure.

A few days ago, he had tried to send Duke Elgy back to his country using the excuse of Rashta’s scandal.

But after what happened in the temple, Sovieshu was also curious.

What exactly did Duke Elgy want?

At first, he thought the Duke hated him, but after he dared to bring Rashta’s first child to the temple, it seemed that his hatred was directed against Rashta.

However, that didn’t fully explain his actions either. Now he had a chance to find out the answer.

After thinking about it, Sovieshu hid his scorn and calmly asked,

“Why did you go to the temple on the day of the paternity test?”

“Because I didn’t know what to do with the poor kid.”

Duke Elgy took the folder with which he had surprised Rashta earlier and placed it on Sovieshu’s desk. The document and the carefully arranged promissory notes were revealed.

“Even if the borrowed money can’t be repaid, I at least want to take the port.”