Back in the Western Palace, Rashta’s hands trembled as she pulled at her hair.

She never expected that the Isqua couple would betray her.

The attempt to deceive the emperor was an extremely serious crime, which could not be compared to the attempt to kill Evely. For that reason, the High Court Judge sentenced them to death on the spot.

The sentence could only be overturned later if a paternity test showed that Rashta was their daughter, after all.

‘It won’t be overturned.’

Rashta shook her head. She knew that she was not their real daughter, so she was clear about the result if a paternity test were to be done. The sentence would definitely not be overturned.

Now, there was only one possible scenario. The Isquas would die as evil and miserable fallen nobles who conspired with the emperor’s concubine to deceive him, and Rashta would…

Rashta screamed and knocked over the tea set. It shattered with a loud thud, but she paid no attention.

Rashta found it hard to breathe. She could not believe it. Her charges would be compounded by Viscount and Viscountess Isqua’s scandalous confessions.

‘Because of lies told by that scum!’

It was a serious crime to deceive the emperor by claiming Rashta’s daughter was his biological child, but now, their marriage was seen as a ruse planned by Rashta. Part of her life had quickly been exposed as a sham.

“No! No! It isn’t true! That bastard Sovieshu was the one who asked me to marry him!”

Rashta screamed, pushed the table and kicked the chair.

“Duke Elgy was the one who brought the Isqua couple!”

She clenched her fist, kicked the bed in fury, bit a pillow and threw it on the floor.

Her anger did not subside no matter how much she screamed, writhed, pulled her hair and sobbed.

‘Viscount Roteschu was always a filthy piece of trash. But I really did love the Isqua couple. I even came to wish they were my real parents.’

Their betrayal became a spear lodged in her heart.

Rashta fell to her knees and sobbed. 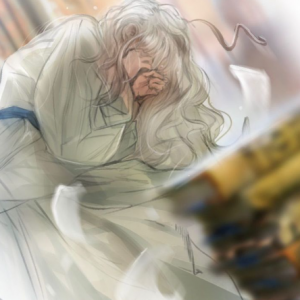 ‘Why does everyone betray me? Why is everyone so mean to me? Why doesn’t anyone support me?’

Rashta remembered how the people cursed as they threw eggs and fruits at the trial of Viscount Roteschu and Alan. And then she remembered the horrible voices that cried out for Empress Rashta to be sentenced with them at once…

Eventually, her fear became stronger than her anger.

“I must run away. Baron Lant’s suggestion to flee makes sense now. I can’t stay here any longer. Everyone blames Rashta!”

Rashta desperately called out to Arian, her most experienced maid. Although Rashta didn’t trust her, she couldn’t leave the Western Palace on her own.

Only Baron Lant could help her flee, so she had to call him.

Arian was startled to see the room turned upside down.

Rashta, her eyes filled with tears, made a request.

Arian hesitated a moment, but then she left.

Rashta wasn’t sure whether Arian would do this for her, but after a while Baron Lant arrived.

As soon as Rashta was alone with Baron Lant, she clutched at his clothes in tears and pleaded with him.

Baron Lant raised his hands awkwardly with a troubled expression.

His suggestion a few days ago had been impulsive, when he thought of the innocent Rashta from her days as concubine, but now he had come to his senses.

He still felt sorry for her, but there were too many factors to take into account and he could not act on compassion alone. Besides, the current situation was worse than a few days ago, when he suggested that she run away.

As Baron Lant hesitated, Rashta looked at him with pleading eyes like a puppy’s.

She looked so pitiful that it would make anyone’s heart shudder. Her black eyes looked like those of a trapped animal.

“I can’t help you all the way, but… I’ll help you leave the capital.”

In the end, Baron Lant acceded. Although he could have turned a deaf ear to Rashta’s request, he felt that he would have nightmares for the rest of his life if he didn’t help her.

“Thank you! Thank you so much!”

“We must get out of here right now.”

“But the knights will prevent me from leaving the Western Palace.”

“I can distract the knights for a while. It’s not easy, but once is enough to succeed, so hurry up and take all your money.”

Rashta didn’t have much money left. When she asked the Isquas to leave, she offered them most of the jewelry she had. Rashta never had direct access to funds as Empress, so she couldn’t use them.

Still, Rashta began to search every corner of the room. In a place where she would have no connections, identity or relatives, only money could help her. So she decided to take anything that could be used as money.

“I’ll go ahead to make the necessary preparations…”

Baron Lant had already prepared a carriage for Rashta a few days ago. He glanced at his watch.

“In 30 minutes, I will have the knights abandon their posts at the gate of the Western Palace. Go out that way, head for the corridor and continue straight ahead.”

“Dress as you normally would until you reach the gate. Once outside, put on a cloak to cover your clothes and your face.”

Baron Lant left the room. She was still busily moving about, collecting jewelry and valuables. At the same time, she kept an eye on the time.

Rashta left the room 15 minutes later. She calculated that it would be better to leave now, even if she hadn’t yet collected all her valuables, rather than run out of time.

However, she was surprised as she entered the drawing room. Arian seemed to be waiting for her.

“Didn’t you say… you were going to do the laundry?”

Rashta stammered and examined Arian, whose expression was stiff, not her usual obedient, calm expression.

As soon as Rashta saw her, she guessed that Arian had made an important decision.

‘She’s clearly going to rat me out.’

Rashta’s face became pale as she stared menacingly at Arian.

“Your Majesty, if you run away, it will only make your situation worse. It will be better if you face the accusations.”

However, Rashta believed that Arian had ulterior motives.

‘Since when does she care about me?’

Arian didn’t even dissuade the maids when they stopped obeying Rashta.

If it hadn’t been for the article about how often Rashta replaced her maids, she would have immediately reassigned Arian or fired her.

Rashta was surprised that she now spoke to her like this.

“Your Majesty, you must defend yourself if you did nothing wrong. Otherwise, you must pay the price. It is not a good idea to run away.”