Despite the deep desire of Sovieshu and Marquis Karl, Glorym was not found.

A thorough search was carried out in the villages and in the nearby forest, and even, with the consent of the neighboring countries, in all border villages, but the silver-haired baby was not to be found.

The chance that the baby could survive alone in the forest was slim to none, so the knights were sorry to report that Glorym had most likely died.

Sovieshu went back to sleep. He could see the people he wanted to see, even if it was only in his dreams.

Sovieshu performed his daily work flawlessly and acted normally in audiences with the people, so many believed that he had forgotten the devastating news and returned to his original role as Emperor.

However, he drank five to six bottles of hard alcohol a night. Even with the door closed, crying could be heard from his bedroom.

“His Majesty is damaging his stomach, so he must not drink any more alcohol. Please stop it.”

The palace doctor, who couldn’t bear to see Sovieshu drinking himself sick, pleaded with Marquis Karl. But Sovieshu was the country’s Emperor, and there was no way his secretary could stop him.

But before the news about Navier came, another terrible piece of news about Glorym arrived.

One of the knights in charge of the search in the forest had found Glorym’s bloodstained clothes in a cave.

Since the bandits believed the baby might belong to an important noble family, the Celestial Lord of the Eternal Thousand bandits ordered to fake her death just in case, and his subordinates deliberately used the baby’s clothes to achieve this.

The knights did not know that the Eternal Thousand bandits had taken the baby and were sure that Glorym had died.

Sovieshu completely lost his senses when he held the baby’s clothes.

As he held the baby’s clothes with both hands, he couldn’t close his mouth and his eyes widened. He had seen these clothes on the baby before.

“My daughter. My little girl. My baby.”

With a lump in his throat, he fell to his knees and clutched the baby’s clothes against his chest. Tears slid down his face. 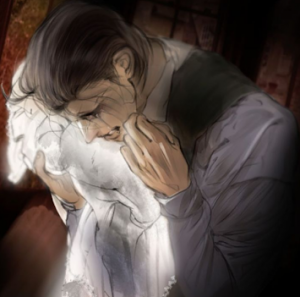 Sovieshu entered his bedroom and walked over to Glorym’s painting.

Hugging the blood-stained clothes, he let out a deep sigh as he looked at Glorym’s portrait, painted on the days when she was healthy and happy.

He remembered her little limbs, her wide smile, her cute lips, and the first time he heard her say, ‘aba, aba’

Sovieshu sighed and writhed in pain.

‘I threw her out, such a lovely baby, my own daughter. It’s like I killed her.’

He remembered how the baby wiggled in his arms. She was very small and fragile. A baby to be protected. She was the most precious, the sweetest baby in the world.

Sovieshu couldn’t stand it. He sobbed and hit his head against the wall.

‘Navier died. My daughter died. It was all in vain.’

The loss, anger and frustration that grew inside of him was unbearable.

The pain he felt every time he hit his head against the wall momentarily suppressed the pain in his heart.

His secretaries barged in to restrain him, but Sovieshu shook them off and continued to hit his head against the wall.

He didn’t stop hurting himself until his forehead started to bleed.

Sovieshu felt his heart almost jump out of his chest when the baby, whom he had abandoned, appeared in front of his eyes, frightened, as if she was waiting to be found before dying.

A knight of the Imperial Guard, who couldn’t bear to see Sovieshu’s current state, approached him and knocked him out with a blow to the back. He was prepared to receive a severe punishment, but he did it anyway.

However, Marquis Karl indicated to the knight that he had done the right thing.

The same knight took Sovieshu to his bed.

“Wouldn’t it be better to tie up His Majesty… until he calms down a bit?”

The Emperor seemed completely out of control, so much so that he didn’t mind hurting himself in front of other people. The knight was worried about what else he might do impulsively.

Marquis Karl thought about it for a moment but shook his head.

“We can’t do it without a good reason.”

Marquis Karl also believed that Sovieshu was in a serious condition, but he didn’t dare to bind the Emperor.

“What about the envoy who traveled with Evely to the Eastern Empire? Has he still not returned?”

“Well, it’s still too soon to expect his return, but… I hope he’ll be back sooner. I think that will calm down His Majesty a bit.”

Marquis Karl hesitated as to whether he should take the baby’s clothes away from Sovieshu. In the end, he carefully hid them and left the room.

Leaving Sovieshu alone was a mistake.

When he woke up, Sovieshu saw the two paintings in his bedroom and wept profusely. The two women in the paintings merged in his tear-clouded vision.

Navier and Glorym. His beloved wife and his beloved daughter. The perfect family that he had always dreamed of appeared before his eyes.

Sovieshu beat his chest as he cried and shouted their names. He stretched out his hands reaching for the wife who had always been by his side, and called out to her,

“Navier… Help me, Navier. It is painful. Navier. Please help me.”

However, when he recalled the news from the Western Empire regarding the attack that resulted in Navier in a coma, his shoulders shook and he laughed strangely. He wasn’t truly laughing. The laughter was the result of his sadness peaking.

‘I should have stopped Navier from going to that bloody country.’

It seemed to him that Navier looked unusually pale in the painting today. Like a corpse.

Sovieshu believed that Navier had died, just as his daughter.

As he sobbed, he suddenly became frightened.

‘How terrified would my daughter be without her father by her side? She must be very afraid.’

It scared him to think that if he did not hold her hand tightly, she would not be able to move forward. Even now, she was separated from Viscountess Verdi, who cared for her.

‘Such an angelic baby deserves to go to heaven. But she won’t be able to find that path as she cries and calls for her father.’

Sovieshu ordered a servant to bring alcohol and drank again.

After he drank a lot, an illusion of Navier appeared in front of his eyes. The illusion appeared every time he drank.

Navier spoke to Sovieshu, who was in tears.

“You’ll do well. The only one who made a mistake was me.”

‘Could it be because I started talking about reality?’

Sovieshu stood up and looked around.

At that moment, he saw Navier walk away through the window. She was wearing the same dress she wore on the day when they fought over Rashta.

Just like then, Sovieshu’s hands were resting firmly on the windowsill. The difference was that now he was crying and shaking his head.

He apologized several times, but then he saw a person standing on the roof.

It was Rashta. She watched Navier walk by as her blood-soaked silver hair fluttered.

As he repeated these words in his mind, Rashta turned her head toward him.

She smiled broadly, blood pooled around her mouth, and pointed down with her finger.

But Rashta jumped off the roof toward Navier.

Sovieshu screamed and jumped out of the window.