Meanwhile, Heinley was slumped in his desk chair, while McKenna and the Chancellor worked.

He had parted ways with Emperor Sovieshu after a brief welcome talk, feeling upset. The bad mood drained him of energy and motivation, so now he didn’t want to do anything.

Fortunately, Sovieshu himself had said that he couldn’t talk much because he wasn’t feeling well, but…

Sovieshu looked much better than Heinley had expected. Of course, that didn’t mean that he had fully recovered. He might only seem fine on the outside thanks to Evely’s healing magic.

“I don’t know how to explain it, but it annoyed me to talk to him. What do you think, McKenna?”

“Your Majesty has always been annoyed to see Emperor Sovieshu.”

“I haven’t spent enough time with Emperor Sovieshu to claim that he was especially strange today.”

Heinley just nodded. Normally he would argue with McKenna, but today he was in no mood to do so.

— Welcome to the Western Empire.

— I appreciate you for lending the mages to us.

It was an inconsequential conversation, but…

“His eyes had an unusual look.”

“They looked earnest and youthful.”

“Exactly. He didn’t have that liveliness in his eyes before.”

“Given the current situation, there should be no reason for his eyes to sparkle.”

In fact, Heinley had doubts about Sovieshu’s true health condition.

Heinley didn’t even notice that McKenna had tried to tease him by complimenting Sovieshu’s eyes as he described them.

As a result, McKenna started to think seriously about Sovieshu’s appearance earlier. But as he recalled the welcome, he found nothing unusual.

‘Marquis Karl seemed to take special care of Emperor Sovieshu, but… it is likely that it was because he has not fully recovered.’

At that moment, there was a knock at the door.

The person who entered was Mastas. In her hands, she held a painting covered with a cloth.

“It’s a gift from the Empress to Your Majesty.”

Mastas quickly approached and held out the painting. McKenna received it and placed it on Heinley’s desk.

Heinley was puzzled but lifted the cloth with curiosity. Less than two seconds later, he covered the painting again.

“Yes, the Empress painted it herself for Your Majesty.”

Once Mastas bowed and left, Heinley held up the cloth that covered the painting once more and showed it to McKenna.

“What do you think this means, McKenna? The painting does not have a title.” 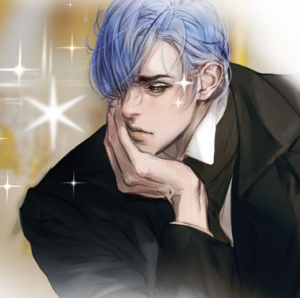 The painting was a realistic depiction of a cemetery, and an excavated grave at the center. A coffin was slightly visible amid the piles of dirt. On top of the coffin were two intertwined wedding rings.

“Emperor Sovieshu is here, so behave yourself. If you don’t, I’ll bury you in a grave. That coffin is for you… No, I know. It’s more like, ‘If you don’t behave properly, our marriage will be buried in a grave.'”

Heinley found this interpretation so absurd that he flatly denied it, “No, it’s definitely not that.”

The chancellor, who paid attention to the conversation from the side, approached.

“Your Majesty, I am well versed in the arts. Particularly in painting. If the gift is a painting, I can interpret it for you.”

When Heinley showed him the painting, the Chancellor meticulously examined it up and down, several times. Soon after, he nodded his head as if he understood.

“What does it mean?”

When Heinley asked with skepticism, the Chancellor explained with conviction.

“The two wedding rings symbolize a couple, while the grave symbolizes a tired mind. In other words, Her Majesty is now dissatisfied with the marriage.”

“What the Empress Navier wants to say through this painting is that she is unhappy at Your Majesty’s side.”

Heinley refused to believe such absurd interpretations, so he indignantly ordered McKenna and the Chancellor to leave.

However, he was a little nervous. Navier would not communicate something unpleasant through a gift without a good reason.

‘Did I do something that she didn’t like? Did she try to express it through a painting because it was hard for her to say it directly? Could it be because I laughed at her for too long when she tried to act like a commoner?’

‘What will Heinley say when we meet for dinner? Will he apologize to me for making fun of my artistic talent before? Will he be moved by the meaning of my painting? I hope he won’t be sad anymore.’

It doesn’t matter what he says. I just wanted to make Heinley feel better. I hoped he would come back soon.

However, around dusk, Heinley still hadn’t arrived. While I waited, one of my attendants arrived.

“Your Majesty. The flood could happen at any time, so we must send the mages to Yorne as soon as possible. Emperor Sovieshu says that Her Majesty’s presence is required to resolve this matter.”

“Why is my presence necessary?”

Of course, it was only an excuse. Why would my help be needed to send the mages to Yorne?
If the issue is about how the temporary dam will be built, there is no need for me to opine. There is no need for Heinley to become involved either. It is a matter to be decided by the experts.

I’m not in charge of building the dam and I’m not an expert in construction, so why would Sovieshu say my presence is necessary? Evidently, it was one of his whims.

“Emperor Sovieshu heard that Your Majesty was the one who came up with this plan.”

I suppose it’s an adequate excuse. And although I didn’t want to see him… I couldn’t avoid him for two weeks.

“Where is His Majesty Heinley?”

“His Majesty is in the Twilight Hall with Emperor Sovieshu.”

I nodded, adjusted my dress and went out to meet them.

As I walked, I tried to keep my expression as cool as possible.

I was not going to meet him as his ex-wife, but as the Empress of a neighboring country. I had to draw that line clearly.

Even if I later thanked him for sending Evely, I had to show a harsh and unfriendly attitude for the moment.

When I arrived at the Twilight Hall, the knights opened the doors for me. While I waited, I took a deep breath and shrugged my shoulders to maintain my composure.

When the large doors were fully opened, I saw that Sovieshu and Heinley were seated at the table across from each other. As I entered, they both stood up and turned to me.

After I politely greeted Heinley as if I hadn’t seen him earlier, I turned to Sovieshu. I intended to greet him properly before turning my attention back to Heinley.

What I saw was a man who was mesmerized, as if he had seen something awe-inspiring.