The Sleepless Night of the Maid — Chapter 85

He knelt down further, grumbling and ignoring their stinging gazes. He seemed to have no sympathy for the two women whatsoever.

He had only intervened because the thugs were occupying his place. And the only reason he helped Eva was because she had used the magic word: money.

Eva staggered over Cecil and stood up. Even if he didn’t have good intentions, the only person they could rely on now was this man. The presence of good intentions was trivial compared to the absence of bad intentions at this point.

The man put his hands under Cecil’s legs and shoulders and picked her up lightly as if she was a doll.

Eva couldn’t understand the man’s words at once and asked again.

“Tell me the address of the house you originally intended to go to.”

Flustered, she took out the piece of paper with the address written on it from her pocket. The immediate fear was gone, but some fear still lingered. One of those fears was the man robbing her and fleeing.

As soon as he saw Eva’s note, he began walking without waiting or hesitation. It seemed like he knew the neighbourhood like the back of his hand. Fearing that she’d get left behind, Eva quickly grabbed the luggage lying around and caught up to the man.

They walked a long way before coming out of the dark and gloomy area. While following the man along the main road, Eva realised that this was where she got off the wagon. Because the driver had parked it on the right side of the main road, they had entered Hastings on the right instead of Wellington across the street on the left.

As they entered the other side, Eva immediately felt the difference in atmosphere. It was not a fancy area, but the houses here were pretty neat and assorted, and there were warm lights leaking out.

Suddenly, the tip of her nose became cold. Only after escaping the dark, cold, and life-threatening Hastings did she realise how comforting a single candle in a house would be.

The strange man, blinking several times to wet his dry eyes, stopped in front of a house. It was a small house with a low staircase leading to the front door. As he strode up the stairs, he blinked at Eva, who was next to him and nodded towards the door.

Eva understood the meaning of the words belatedly, hastily put down her luggage and knocked on the door. The man’s eyebrows furrowed and his voice raised a little.

Eva, not knowing what she was sorry about, knocked on the door with all her strength not to offend the man. Still, there was no sign of movement inside, so this time she became impatient and banged her fists against the door.

After a while, she heard a chuckle from inside and the door opened with a creak. The face of a middle-aged woman in a nightgown peered from behind the latch that connected the door to the wall. It was clear that she was wary of the uninvited guests at night, but she still made a good and gentle impression.

“Are you Mrs Leona?”

Eva swallowed the lump in her throat and asked. She wanted to stop wandering around and being chased. She just wanted to sleep comfortably in a safe place. So, she was worried about what would happen if this woman was not the person Eva was looking for again.

When Eva told her her name, the woman’s vigilance turned into curiosity.

“I came here on the recommendation of Father John. I’ll show you the letter…”

Tears welled up in Eva’s eyes now that she was reassured. She couldn’t see properly, having trouble looking for the letter, but the woman unlocked the latch and opened the door.

Mrs Leona came out and greeted them, taking their luggage.

She was Father John’s sister.

Eva was even more relieved by that fact and followed the man who entered first and stepped inside.

In the dim light, her eyes scanned over the interior. The small drawing room had very little furniture except for sofas and tables. In the kitchen, there was only an old table and crockery. However, the warm curtains, cushions embroidered with pretty flowers, and rag dolls arranged neatly gave the house a cosy atmosphere.

Seeing Cecil drooping, Mrs Leona hurriedly opened a door, leading Eva and the man inside. Clean sheets were laid out on the bed in the empty room, and women’s clothes hung on the wall. It must have been the owner’s room.

“Lay her down here.”

Mrs Leona straightened the sheet on the bed and the man put Cecil on top of it. Contrary to the carefree expression on his face, he was very careful about laying down the injured Cecil.

Mrs Leona covered Cecil with a blanket quickly, checked her condition, and then stood up.

“I went to your old house b-but you had moved, so I… I got lost and ran into people…  bad people… This man helped…”

She tried to explain it calmly, but Eva’s haphazard reply was confusing.

They got lost while looking for Mrs Leona, came across thugs and almost suffered a terrible fate twice. That’s why it still felt so scary and hard to speak right now.

Eva’s voice slowly turned inaudible. She was terrified she’d break down right there and weep uncontrollably. She was afraid she wouldn’t be able to take care of Cecil and lose her mind.

“Oh my. Looks like you went to Hastings. I’ll give you a cup of hot tea, so don’t worry, sit in the chair.”

Mrs Leona gave Eva a pitiful expression and left some candles behind for Eva to warm up.

She would much rather lie down next to Cecil than drink tea, but she still had work to finish.

Eva turned to the man who had been silent the whole time. The face of the man had now been lit by the candles. His hair was shiny silver, and his face was tanned. His skin looked like polished copper. A smooth nose under dark eyebrows, indifferent but sharp grey eyes, and tightly closed lips. Overall, he looked like a stubborn but strong man.

“Thank you. How much money do I owe you?”

The man bluntly named his price as if he had decided beforehand.

It was a lot of money, but it was small compared to the cost of their lives.

Eva took the money out of the trunk and handed it to the man. He took it without a word and turned to leave. The man seemed like he hated talking to people. Or maybe he was just grumpy.

Eva hurriedly called out to him. Turning around, he fixed her with an expressionless gaze. No matter how angry he seemed, she could not just let her lifesaver walk away like that.

The man did not answer Eva’s question. He narrowed his eyes as if asking why she was asking him such a thing, his expression changing for the first time.

“I want to pray for you and thank you.”

Eva quickly added words to dispel the man’s suspicions. Hearing her response, his expression strangely softened. Like the flickering flames of the candles, the man’s silver eyes fluttered slightly. 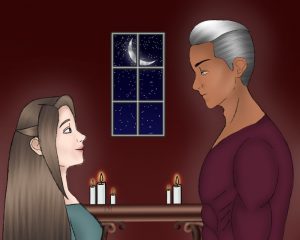 After hesitating for a moment, the man answered. She felt like she had heard the name somewhere before, but she didn’t have the energy to think more deeply.

He left the room, and she heard the front door open and then shut. Appearing to save Eva at the moment she needed it most, he vanished as if nothing had happened.

Eva approached the sleeping Cecil and sat down next to her. She bent over quietly, brushing away the hair from Cecil’s face, and smiled sadly.

“We are finally in Montana, nanny. It won’t be hard anymore. So let’s be sick today, cry and grieve today, and from tomorrow onwards, let’s be happy.”

As the tension and fear that had been wrapped around her as heavy as a chain disappeared, all the energy in her body drained away.

Merry Christmas! The art of Hayden and Eva was created by Mango Kitten!  🙂